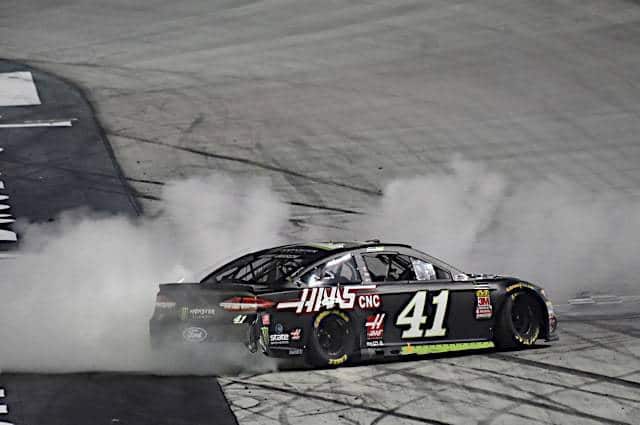 With rumors running rampant about his NASCAR future, Kurt Busch proved he’s still got plenty of talent in the tank. In a wild event, Busch emerged at the end to capture the Bass Pro Shops/NRA Night Race at Bristol Motor Speedway Saturday night (Aug. 18). It’s the first Monster Energy NASCAR Cup Series victory of the season for the Monster-sponsored driver, clinching him a spot in the playoffs.

“It just matters to win — it’s all about winning,” Kurt Busch said. “I’m glad we did. We’ve been the most consistent team this year that hasn’t won.”

The elder Busch took the lead for the first time with 24 laps to go and held off Kyle Larson, who had 30-lap fresher tires, to capture his sixth win in Thunder Valley. It was his first at the track since 2006, before the track surface was changed.

“This track’s been kicking my butt since they redid the concrete,” added Kurt Busch. “It’s great to win on the old [Bristol] and win on the new one. It’s been awhile.”

The win was the 30th of Kurt Busch’s career but the first for crew chief Billy Scott. It’s also the first for the 40-year-old driver since last year’s Daytona 500.

“It’s awesome to [break the winless streak] at Bristol. I love this place,” Kurt Busch said. “I have great teams that have always helped me win. Early on, before I won my first ever race, [I thought] if I can get to 30, that’s a pretty special career.  Made it tonight.  I’m choked up about it.”

Larson finished second while Chase Elliott, Joey Logano and Erik Jones rounded out the top five. Clint Bowyer slipped from second on the final restart to finish sixth. Ryan Blaney was seventh while Alex Bowman, Jimmie Johnson and Kevin Harvick filled out the rest of the top 10.

Larson took the early lead after starting the race from the pole, but chaos broke out on just lap 2. Kyle Busch bobbled on the inside of Blaney and spun after contact with the No. 12. Kyle Busch blocked the track and 15 cars were collected — ending the day for Michael McDowell, Darrell Wallace Jr., A.J. Allmendinger and Gray Gaulding.

Kyle Busch stayed in the race but lost two laps in the melee. That would start a rollercoaster night for Busch, winner of the last two Bristol events, while breaking the race wide open for someone else to take control.

For a while, that man was Blaney. Undamaged in the early incident, he took the lead from Larson on the next run and simply took off. Kevin Harvick eventually ran him down, leading to a fantastic duel up front. Harvick went underneath Blaney in the final corner of stage one, and the pair finished side-by-side — Blaney edged Harvick by .003 seconds.

Last week’s Michigan winner, Harvick, may have well had the fastest car again. The No. 4 Ford was tracking Elliott for the lead in the next stage when Harvick got out of the groove and nearly hit the wall. He kept going for a few laps, but a tire went down causing an unscheduled green-flag pit stop. That took Harvick off the lead lap until the race’s final moments; he was forced to settle for 10th.

That left Blaney, Elliott, Aric Almirola and Joey Logano swapping paint for the lead in stage two. Mirroring the stage one finish, Elliott got to the inside of Logano and was ahead of him for a second before Logano came roaring back on the outside to win.

Meanwhile, Busch and Harvick had a similar battle to be the first car one lap down. Harvick dove to the inside of Busch and almost made contact, but Busch held him off to get back on the lead lap for the first time since the race’s first caution. It was a crucial moment that kept Harvick from being a serious challenger down the stretch.

Heading to the final stage, Logano gapped Elliott after the restart. But Elliott caught back up to him with just over 200 laps to go. Elliott bumped Logano then did a slide job to the take the lead away from the No. 22 on lap 298.

That’s when Almirola’s great night hit a bump. At around lap 310, his car started leaking fluid around the track, but he stayed in the top five through it all. NASCAR eventually black-flagged him, forcing Almirola to give up his fifth-place spot and fall several laps down.

With around 150 laps to go, the caution flew again when Reed Sorenson slammed the wall. All the leaders pitted, as they could make it the rest of the way, and new contender Bowyer beat Elliott in the race off pit road.

Elliott couldn’t get going on the next restart and fell behind Logano and Martin Truex Jr. while Bowyer drove away.

Truex caught Bowyer with 118 to go as the top four remained within half a second. Meanwhile, Kyle Busch had worked his way up to sixth and was reeling in the leaders while they raced.

The front two put some space on the rest of the field until Kyle Busch caught them. But that’s where Busch made a second mistake. He got into the back of Truex when the two battled on lap 431 and sent the No. 78 into the inside wall, collecting JJ Yeley in the process. The wreck ended Truex’s night and damaged Kyle Busch’s car, forcing him to give up his second-place spot to make repairs.

Bowyer held the lead on the next restart and Kurt Busch followed him through. Behind them was a crazy battle for third featuring bumping and banging between Jones, Johnson and Larson. During this run, Kyle Busch worked his way back to sixth.

The caution flew again when Brad Keselowski spun and most of the cars behind Bowyer and Kurt Busch pitted for tires. On the lap 477 restart, Kurt Busch took the lead from Bowyer.

“It was up to Bowyer to choose the lane. He chose the outside, and we got a perfect start on the inside,” Kurt Busch said. “I dug it perfect right into Turns 1 and 2, and the spotter [Tony Raines] said, ‘Take it. Take it,’ which meant go to the wall on exit, and I didn’t even bother to look in my mirror.”

Kyle Busch, meanwhile, was working his way back into the top five when he made contact with Chris Buescher as a result of three-wide racing. His tire went flat a few laps later, causing a spin that brought out the night’s final caution. Busch wound up 20th in the final rundown.

That put Bowyer and Busch on the front row one last time. But Bowyer had a terrible restart, jamming up the inside while Busch held the lead with Larson on his bumper. The No. 42 car gave a valiant effort but fresher tires weren’t enough to pass the No. 41.

“With the heat cycles, Larson starting behind me, I had no doubt in my mind I needed to own the high lane, as is Larson’s MO,” Busch said. “If you take somebody’s strength away, that means you’re ahead of them.  It just worked out where I had track position, I had the lane to choose, I hit my restart, then you just check out.”

Seems like almost every week we hear that somebody won a “wild race” the day before. The only thing wild about Bristol was the number of cars that got wrecked. Other than that it appeared pretty tame. Maybe wrecking is racing.

Right after one of the wrecks Dale Jr. went into a lengthy monologue about wrecks being why we loved Bristol. He didn’t say “wrecks,” referred to them as “drama,” but Jeffie then had to try as best he could to walk it back and explain that no, fans don’t come to races hoping to see wrecks.

Busch winning means that three of the four Stewart Haas team cars have wins this year. I will be rooting harder than ever for Almirola, to make it four of four.

At least the driver in the fourth car has a chance to win.

I was fortunate enough to get hospitality passes for the night race back in 2000. Back then it was nearly impossible to get a seat. It was the most magical race I have ever attended. The crowd was electric and the roar they made almost have you goosebumps on a hot summer night. The old Bristol gave fantastic racing, with constant bump and runs and hard racing. I remember very vividly the leader was always in traffic passing lapped cars which made the racing tight all night long. I know the old Bristol with constant 36 degree banking is gone and were left with this progressive banking carp but every year I hope to hear that I will hear that there going to repave and try to bring back a little bit of what made Bristol great.
Last night’s race was not wild nor was it great. I don’t want to see wrecks every other lap but I do want to see bump and runs, tight racing ALL night long, and upset drivers. Bristol used to create drama for upcoming races. The closest we got last night was MTJ kicking his car and after that it was water under the bridge. Truex couldn’t say too much since JGR is feeding FR with cars and technical support. MTJ’s girlfriend had more emotion on Twitter and even called Busch a moron.
Bristol reminds me more and more of the Dover race anymore. Everyone kind of strings out with a pass here and there with the occasional caution. For a long time fan; Bristol is broken! They ruined the track with the repave and the current car doesn’t help. This was far from a wild race and it should be an embarrassment for what the attendance has been.

Did you people actually go to the race? I did, and found it to be just as wild as the article states. Also, I have been attending races there since the 80’s.