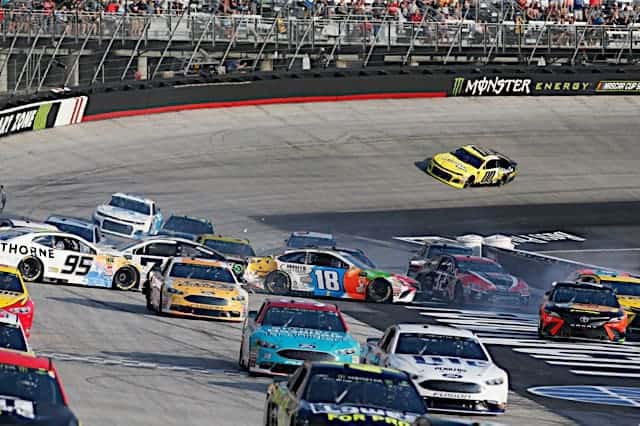 Kyle Busch had himself an eventful night in Saturday night’s Bass Pro Shops/NRA Night Race at Bristol Motor Speedway (Aug. 18). Busch was at the center of Thunder Valley’s storm from the drop of the green flag.

Coming off Turn 4 on the second lap, Busch got loose underneath Ryan Blaney. The resulting spin sent the No. 18 car sideways, blocking the track in front of the entire field. Once the smoke cleared, 15 of 40 cars received at least minor damage.

“I was trying to stay out of the glue [VHT] because I knew it was going to be slick to start with,” Busch said after the race. “I got a little bit more into the glue that lap. Every lap I was going to try to work my way down, and the guys on the outside were pinching you a little bit.

“When I got into the glue, it slipped out of the glue and right back into the middle of the racetrack. Whoever was on my outside, I hit them in the door and it just went around.”

The No. 18 car lost two laps repairing the damage, which included the rear bumper cover that was torn off. Busch remained two laps down for the next 182 laps, then took the wave-around to get one lap back on lap 203 when David Ragan crashed on the backstretch.

In the closing laps of the second stage, Busch edged out Kevin Harvick for 20th, receiving the free pass and getting back on the lead lap.

The No. 18 then drove up to ninth before pitting under caution to repair for more damage. The fuel cell was so crunched in pit stops were lengthy and difficult; every one cost him track position. But between laps 359 and 445, Busch drove from 16th to third. He somehow still had the fastest car on the racetrack.

But ultimately, a second mistake led to his downfall. While battling Martin Truex Jr. on the frontstretch, they made contact in a wreck that ended the No. 78 team’s race.

“That was just a misjudgment on my behalf. I crashed the [No.] 78,” Busch said. “Totally misjudged that one coming off the corner and knowing there was so many laps left, I wasn’t even in a hurry. I just misjudged it by four or six inches.

Adam Stevens then elected to bring Busch down pit road for four tires but those refueling problems remained costly. The slow stop dropped the No. 18 car to 11th.

Busch drove through the field once more, making a last-ditch effort for victory. But he made contact in a three-wide battle with Jimmie Johnson and Chris Buescher, cutting down a left-rear tire and ending Busch’s shot at a win. The No. 18 car spun once more, bringing out the final caution and relegating him to a 20th-place result.

“We probably finished where we should have with as torn up as our racecar is,” Busch said. “We had a shot to be able to come back there and win the race realistically if it wasn’t for getting caught up with the [Nos.] 37 and 48. If I could have gotten clear of them, I think I would have had a shot at them.

“Monday morning quarterback also says if we just inherited fourth and not pitted on that last pit stop then we may have been ahead of all that and been able to race differently. We certainly were going to way overachieve tonight, we just didn’t get to.”

Busch came into Bristol with a streak of five consecutive top-five finishes. But the bad run Saturday night shouldn’t cost him the regular season title. The team lost just 19 points to Harvick in the standings and Busch remains 43 markers ahead with two races left.

The series next heads to Darlington Raceway, where Busch has one victory, coming in 2008.

No matter what you think of Kyle Busch, he was very entertaining to watch.

Yeah! It’s great watching him try to take out as many contenders as he can.

Another Viewpoint
Reply to  DoninAjax

It’s always fun hearing from the kids on the short bus. Now kb and Donin, hop back on and let the nice man take you home.

Of course, this near “miracle” was only made possible with the benefit of a wave around and a free pass.

Another Viewpoint
Reply to  Carl D.

How about Watkins Glen where he did the same without benefit of a wave-around or free pass?

Busch showed once again how he thinks he is the only driver who matters on the track. I think it’s funny that he went to Bristol to run 2 races thinking nobody could beat him in either one. And he got taken down a notch or two. He needs this quite often which should tell you about the size of his ego.

And when I saw how his crew chief Adam Stevens (aka Homer Simpson) reacted to Busch’s last crash of the weekend, I knew then those two make a good pair. They are exactly alike.

Kyle continually drives using his right foot instead of his brain. I hope he doesn’t stop or he’ll win a lot more.

Everybody bitches about the lack of passion in the current batch of drivers, you know, the excuse me bunch. I was a huge fan of Mark Marin, class and all types of respect from other drivers. 42 Mark Martins on a track would make for a boring race. I agree about his boorishness, childish acts and all the bs you have heard a million times. No one can deny his passion for winning. Anyone bitching a Dale, Sr. fan? How many competitors did he run over?