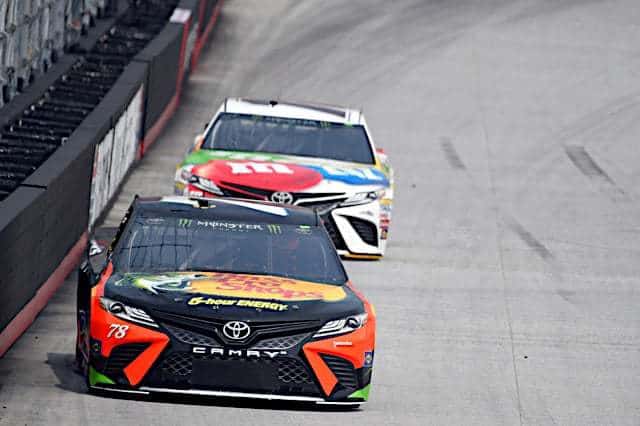 The story of the 2018 Monster Energy NASCAR Cup Series season has been the Big 3: Kevin Harvick, Kyle Busch and Martin Truex Jr. The three have combined to win majority of the races this season. But to this point, through 23 races there had not been much contact between the three. A lone bump-and-run win between Harvick and Kyle Busch at New Hampshire last month served as the only drama.

Truex, especially had not had any drama with the other two; in fact, he hardly even raced them in his wins. But all that changed on Saturday night (Aug. 18) at Bristol Motor Speedway.

On lap 432, Busch, who came back from being two laps down, caught up to Truex, and the two began to race. The battle did not last long, as Busch got a nose on the No. 78 car and clipped him coming off of Turn 4.

Truex sailed off into the inside wall. After he violently bounced off, the No. 78 Toyota went back up the track and was hit by J.J. Yeley.

“Just hard racing at Bristol,” Truex said. “Corner exit’s really slick where the VHT wore out, and there’s some real slick patches. I’m sure he hit one of them, probably didn’t, obviously didn’t do it on purpose.

“Probably could’ve used a little more patience, he was a lot faster than me at the time. And he just caught me; probably in another lap or so, he would’ve went by.”

The wreck ended Truex’s night when he had a car that could’ve potentially won. Truex was trailing Clint Bowyer at the time but believed he could have gotten around the No. 14.

“Half [Busch’s] fault, half my fault for following the [No. 14] so long,” Truex said. “I should’ve knocked his butt out of the way because he held me up for 15, 20 laps, and [I] burnt my front tires off screwing with him. Playing too nice and got the crappy end of the stick.”

While it was the first time Truex and Busch have had an incident this season, they also had one last year at Indianapolis Motor Speedway where both cars ended up in the garage.

“I seen him coming, I didn’t know he was going to run into me,” Truex said. “Usually we race great together all the time. We had one incident last year, and it was my fault totally. We had this one incident tonight, and obviously, it was totally his fault, but I guarantee he didn’t do it on purpose.”

Truex may have handled it well but the Twitterverse lit up with opinions and anger toward Busch. Perhaps the most notable frustration came from his longtime girlfriend, Sherry Pollex.

Omg I can’t believe that just happened. Kyle Busch is a moron

Truex has 19 career wins in MENCS, but none of them have occurred at a short track. The closest he came before Saturday night was Richmond Raceway last fall when Kyle Larson beat him to take the lead on a restart before Denny Hamlin spun him into the wall.

I think Kyle Busch is an arrogant ASS! He doesn’t care who he wrecks physically; including himself (stupidly) as long as it means he gets even a small chance to win. Martin Truex, Jr. could have been badly hurt, and he’s, sort of, Kyle’s teammate,, for gosh sakes. I think NASCAR needs to fine him, or pull him out of race or two (just like they do crew chiefs and car chiefs) for his over-aggressive, unsportsmanlike driving and his childish, unbelievably arrogant attitude!

Another Viewpoint
Reply to  Natalie Hazell

So, I assume you want all drivers who wreck somebody (you like better) to be fined or suspended. That would include pretty much the whole field, most notably Ricky Stenhouse for his wreckfest at Daytona and Austin Dillon for wrecking Aric Amirola to win. Hmmm?