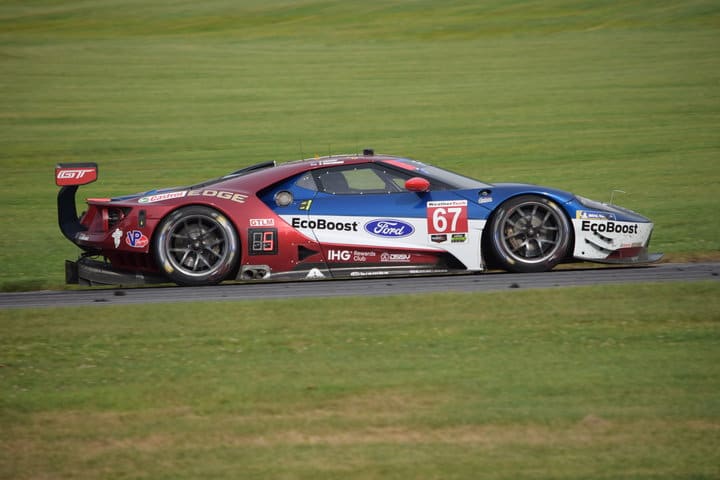 Qualifying for Sunday’s Michelin GT Challenge at VIR was held in changeable conditions.  Ford Chip Ganassi Racing IMSA’s Richard Westbrook was fastest during the GT Le Mans session in the wet with a lap at 101.852 mph.  Despite being 11 seconds slower than the GT Daytona pole time, he will start on the pole for Sunday’s sprint race.

“It was great fun,” Westbrook said after the session.  “We left [the pits] a bit late.  But we just thought there was no need to panic.  There was a lot of chit-chat on the radio sort of the first five minutes just sitting there.  I wanted to go out on slicks, but they were persuading me that it’s not going to dry out.  I think it was [dry] in the end.  It was probably enough to go for it on slicks, but it didn’t matter.  We went out on wets and the tires were good at the end because we hadn’t been pounding round and round.  I think we got it just right.  I love the wet.  It’s my first time around here in the wet.  It’s a lot of fun.  It’s pretty tricky because there are so many different sealants on the tarmac so you’ve got grip and then you don’t have grip.  So it’s difficult to judge but thoroughly enjoyable.  This stage in the season, I’m going to say this is an important pole.”

In the final couple of minutes of the GT Daytona qualifying session, it began to rain on only a portion of the 3.27-mile road course.  The rain only lasted for about 15 minutes and stopped right at the beginning of the session.  The sun also came back out, leaving teams with a decision to make.  Go out immediately and try to set a decent time, or wait and hope to be able to run on slicks.

Ultimately, Westbrook and Corvette Racing’s Tommy Milner chose to wait while everyone else went out when the pit lane exit opened.  With the wet conditions, there were a number of mishaps.  John Edwards slid off at Turn 4 and hit the tires in his BMW.  Teammate Connor De Phillippi also slid off-course, along with Porsche GT Team’s Earl Bamber.

As the track dried, the lap times continued to drop.  Despite their off-course excursions, both of the BMWs were in the hunt.  With two minutes remaining in the session, Westbrook set his quick time to top the charts.  No one could catch Westbrook from there.

Westbrook’s lap was nearly six-tenths of a second faster than Porsche GT Team’s Patrick Pilet, who put himself on the front row at the last minute.  Despite hitting the wall early in the session, Edwards still managed to qualify third, followed by Corvette Racing’s Antonio Garcia.  De Phillippi will start fifth.

Pilet’s teammate Earl Bamber was on pace to put himself right up front on his final lap.  Unfortunately, he performed multiple pirouettes exiting the final corner.  As a result, he will start eighth.

For the GT Daytona teams, their qualifying session started completely dry.  Everyone ran out on track as soon as they could due to the fact that the tires at VIR take quite a while to get up to temperature, upwards of 20 miles at speed.

Once up to speed, it was points leader Madison Snow who set the time to beat.  That was challenged by Riley Motorsports’ Jeroen Bleekemolen.  However, it was 3GT Racing’s Jack Hawksworth, who actually waited a couple of extra minutes to start his session after everyone else, who was fastest with a lap at 113.076 mph to win his third pole of the year.

Hawksworth’s lap was two-tenths of a second faster than Bleekemolen’s Mercedes, followed by Bill Auberlen in the Turner Motorsport BMW M6 GT3.  Kyle Marcelli in the second 3GT Racing Lexus will start fourth in class, while Snow will start fifth.

Wright Motorsports’ Patrick Long had won the last two class poles coming into VIR and looked like he could challenge once again.  Long ended up spinning out in the Oak Tree turn on what would have been his best lap of the session.  The rains that arrived in the final five minutes of the session prevented him from improving his time.  As a result, Long will start sixth in class.

The Michelin GT Challenge at VIR is scheduled to go green slightly after 1 p.m. EDT Sunday afternoon.  Coverage will start at 1 p.m. on FOX Sports 1, then move to FOX Sports 2 at 2 p.m.