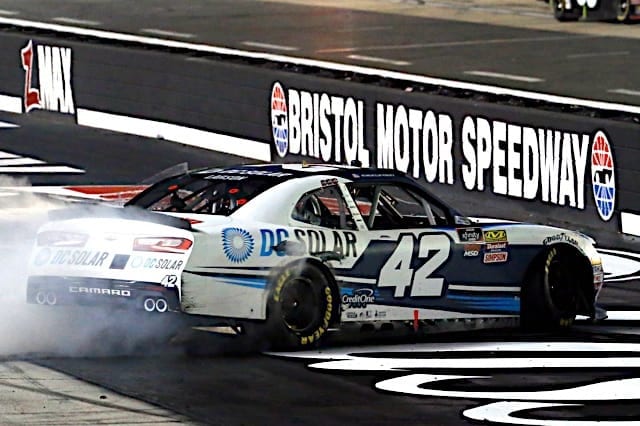 Kyle Larson had been oh so close to finding Victory Lane at Bristol Motor Speedway. In Friday’s (Aug. 17) Food City 300, he finally got it done.

In 18 combined starts at Bristol between the Cup and XFINITY series, Larson had led over 1,000 laps, though he didn’t have a win. Meanwhile, leading 202 laps on Friday, the driver of No. 42 had the dominant car following a Kyle Busch incident in stage one.

“I haven’t started looking for a broom,” Larson said. “I always know how tough these things are to win. I’m just thankful for the opportunity.”

In six XFINITY starts this season, Larson has four victories and 525 laps led. He ties Christopher Bell for the most wins this season, though he’s made 16 fewer starts.

I love me some badass short track racing, and that’s exactly what the XFINITY Series delivered.

Sure, Busch jumped out to a six-second lead in stage one, lapping three-quarters of the field, but there was a battle between lapped traffic that lasted for upward of 30 laps with Larson and Bell.

Larson used the chrome horn on a couple occasions to the No. 20 car, but Bell hung on. It was two of the best dirt drivers in the world competing at a track that is famous for dirt drivers getting it done. And once Busch wrecked out, that battle was for the win.

Larson works his way past lap traffic and Christopher Bell to take the lead with less than 95 laps to go on @NBCSN! pic.twitter.com/qYl67CLtHA

Over the past few years, Larson and Ricky Stenhouse Jr. have had solid runs in the Cup races at Bristol, but it looks like Bell will be the next guy to have his say at who is good at the Last Great Colosseum.

Ironically enough, it was the first time the duo have battled for a win, and both drivers loved the hell out of it.

“I was smiling inside my helmet so big,” Bell said after the race. “This is the first time I’ve gotten to run the real Bristol where the top rubbers in and you get going around there pretty good. That was the most fun I’ve had in a stock car.”

Larson, who edged out Bell for the win had similar thoughts.

“I felt like I could anticipate his moves a little because I feel like we’re the same driver,” Larson said. “I knew what I would do, and that’s probably what he was going to do behind me… Any time Bell and I race each other, we’re battling for the win. It doesn’t matter if it’s a Legends car, a Midget or an XFINITY car. It’s nice to beat him.”

Busch looked to be on his way to lapping the field at Bristol, but on lap 71 that went away.

A few laps prior Busch got into the wall in Turn 2. But it was an incident that Busch got out of the racing groove that sent him sliding into the outside wall.

“Just rubber on top of rubber,” Busch said in disappointment. “The rubber build up that was happening – I just got into the corner a little too hot and just got up into the fence a little bit and then I don’t know, two or three laps later it blew out.”

Busch won the pole for the event and led 69 laps. It’s his worst finish at Thunder Valley since a 42nd-place result in 2008, competing for Braun Motorsports.

Bristol was Busch’s last scheduled XFINITY start of the season. In seven starts, the No. 18 car led 405 laps and scored a single win at Pocono Raceway. It’s the first time the 2009 series champion won just one race in an XFINITY season since 2012 when he didn’t win at all.

At the beginning of the season, Roush Fenway Racing implemented the No. 60 car, which has three separate drivers running on a weekly basis, but that plan hasn’t worked out too well.

Chase Briscoe was behind the wheel of the No. 60 Ford on Friday, and started the race in 13th. At the end of stage one, the rookie driver had fallen to 17th. But stage two was a disaster, as Briscoe got loose off Turn 4 and nudged into the inside wall.

A tough break for Chase Briscoe at Bristol.

It doesn't take much to wreck at @BMSUpdates. We're nearing halfway at @BMSUpdates! Join us on @NBCSN or stream here: https://t.co/vBhAIip72S pic.twitter.com/5XpolwiOU3

“I just got racing with the [No.] 4 really hard.  I’m all for hard racing, but it’s just frustrating when he lets four guys in a row go,” Briscoe said. “We were faster than him and just kept hitting on him and hitting on him.  He flipped me off a couple of times and then I just kept trying to pass him on the inside.

“I hate it for all the 60 guys. They’ve had to work on a lot of racecars this year. I felt like we had decent speed tonight and maybe could have contended for a top-10, but the day got cut short.”

This was the 17th time the No. 60 car has either wrecked or spun through the opening 22 races of the season. It now sits 21st in the owner’s championship, behind the underfunded teams of Ryan Sieg Racing, Jeremy Clements Racing and DGM Racing.

It took 22 races but Michael Annett finally got a top-10 finish for JR Motorsports.

The day didn’t start off well for Annett, though, as the No. 5 car spun in the second round of qualifying. The team had to replace the splitter, meaning he had to start in the rear.

At the end of the first stage, Annett raced to 17th. In the second stage, the No. 5 team earned two stage points by finishing ninth. But it was the third stage where Annett shined, though he believes his finish was based on luck.

After getting a good restart on an overtime finish, Annett jumped up to seventh, where he would pick up his first top-10 result since Homestead in November.

The #XfinitySeries playoffs bubble tightens a bit as @MichaelAnnett grabs his season-best finish in 7th. pic.twitter.com/JezZBZysgf

“Everything just fell our way,” Annett said after the race. “My new crew chief Travis Mack called an awesome race. My spotter was really aggressive, but that’s just the way we’re going to be the rest of the season. We have to be in order to get as many points as possible. You don’t like to wish bad luck on anybody but we’re going to need some.”

With four races remaining in the regular season, Annett sits 13th on the playoff grid, 42 markers behind Ross Chastain for the final playoff spot. He believes this could be the shot in the arm the team needed to get on a role.

“I wish we had some ovals from here on out, but we finished second at Road America last year,” he said. “We need to get through that and then we have some ovals coming up and get ourselves into this.”

With the spring race being a Dash 4 Cash event and no Cup drivers were allowed to compete, the heavy hitters came out for the Food City 300.

Larson led the aforementioned 202 laps, while Busch had lapped up to 11th position, prior to getting into the wall on lap 71. The No. 18 car ended the night in 36th.

Joey Logano ran around the top five throughout the race, but never made it inside the top three. The No. 22 car finished fifth. Meanwhile, Chase Elliott, who was running as high as second with less than 10 laps to go but had a tire problem, faded to ninth.

Chastain finished 12th, Ty Dillon got into the wall and cut down a tire before crossing the finish line in 15th. Timmy Hill finished behind the wall in 33rd, as did JJ Yeley in 40th.

“The guy in second definitely has an advantage coming through traffic, especially whenever you get the traffic side-by-side.” – Christopher Bell

“We definitely got used up on restarts for no reason.  I don’t know why everybody wanted to put us in the wall today, but we had a solid car.” – Cole Custer

Overall, this was one of the better short tracks in the XFINITY Series in quite some time.

There was racing, bumping, beating, slide jobs; everything you could ask for in a good ole short track event. Larson and Bell put on a clinic, weaving in-and-out of lapped traffic.

The series heads to Road America next Saturday (Aug. 25), where Jeremy Clements is the defending winner. That race clinched the No. 51 team a spot into the playoffs and could be the final wild-card before the playoff field is set at Las Vegas Motor Speedway in early September.