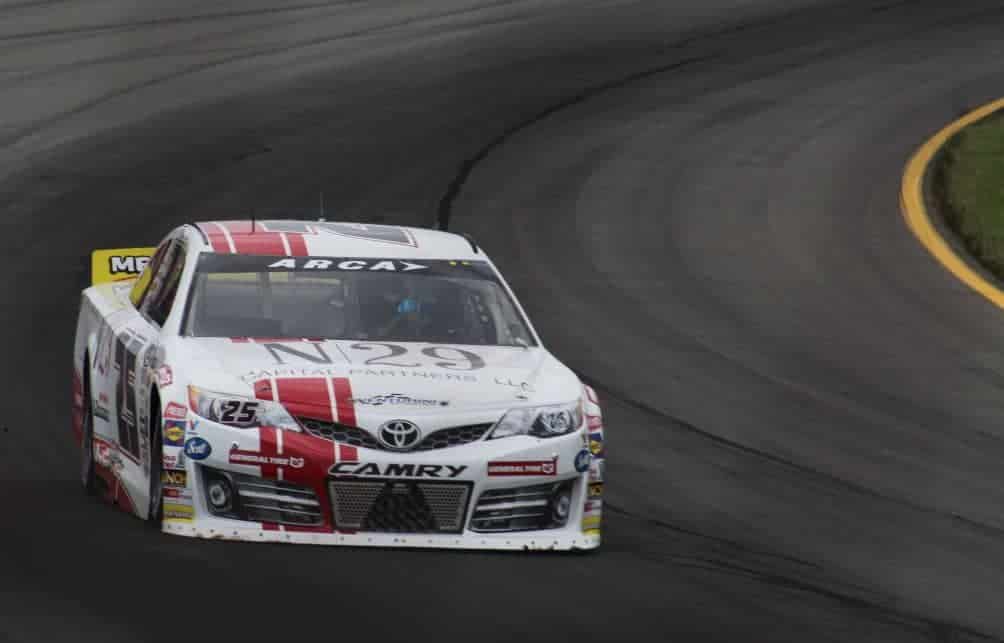 Just like at Salem, Christian Eckes was a contender, but not the dominant car for much of the day. Just like Salem, Eckes got better and better on restarts as the race went on. And just like Salem, Eckes was able to hold off the dominant car from the final restart on, this time keeping Sheldon Creed (and teammate Logan Seavey) at bay long enough to win in overtime at the Illinois State Fairgrounds, scoring his second win of the ARCA season. Creed, Seavey, Travis Braden and local favorite Ryan Unzicker rounded out the top 5.

While Eckes deservedly took the trophy Sunday afternoon in chamber of commerce weather conditions, it was points leader Creed who may remember this day longer. Creed won practice and led large portions of Sunday’s race after driving 11 hours in a rental car from Dallas to be in Springfield after weather conditions canceled his flight on Saturday. More importantly, Creed’s strong run also came as teammate Zane Smith saw a strong run go up in smoke when his engine overheated around lap 44. Though the No. 41 team made multiple stops and even got a free pass in dealing with the overheated engine, Smith parked for good around lap 60, finishing 17th and watching any title hopes he had disappear in a cloud of dust.

Creed leaves Springfield with a seemingly insurmountable points lead heading (back) to the Berlin Raceway for a rescheduled event. Last year’s winning crew chief Kelly Kovski returned to ARCA competition for the first time since 2016 and finished eighth, with 2008 ARCA champion Justin Allgaier supporting him from the track.

Leave it to Venturini Motorsports to demonstrate a total team effort in as ARCA a venue as possible in Springfield. Eckes, as described above, drove a masterful race and was able to pull away when it counted in overtime to close another race win. Debutant Seavey, making his first ARCA start showed every bit of his dirt racing talent on Sunday, proving to be a fixture in the top 5. And then there’s Natalie Decker. Just like Creed, Decker also had travel issues getting to Springfield…so much so that she missed all of practice and took her first dirt laps in an ARCA car during qualifying. It showed, as Decker was outqualified by a number of backmarker cars. However, once the green flag dropped Decker moved steadily through the field, and scored a top 10 finish on the lead lap despite losing low gears for the final two race restarts. Crew chief Frank Kimmel was exceedingly complimentary of his driver, and rightfully so. In a year where MDM has dominated, the old veteran team took the spotlight today.

That’s not to take away anything from Sheldon Creed, who seems to have clinched the ARCA title every way but mathematically after his runner-up effort. What made it even more impressive is that Creed’s team was alarmed after the first tire change of the afternoon, which saw chunking on his tires. The No. 28 team was so freaked that they were planning how to get their driver out front…so he could slow down the pace of the race (the second groove never really came in today at Springfield). Be it better tire performance or excellent driver maintenance, the No. 28 team was a factor all afternoon and continue to impress.

Travis Braden equalled his best finish of 2018 with a fourth place run, and he did so despite struggling on restarts all afternoon.

Out of all the dirt ringers that ran, top honors went to Ryan Unzicker (who also became one of only a handful of drivers to earn a louder ovation than Natalie Decker at an ARCA race in 2018), who scored a top 5 driving for the Hendren Motorsports’ team that placed an ARCA entry for the 44th year.

And speaking of longtimers, hats off to Joe Cooksey and Hixson Motorsports for an 11th place finish. Always good to see a Hixson car back out there.

When Chase Purdy suffers mechanical failures, they’re always spectacular. Echoing his massive engine failure at Elko last month, Purdy’s car erupted in smoke and flame again around lap 25, all while Purdy was running in the second position. The track PA announcer indicated that the wrecker team had a hard time towing the charred remains of the car away from the racing surface…here’s hoping that wasn’t a result of heat.

After starting in the rear due to an unapproved adjustment, Riley Herbst also got up to second in the running order late in the race. His disaster struck in the pits around lap 60, when issues with a lug gun dropped Herbst to outside the top 10 for the ensuing restart. A spin on lap 83 took away any chances of a top 5 from the No. 18, which settled for a ninth place finish.

Zane Smith’s Sunday was a microcosm of the season for the No. 41 team; a dominant start and losing steam towards the finish. Smith led the first dozen or so laps and was never far from the top 5 until around lap 44, when the driver reported his water temperature gauge had pegged and his engine was losing power. Coasting around the cushion until he could get to pit road, Smith never seriously raced again until parking the car for good around lap 60.

The MavTV broadcast didn’t catch it, and I was looking as turn 1 instead of turn 4 when it happened, but the end result was this around lap 88; Joe Graf Jr., coming to pit road after reporting he was having an electrical issue, ran smack into some of the barrels/trash cans at pit road entry, and destroyed the front end of the No. 77 doing so. Graf left the race car blocking pit road entry, and ARC towed the wreck away while leaving the race under green flag conditions…more on that later.

Former ARCA PR man Don Radebaugh literally told me 20+ times during my time covering the ARCA ranks back in 2010 that I had to make it out for an ARCA dirt race. Sunday marked the first time I’ve done so, and they’re definitely something special. It’s a cool feeling to see stock car racing as the feature of a state fair, and it’s always fun to see these heavy stock cars take to dirt tracks. Having said that, if you’re going to run dirt, it’s worth looking to actual dirt racing for some pointers. Today, 800+ miles from home, I thought of my hometown dirt track in Winchester, VA for two reasons. First, in the case of Bryan Dauzat, being involved in five yellow flags is too much. At Winchester, two yellows in a heat, you’re parked. Three yellows in a feature, you’re parked. Sunday’s race would have benefited from such a rule.

Second, the late-race episode where the race stayed green even though pit road entry was obstructed by a wrecked car. I understand the intent to keep the race under green, especially late in the going, and I also understand that the chances of a pit stop being made inside of 10 to go were infinitesimal. But, you’re either committed to live pit stops, or you’re not. And if you’re doing live pit stops, pit road has to be clear. ARCA deserves a lot of props for being far more hands off with officiating races than their new overlords at NASCAR, but this was just too laissez-faire. Where does my hometown dirt track fit into this? It’s a 100-lap dirt race…don’t count caution laps. The way the beer was flowing in the grandstands on Sunday, I doubt too many fans would have minded.

The ARCA Racing Series heads back to Berlin Raceway to run the Primera Plastics 200, which was rained out last month. If you’re interested in watching it, better make the trip to Michigan, because MavTV will not have the rescheduled event televised.