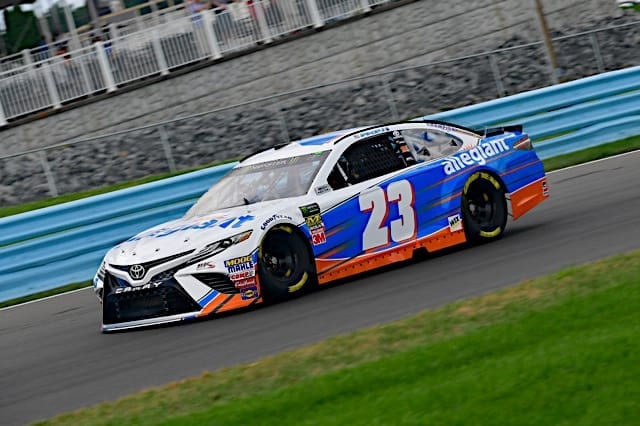 After seven years running the Monster Energy NASCAR Cup Series, BK Racing will be sold by team trustee Matt Smith on Tuesday (Aug. 21). But what does that mean for the team’s longtime employees?

It’s been a rough year for this underfunded program, which from its inception in 2012 has seen many of the lows of NASCAR. Much of 2018 has been played out in court as former team owner Ron Devine filed for Chapter 11 bankruptcy on Feb. 15. Smith was appointed to oversee the team on March 28, removing Devine from the position. The trustee then decided selling would be the best option.

Bids were due on Aug. 13 and Devine claims he made one despite the circumstances. Both Mike Beam of GMS Racing and Bob Jenkins of Front Row Motorsports are also in the running. The initial bid from GMS Racing was for $1.8 million on July 26, but that’s solely for the charter. Whomever buys the team must also pay several hundred thousand in various unpaid fees to vendors, employees and NASCAR.

However, what happens to BK Racing’s employees is yet to be determined. Battling through bankruptcy for the entirety of the 2018 season, the team sits 34th in the owner’s standings. They’re ahead of just two other charter programs, Starcom Racing and Rick Ware Racing. Gray Gaulding drove the No. 23 Toyota in the first 17 races but since then, it’s been a mishmash of drivers. J.J. Yeley earned their best finish, an 18th at Daytona last month, as an uncertain future creeps ever closer.

“We’re flattered by all the interest in the race team,” Ryan DuBois, General Manager of BK Racing told Frontstretch. “Certainly, some of the drivers we’ve put in the seat is to give them an opportunity and the team an opportunity for competition, but also financial support for us to keep going.

“I’m confident that Matt [Smith] has been putting all the effort he can in retaining the team and sell the team as a team and not just show that there’s just a value in the charter, that there’s an actual value in the people that have kept the team alive and kept it operating to this point and showing ‘here’s a group of guys that have been bankrupt, but look what they’re doing through bankruptcy. Give them a little bit of support and the sky is the limit.’”

DuBois has been happy with the inner-team transparency from Smith since he took over. He truly believes all the employees that are at BK Racing will be there past Aug. 21.

DuBois also mentioned that Smith, the trustee, is at the shop “nearly every day of the week.” If he’s not there, “he’s in constant communication” with the team, ensuring they stay together in the wake of off-track chaos.

Since Devine purchased BK Racing in 2012, the team has had 27 different drivers. The instability caused crew members to be in and out just as much. There are anywhere between 17 and 20 full-time employees on the team currently; some are brand new, hired as recently as Kentucky Speedway in July.

But a few of those remaining have been there long-term. Jose Grimaldo, rear tire changer, has been with the team since the beginning of the 2014 season. He doesn’t want 2018 to be his last year at BK Racing.

“I’m concerned. I hope I can still have a job,” Grimaldo said of the Aug. 21 ruling. “I like being here, but things happen. For me, I’m grateful because I used to do landscaping and this is 10 times better than landscaping. I’m grateful that at least I have a job, for now.”

There are other team members who haven’t been a part of the team as long but are still concerned about their job statuses.

“The plan is to stick with the team through the end of the season and kind of see where the ownership change takes us,” Cody McCray, front tire changer, said. “You always worry a little bit. There’s always change and turnover in this business so new owners usually bring change.”

Even the truck drivers are up in the air on what their future holds. They want to remain with BK Racing but realize the sale is out of their control.

“They can always bring in their own truck drivers,” Brian Bingham said. “It’s questionable on whether or not we have a job afterward. But I’d rather the team be more efficient in the long run.”

A potential buyer for the team remains up in the air heading into Tuesday. There are at least three bidders on the record, according to one source, though up to 29 people have approached Smith expressing interest.

No matter what, come Tuesday, BK Racing will have a new future. It will be out of the hands of the team’s employees who are simply along for the ride.

“My guys know how to race,” DuBois said. “The racing part of it is comforting to everybody because all of us are new to the bankruptcy stuff. Navigating through it is difficult for us. The trustee has given the guys confidence that we can get through it and come out on the other side with a better outcome and better days to come in the future.”