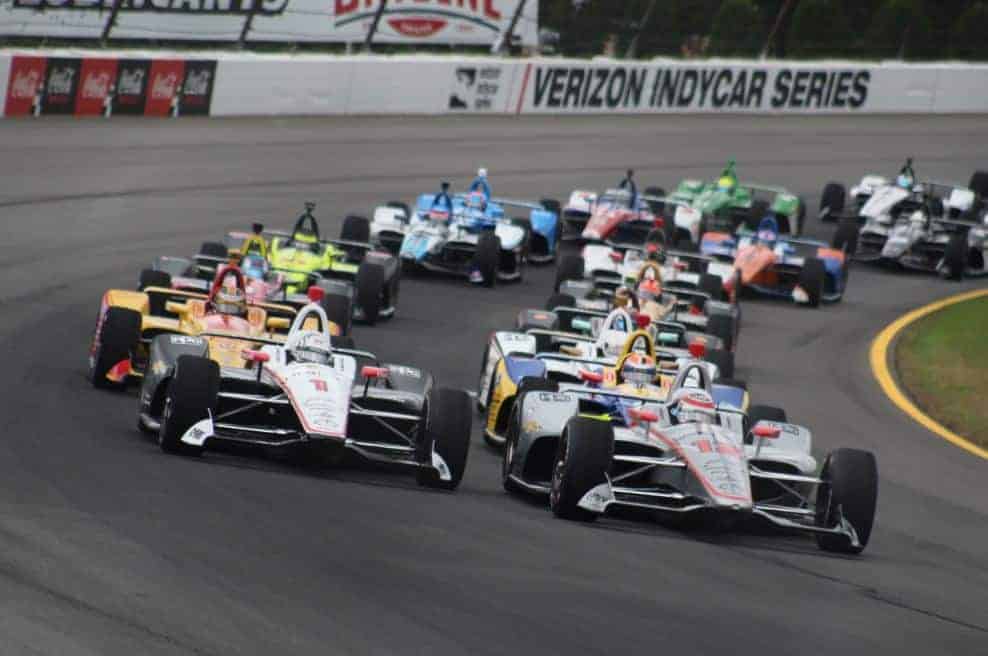 Before the green flag, Alexander Rossi admitted that he’s still “terrified” of oval racing, but he ended up the winner of the ABC Supply 500 at Pocono Raceway on Sunday.

Rossi, who started third, led 180 of 200 laps at the “Tricky Triangle.” It was his fifth career IndyCar win and his first on a speedway since winning the 2016 Indy 500.

Rossi has now won two consecutive races. He was the winner at Mid-Ohio three weeks ago and has cut his deficit behind championship leader Dixon down from 46 points to 29.

When the race restarted after the first caution involving Graham Rahal and Spencer Pigot, the field didn’t make it through Turn 2 before another yellow flag waved.

Robert Wickens and Ryan Hunter-Reay made contact in the middle of the tunnel turn, leading to a vicious, airborne wreck for Wickens. Hunter-Reay and Takuma Sato’s days ended, and they were released from the infield care center rather quickly.

James Hinchcliffe and Pietro Fittipaldi were also involved. Both drivers were cleared to drive after Hunter-Reay and Sato were given the OK, although Fittipaldi said he’ll likely feel sore from the crash. Earlier this year, he broke both legs at Spa Francorchamps in a sports car event and had missed a majority of the IndyCar season.

Wickens was the focal point of concern, though. His No. 6 Honda went flying into the catch fence, and he was taken to Lehigh Valley Hospital in Allentown, Pennsylvania, where he was treated for orthopedic injuries. The red flag was displayed for an hour and 56 minutes to tend to the Schmidt Peterson Motorsports rookie and repair the obliterated fence.

Now, the question will be: how soon should IndyCar consider additional protection for the drivers? Formula One introduced the halo this year, and Dixon tested a windscreen at Phoenix earlier this year, but when will the windscreen make its IndyCar debut? After Wickens’ crash, that debate should be prevalent over the next few months.

IndyCar’s universal aero package was introduced this season with high expectations, but the speedway races have not lived up to the hype. The Phoenix Grand Prix was a 170-mph parade salvaged by a dramatic ending with Newgarden pitting under yellow and passing Wickens, who stayed out on old tires, for the win.

Then, the Indy 500 happened, and drivers once again struggled to overtake. Power said on Saturday that the 500 produced difficult overtaking situations because of the intense heat the track surface had on the day of the race. But Sunday’s Pocono race was run with cloudy skies in the 70s, so he couldn’t place the blame on the weather conditions again.

“It’s less downforce to start with,” Power said. “We haven’t had enough time to understand the tire because Scott and I did a test at Indy, and the tire makes a huge difference. This car has a different weight distribution … we could make the tire work a lot better as well.”

Rossi was dominant when he led, but if he got stuck behind a lapped car, he couldn’t overtake it as quickly as he liked either. Midway through the event, he got caught behind Matheus Leist, and his lead over Power went from over nine seconds to less than five.

“I think the fact that we didn’t have a [Final] practice yesterday when we’d focus on race-running, put everyone on the backfoot,” Rossi said. “We all went into the race guessing on the setup based on what we had done in qualifying, which is really hard to do. Usually, you have a pretty big shift in the car setup … especially on these superspeedways. … I think that’s really the main reason.”

IndyCar is arguably the most competitive form of professional open-wheel racing. Every driver in the paddock will say it. But it’s hard to claim that when overtaking comes at a premium. The last few years have seen exciting oval races because drivers could dive into the corners and be more aggressive. This universal aero kit doesn’t seem to permit the same aggression. Like the windscreen, this will likely be a popular discussion going into the offseason.

“You can pick its pieces, but I think we had a pretty successful test at Indianapolis,” Dixon said. “We had some aero changed and some ideas to move forward. The tire was a big thing, the front wing plates, and the underwing as well, so I definitely think there are some things in the works. … Ultimately, it just makes it really hard to pass.”

Rossi is catching up

Dixon now has 530 points while Rossi owns 501. Catching a four-time champion isn’t an easy task, but Rossi knows it can be done. Three races remain, including the double-points finale at Sonoma Raceway.

“We’re trying,” Rossi said. “We had a stretch where the pace was there; we just weren’t executing on Sundays. … It’s going to be no easy feat.

“It’s a long way to go still, and Scott doesn’t finish bad ever. … It’s a stretch of three weeks and three races, so the next two weeks are very important for the entire year as a whole.”