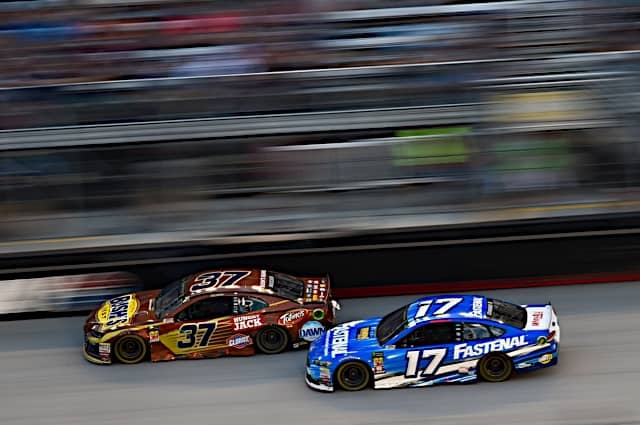 When you race at Bristol Motor Speedway, whether in Monster Energy Cup, XFINITY or Camping World Trucks, you learn quick how easily that place can take the best out of you. It can make you do things you wish you didn’t and can define or destroy weeks of momentum as the regular season turns its final corners.

Despite the annual chaos of the half-mile track, it actually lends opportunity for small teams. Rather than the downforce-heavy 1.5-milers that crave long green-flag runs and slick setups, Bristol takes these necessities and expectations off the table.

Instead, Saturday’s (Aug. 18) Bass Pro Shops/NRA Night Race offered the underdogs of the Cup Series a chance to “race” their way toward the top 15 and beyond. All you had to do was stay cool, pick your lanes and keep calm… you know, those old chestnuts.

But that was as easy as it may sound sitting on the recliner. A quarter of the field failed to finish with a handful of them (all underdogs, by the way) dropping out on the first-lap Big One. This, however, set the stage for a rather uplifting night for a few small teams. But that doesn’t mean it was the end of all trouble for the night.

This week’s Frontstretch “Underdog of the Race” didn’t emerge to the spot until the final restart with 13 laps to go when Chris Buescher lost ground with a flat tire while running in the top five.

Due to the contact that spun Kyle Busch, it was Kasey Kahne who rose to the top spot, earning the free pass and finishing 15th for Leavine Family Racing. The run was his fourth “Underdog of the Race” in 2018 and came during a special time in his career and in his life.

Kahne announced his retirement from the Monster Energy NASCAR Cup Series on August 16, making 2018 his final full-time season on the circuit. It came soon after Elliott Sadler‘s retirement announcement this past week, putting the longevity of drivers’ careers back into question.

So, in good time, Kahne put up his best Bristol run since 2016 when he jumped to 15th. Top 15s have been rare for LFR in 2018, as Saturday was just his second through 24 races. The poor performance has put Kahne just 27th in points, and unfortunately, with nearly no chance on fighting for a championship to cap off his Cup career.

But with expectations where they are, 15th-place finishes are wins for LFR and Bristol can give them a short-track sized boost heading into the playoffs despite no title run.

David Ragan and Front Row Motorsports have been among the best underdog combinations of 2018 and were second in line behind Kahne on Saturday night. The No. 38 Ford qualified 15th, tying his best non-plate starting spot since the fall of 2016, and came home 17th at the checkereds.

Additionally, adversity was in order for Ragan, who spun during the race on lap 199.

Runs like Saturday have been somewhat expected at this point. More than any other season, Front Row has shown a stiff step forward, showing that valuable top-15 potential.

Chris Buescher raced and won for Front Row in 2016 and was also in the top half of the field at Bristol. But unlike Ragan, the No. 37 JTG Daugherty Racing Chevrolet was in the top five in the closing laps.

Following a turn of pit strategy under caution, Buescher restarted fourth with 22 laps to go. And after running top 10 on pace mid-race, the night could have ended there… until Bristol’s three lanes put Buescher in the middle with Jimmie Johnson and Kyle Busch.

Here, Buescher was squeezed not once, not twice but three times by Johnson, who came up into the No. 37 from the bottom lane in the laps following the restart. The final hit cut the left-front tire for Buescher, also causing a crash a lap later by Busch, who ran the high lane at the time of the contact.

A steady run came to a close for Buescher, who ended the night 19th, one lap down after what he called “ridiculous” contact.

“We’re up there racing with guys who we’re normally not and they don’t like it,” Buescher said in frustration following 500 laps. “Got sandwiched three laps in a row… can’t lift at the end, you got to go.

“We were here. I can’t wait for the next Bristol. I’m glad we ran well.”

One more underdog who ran well Saturday was Ty Dillon. This guy was a week removed from a bizarre wreck at Michigan and came back to finish 21st at Bristol. The run may not have jumped off the page but it tied his best non-plate finish since Richmond way back in April.

Considering Matt DiBenedetto finished the race four laps down, perhaps a 22nd-place run was satisfactory in the end. With four green-flag runs of more than 50 laps, it was a little tricky to keep up with the roundtable of race leaders.

DiBenedetto and Go Fas Racing earned their best run since Daytona in July and beat out a couple bigger teams in Hendrick Motorsports and Roush Fenway Racing.

Landon Cassill came home 25th for StarCom Racing. The veteran returned to the track he placed top 20 in the spring and brought home a clean car in his 17th start with the team.

Ross Chastain was a spot behind in 26th. The rookie ran triple duty at Bristol, running both XFINITY and Trucks before Saturday night.

Timmy Hill was 28th while JJ Yeley was 32nd. Unlike Hill’s night, Yeley’s did not include a quiet end, as he was nailed in the left rear when Martin Truex Jr. crashed into Turn 1. The contact was hard enough to sheer the left-rear tire off his No. 7 Chevrolet and slide to a stop in a wake of sparks.

Reed Sorenson ran his first race for Rick Ware Racing, finishing 33rd. The race was his first outside of Premium Motorsports in more than three laps, last competing with Front Row Motorsports at Richmond in 2015.

Corey Lajoie suffered another mechanical issue, this time electrical, toward his seventh DNF in 14 starts this year. Cole Whitt, however, has only one DNF in 10 starts in the No. 72 TriStar Motorsports Chevrolet.

Jesse Little ran his second-ever Cup start and first for the Gaunt Brothers on Saturday. Unfortunately for the Truck Series talent, the early Big One swallowed up his No. 96 Toyota, which continued for 59 laps before calling it a day in 35th spot.

Michael McDowell once again had early trouble at Bristol, finishing 37th after that crash. Fun fact: McDowell ran just 19 of 1,000 laps at Bristol across both races this year. His laps-ran count at season’s end will likely be the least of his full-time career.

Darrell Wallace Jr. crashed out on Lap 2 and was particularly heartbroken after leading the previous Bristol race in the spring. AJ Allmendinger has been the underdog of the year thus far and was also taken out on the first lap along with Gray Gaulding.

The triple-header weekend started with the Truck Series on Thursday night, a primetime slot that gathered more than 1 million viewers for the series’ visit to Bristol.

The UNOH 200 saw Stewart Friesen once again rise to the top, losing out on a battle for second that quickly turned into the battle for the win when leader John Hunter Nemechek dropped out in the closing laps. The No. 52 came home with another second place.

Parker Kligerman shined under the lights, bringing his Henderson Motorsports Chevrolet to a fourth-place finish. The result was his first top five of the year and best finish since his Talladega victory last fall. Certainly, the underdog story of the weekend across all three series.

The XFINITY Series put on a show Friday night for their Food City 300 and it was GMS Racing and Chase Elliott who fell from the top five to finish eighth in the overtime race.

Ryan Sieg just missed out on a return to the top 10 for his family-owned organization, finishing 11th. Still, the result (their best non-plate finish of the year) was a positive for the No. 39, who will likely not make the playoffs in 2018.

A side note… did anyone get the license plate on the car that hit me?#thatf*ckercameouttaNoWhere#ouchy pic.twitter.com/WSzqTV8Ywe

Had one of the better races of the year. Raced some good cars all night and brought home the @CooksCSystems car in 11th! Great night for team 39. pic.twitter.com/pFYm6vKByj

So sad @TayDiBenedetto wasn’t home to watch us catch this little guy ? behind our garage fridge. We thought about putting him in a box and surprising her when she gets home but I don’t want to be dead or divorced ? pic.twitter.com/nNHsLf8JVb