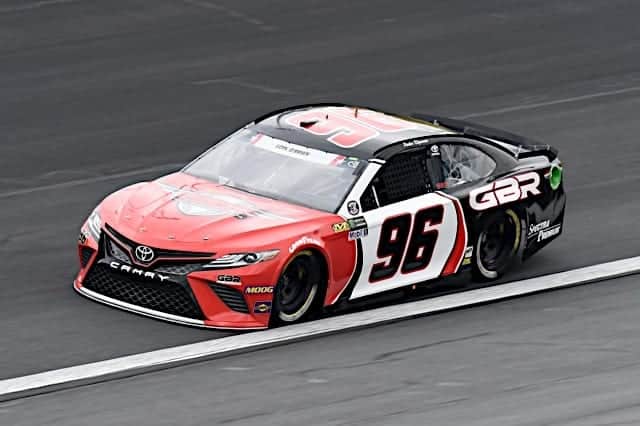 For the past decade, Parker Kligerman has been on the stock car radar, including a nine-win ARCA season in 2009. Since then, he’s seen it all.

Kligerman, 28, competed full-time in the Camping World Truck Series in 2011 and 2012, recording a victory at Talladega Superspeedway with Red Horse Racing. In 2013, he ran ninth in the XFINITY Series championship standings with Kyle Busch Motorsports, finishing a career-best third at Road America.

Toward the end of 2013, Kligerman made his Monster Energy NASCAR Cup Series debut with Swan Racing, finishing 18th at Texas Motor Speedway. The plan was to run a full season in 2014 with the same team, though that came to a halt eight races in.

Since 2014, Kligerman has made three Cup Series starts, all coming this season with Gaunt Brothers Racing. In a recent interview with Frontstretch, the Connecticut native discusses some of the ups and downs of his career, how he got the opportunity to compete at the Cup level in 2018 and much more.

Dustin Albino, Frontstretch: This year you have a trio of Cup starts. How challenging is it to be competitive not being in the car on a weekly basis?

Parker Kligerman: There is stuff that’s hard, I won’t lie. Like at this level in Cup, man, Cup is hard. If you look at the separation from 20th to 30th and it’s like three or four tenths and when you start to break that down and look at the lap, you think you can gain a fraction here, or a fraction there. When you add that up, it’s fractions of differences and then at the same time, you’re working on yourself and your car.

For me, the hardest thing is I just don’t get to drive these cars much. It’s hard for me to help this team get better, get better myself and get better all at the same time. It’s a tall task, but I enjoy it.

Albino: When you get to the track is it hard to get in a rhythm?

Kligerman: Yeah, it is hard. I think people underestimate this level. I can jump in a truck, no problem. I feel like if the truck is there, I’m P1, no problem. In an XFINITY car it depends on equipment, but at this level, you’re really asking a lot of yourself to be perfect right from when you get in the car, and you have to be. In this series, there is no giving up. I don’t care if you’re racing for 33rd or third, it’s the most competitive series on the planet.

Albino: How did you originally get paired up with the No. 96 team for Charlotte?

Kligerman: It’s actually interesting. There were a couple different areas that I was filming this new TV show that’s coming out in the fall in California, car show, it’s pretty cool and I’m pretty excited about it. I got a text and it said ‘hey, would you be interested in driving this car for some races.’ It was just the [Coca-Cola] 600 at the time. I said ‘yeah, what are you thinking?’ We started to talk to Marty [Gaunt, owner] and putting it together and asked NBC and they were cool with it. It slowly came together and the next thing I knew, I was testing at Charlotte.

Albino: With the team announcing sponsorship for the rest of the year, how good is it for the Cup Series to get another full-time team?

Kligerman: You need young guys like Marty and this race team to have success like that on the marketing side. I’m pumped for them, that’s great. It’s great for this series that something like that happened and seeing Marty, who has put a lot into this sport be rewarded with this risk he’s taking to start a team. I think that’s really cool, and I’m hoping I can be a small portion of its continued success.

Albino: What can be done to help the small teams be more competitive?

Kligerman: There are far smarter people and more influential people that know that answer. It’s going to take redevelopment of our thought process of what a business model to a race team is. I fear in coming years the old model is going to continuously become more oppressive and force teams to make drastic changes and to search in innovative ways to garner the funding they need to compete at the highest level. There will be teams that get further ahead and the gap will become larger because the model it will take in the future if things don’t change will be very few and far between successfully.

I think things have to change. What’s going to happen is one of two things. Teams like this are going to be given an opportunity to vastly increase their revenue via any other source than sponsorship, or the teams at the top are actually going to come back a little bit because the sponsorship will continue to falter.

Albino: How can a driver help elevate smaller teams?

Kligerman: I think it’s multi-faceted. A driver in a small program can elevate them by a couple positions. What I mean is in Cup, every two or three positions is a big deal. Look at what Ross Chastain does in the No. 15 car. He does a great job of keeping them in the 20s. That car, before him, was probably a 30th or worse car. Now, he finds a way to put a two in front of it, and that’s a big deal for that race team. That might be three or four positions he’s made that difference, but he’s also made that difference in his effort off the track.

I think that’s misguided for a lot of small teams because for the small teams one of the biggest differences you can do is try to increase that revenue working off the track to find that sponsorship. I think some of the hardest working drivers in the sport are probably in the back that are running a full season, constantly doing everything they can to increase the revenue of the race team.

Albino: You recently mentioned on NASCAR America being loyal to race teams was your biggest regret. Why?

Kligerman: It wasn’t even one specific team other than a specific decision I made that without exploring other options in the world. I tried it twice and not realizing the adventitious position I was in at the time. Because of that, I didn’t request or guarantee myself opportunities that I probably should have, and because of that I probably didn’t get the main opportunity I was looking for quickly enough.

I was too loyal in the fact that I left my career in the hands of others and didn’t take hold of it myself.

Albino: Why don’t you think team owners have taken a chance on you?

Kligerman: I don’t know. It was [frustrating], and it has been, but it’s one of those weird things one of the smartest people in racing that I know will say ‘it will all disappear, and you’ll never know why.’ It’s a very dark way of looking at racing, but it’s true for drivers.

I think it was a couple-fold. I don’t think I ever had the marketing machine I probably could have, especially coming out of ARCA with nine wins and no one has ever touched that. I could have had more effort on that side of generating headlines and generating buzz and people talking about me and talking to other owners and getting more involved in the sport.

I didn’t do that and at the same time, nobody knew who the hell I was because I was a first-generation driver, and I don’t have a dad who came to the race every week. I didn’t have people pounding the ground pushing my name in front of owners and that sort of thing. When I look back, that’s probably a mistake. You need to be in their face, and I think I let people not think of me too often.

Albino: How would you assess your truck season thus far with Henderson Motorsports?

Kligerman: We could have won Dover, we were so fast. The steering box punched a hole in the oil cooler. At Daytona, we were really fast, running in the top five and I dropped back because I got forced out of line by another driver. I don’t know what he was doing, but he forced me out and we got back a little further than we should, and boom. Next thing I knew, I was in a wreck.

We’ve been good, if not better [than last year]. At Kentucky, we had a fast truck. We took two tires, and I lost the radio in stage one, so I couldn’t tell them what to do to fix it. We took two tires and were super loose, and I still tried to wheel it the best I could in front of [Stewart] Friesen, who had a vastly faster truck and I held him off for a couple laps. We’ve done good things and for a vastly smaller team spending vastly less than the big teams, we punch above our weight each and every time.

Do we get down about the finishes we’ve had? To be honest, we just show up to win. If the thing breaks, so be it. As long as we’ve got winning speed, try again.

Albino: What other Cup races do you have this season?

Kligerman: Hoping to have a good run here [Watkins Glen] and see what the future holds. That’s always how it’s been for me. This will not be the first time or maybe the last time that I’ve basically been told ‘hey, this is your last race, make it count.’ That’s every time in my career, from midgets to open-wheel cars to ARCA, I got told that two or three years ago. It’s always your last race, make it count and somehow I find a way back.

Albino: How hard is it knowing the next race could be your last race?

Kligerman: I don’t think about it. I think I’ll look back when it’s all done, but when I’m here doing it, I’m just doing it. I’m just going after it.