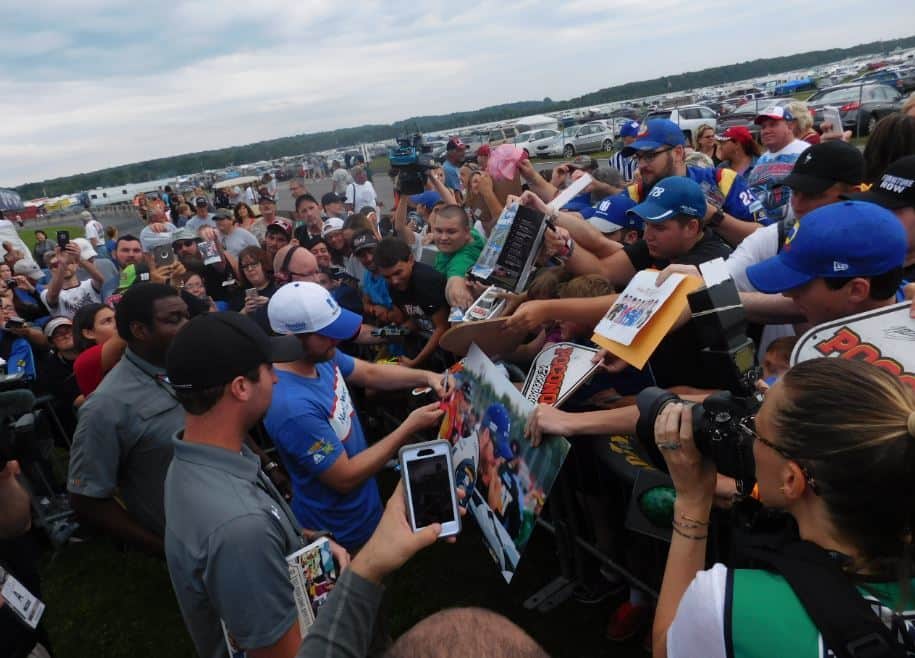 Kurt Busch‘s win at Bristol was his first in over a year and a half, but he has been consistently running well this season. Is he a realistic contender to fill in as the fourth driver to accompany the “Big Three?”

John Haverlin: Kurt Busch is a contender to join the “Big Four.” Stewart-Haas Racing has been the dominant team throughout the season. However, there have been other drivers that have made a bid for joining the elite club. SHR’s Clint Bowyer is the only “non-Big Three” driver with multiple wins. Chase Elliott has been hot lately with stage wins, the Glen victory, and just showing more overall speed in recent weeks. When it comes to the playoffs, the fight to be a Homestead contender will be difficult, but I expect Busch to be right there among the best.

Amy Henderson: I said weeks ago that Kurt Busch could surprise in the playoffs and be there come Homestead if he can find just a bit more consistency.  I wouldn’t call him a title favorite, and he’s got some stiff competition to make that top four, but he could well be a dark horse if luck is on his side.  I think without a ride announced for 2019, Busch has a little extra incentive to turn up the wick in the next couple of weeks. He’s certainly the type of driver who can go deep in the playoffs.

Mike Neff: Never say that phrase. Busch is absolutely a contender for the final four at Homestead. He’s part of Stewart Haas Racing that is still the class of the field week-in and week-out. While Clint Bowyer has two wins it is Busch who is fourth in points behind Kyle Busch, Kevin Harvick and Martin Truex Jr. Kurt Busch has victories at six of the tracks in the playoffs and is a strong road course racer. Don’t be shocked if he not only makes the finals but breaks Terry Labonte’s record for number of years between championships.

Davey Segal: I’m not sold. Honestly, I don’t think anybody besides Truex, Harvick and Kyle Busch even have a shot at hoisting the championship trophy. Sure, somebody else will be competing against them with virtually nothing to lose, but one of the big three not winning it all? One of the biggest upsets in NASCAR history. Kurt Busch is closer than he was, but Clint Bowyer has two wins in the same stable and Aric Almirola has been running just as consistent.

Following Saturday nights race at Bristol, Kyle Busch got into a verbal turned slightly physical confrontation with a fan. The fan initiated, not the driver. NASCAR is known as the most fan-friendly sport, but do fans have too much access?

Haverlin: Fans don’t have too much access, and NASCAR can’t let one dunderhead ruin it for everyone else. There’s nothing wrong with the fan-driver accessibility.

Henderson: Yes and no.  There are times at some tracks when there are so many fans in the garage or on pit road that the crews can barely get equipment to their pit stalls. If people are being hindered in doing their jobs, then yes, there are too many fans in the garage and pits. However, drivers could do a lot more for accessibility by scheduling autograph sessions during the weekends–I do think at some level there is a certain responsibility to the fans, and drivers just don’t spend the time the used to signing at the souvenir haulers.  Organized pit tours rather than a free-for-all is also a way tracks could provide access during a race weekend.  Honestly, take a look at NHRA and see what can be gleaned from that.  You couldn’t have the same model because it would not support a NASCAR-sized crowd, but there are a lot of lessons that could be learned, starting with how available drivers make themselves to fans.

Neff: LOL, Fans have so little access compared to what they used to have. One of the things that made NASCAR great was the amount of access that fans had. There is a ridiculous amount of pre-race access but the remainder of the weekend is nowhere near what it used to be. We need more access, not less.

Segal: I always pride myself when talking to friends about how fan friendly NASCAR is. But there are instances like this which sometimes make you re-think if there’s too much. Personally I don’t think there is too much. This was a case of a bad egg in the carton, so you take it out, throw it away and never allow it to come back into then carton ever again.

The NASCAR Camping World Truck Series playoff field is set for the final stretch. Who do you consider the favorite(s) to hoist the hardware in Miami?

Haverlin: Johnny Sauter and Brett Moffitt are the favorites for the championship right now. They’re the only truck regulars with multiple wins; they’ve left everyone else in the dust to this point.

Henderson: While Sauter and Moffitt are the obvious picks, I think Noah Gragson has to be in the conversation.  He’s probably got the biggest budget of the three, which means more resources coming his way.  The other name I will throw out there is Stewart Friesen…he doesn’t have a win, but he’s got that look that says if he gets one, he might get two or three in quick succession, and if he hits a hot streak at the right time, he will put himself in the conversation.

Neff: Johnny Sauter has been the man all season long and there is no reason to think he won’t be when they get to Homestead. Brett Moffitt might give him a run but the title is Sauter’s to lose.

Segal: Johnny Sauter, Brett Moffitt and Noah Gragson are the top three drivers in my mind. Sauter has the odds in his favor, Moffitt has no fear and has proved he can win when he needs to and Gragson, well, as long as he doesn’t puke, is right there too. But give me that veteran in the No. 21.

This weekend marks the third and final off weekend in the Monster Energy NASCAR Cup Series season. Do we need more off weekends, less, or keep the amount as is?

Haverlin: The number of off weekends the NASCAR Cup Series has throughout the year is fine the way it is. If anything, one additional off weekend in the summer might be nice. But I don’t think there’s anything wrong with the way it is. Don’t fix it if it’s not broken.

Henderson: I don’t know if we need more off-weekends but we do need fewer races.  I’d like to see the Cup schedule drop back to 31-32 events, drop second dates at a few tracks.  I think if you do that, attendance will improve for the track’s remaining date (worked for Fontana) and provide a better sense of urgency through more of the season, though I’m not sure how the shorter schedule would work with the 16-team playoff format (and frankly, if NASCAR ditched that, it would be fine with me). I don’t think the best way to do it is to add more off weeks, but rather start two weeks later and end two weeks earlier…which might have the added bonus of reducing weather issues at some tracks as well.

Neff: In all reality three is the right amount if not one too many. The smart thing to do would be to move the final off-weekend to the week before the start of the playoffs so that the hype for the championship could be pumped up. The other option would be to move one more off week to the week before Homestead to treat the championship like the Super Bowl.

Segal: This is a completely different topic to speak on, but I personally think there should be WAY more off weekends and less races. I’ve been preaching this for years: less is more. Simple, yet most fans haven’t hopped into my bandwagon yet. What’s one of the reasons the NFL is so popular? They have the least amount of game action in the major four sports. No, I’m not saying NASCAR should follow the NFL’s model. But we need people to crave the content, and right now, they’re oversaturated.

If Kurt Busch wins another race, then we can talk about him as a serious contender. Otherwise, he will do what he always does….. run just well enough to keep us talking about him. Let’s remember that his win at Bristol was his first win in over a season and a half. I consider Bowyer more of a threat for the championship than Busch.

As for fan access to drivers … get real … we know some ‘entity’ is making big $$$ selling those access passes. It’s all about the almighty Dollar.
Unfortunately it will take a major incident to reel in the access cash cow. The mixture of booze, weapons, and people not in their right mind WILL undo the fan crush eventually.
Hell, I can remember when pits didn’t allow women and when they were eventually allowed access there was a ‘dress’ code strictly enforced.
Times have changed, yes, but is unfettered access for all better?