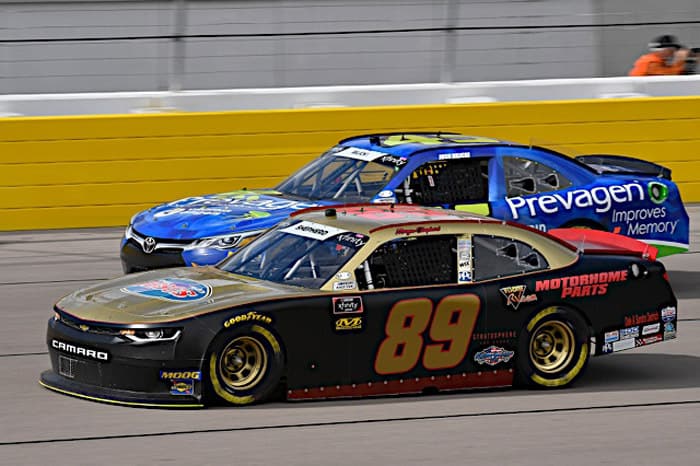 On Thursday afternoon (Aug. 23), news broke that the NASCAR XFINITY Series will trim its field size next season from 40 cars to 38.

On the surface, that change doesn’t seem like a huge deal. After all, no one is watching races to see who finishes positions 38-40. But upon a closer look, this change is a lot more devastating.

Of course, there is the obvious and immediate negative impact that this change will have: two teams will no longer be allowed to race.

If this change were made in the Monster Energy NASCAR Cup Series, it wouldn’t make as much of an immediate difference, as the charter rule has made sure that there aren’t 40 cars trying to race every week. but the top preliminary series always has at least 40 cars show up.

What this means is that teams like Shepherd Racing Ventures, Mike Harmon Racing and RSS Racing’s No. 93 will be pitted against each other in a fight to the death next year. Morgan Shepherd and Mike Harmon have already failed to qualify for a combined 12 of the 22 races so far. With this field reduction, they will fail to qualify for just about every race and cause those teams to fall by the wayside.

NASCAR already has a problem with too many teams shutting down. JGL Racing closed its doors earlier this season, and Fury Race Cars picks and chooses when it races because it doesn’t have the money to go to every track on the schedule.

The reason being given for this rule change is it will allow for the other 38 cars to earn more purse money. The system does need to change back to the way it used to be — where teams can survive on purse money and not have to live off of sponsorship. However, spreading the crumbs that the 39th- and 40th-place finishers earn 38 different ways is not going to make much of a difference on a team’s budget sheet. Sure, owners will appreciate the extra pocket change, but it won’t make any of them financially secure on their own.

In the final race of 2015 — the last Xfinity Series race where purse money was published — the final two drivers in the field earned ~ $30K.

After the 2012 season, NASCAR reduced the NXS field size from 43 cars to 40. We’ve gotten six seasons of the 41st- to 43rd-place money being spread over the top 40 cars, and that didn’t fix the money issues. Because it’s like taking one of those little band-aids that doctors put on a kid’s finger after taking a little blood and putting that on someone that got nuked.

NASCAR’s money system is broken, and the sanctioning body’s leadership needed to come up with an idea to point the economics in the right direction. Instead, it made this move, which only takes it down a darker road long term. It’s as if NASCAR leadership isn’t listening to drivers, mid- to lower-tier teams or fans. Instead, it is only listening to the sponsors and the owners at the top — guys like Rob Kauffman, who scoffed at the idea of non-charter teams showing up to race — who want to distance themselves from the rest of the competition.

I’ve always been a big advocate for NASCAR to institute a spending cap on cars, similar to the NFL’s salary cap. It works just fine in the NFL — the teams at the top are frequently rotating. A spending cap would prevent the top owners from running the rest of the teams out of money. Many seem to think that the spending cap idea is the stupidest idea they’ve ever heard, but at least it’s better than a system where teams lose money if they can’t find a sponsor.

Or how about we get rid of the laser-scanning inspection process so teams aren’t gushing out money to get their own? Or if the XFINITY Series really is a developmental series, “where names are made,” then why don’t we eliminate use of wind tunnels and CNC machines to make the series more about the drivers and less about the engineering? Those changes might actually make racing affordable again, but of course they won’t be used because it would deter Cup owners from stealing candy from baby teams in NXS.

NASCAR is heading down a slippery slope with this change. Next, fields will reduce to 35 cars, then 30, then 25 — until there are so few cars that the racing is boring. I’ve watched races at local short tracks that had low car counts; it’s like watching traffic drive through a roundabout. Meanwhile, the races that have full fields are always action packed.

The first Southern 500 had a 75-car field; can you imagine how awesome that probably was to watch? Think how boring races at Bristol Motor Speedway and Martinsville Speedway would be without lapped traffic causing the rubber band effect.

It’s yet another situation where NASCAR needs to get back to its roots, or more specifically its grassroots. Local short tracks do all kinds of fun promotions and big races with a fat purse to attract drivers and teams that would not normally race at them. NASCAR should be doing things like that to gain new owners, even if just for a race or two.

Instead, we must already start saying our goodbyes to two more XFINITY teams. May no more fall during this coming winter break.

I guess you don’t believe in quality over quantity. In the “race” at Bristol there were EIGHT cars down a lap after 15 laps. To me that is absurd. The field should be based on the size of the track and the short tracks shouldn’t be more than 32 cars and preferably 24 with a few promorter’s choices.

You are correct Ajax. Those back markers are a joke and clearly they aren’t there to “race”. Look at morgan shepherd, he brings it to the garage after about 20 laps, what the heck is the point in having such cars in the field? And Harmon? It looks like he’s down 2 cylinders at the beginning on every race. I get it, these guys deserve a chance to get in the “show” but what they’re doing out there when the green flag falls is an absolute disgrace.

In all this debate that the France family aka Nascar/ISC isn’t reducing their profit margin. And as far as Rob Kaufman he only said what I’m confident the rest of the mega team owners feel. Why reduce their cut of the pie by adding any more teams than necessary?

The lower 2 divisions should have a claiming rule period……………..

While Mike Harmon (and other similar teams) may not make it so obvious as to take it to the to the garage with a “vibration” after5 laps anymore, they are nonetheless start-and-parks who can turn a profit on a cheap car and last place money. As a long time race fan, “making the show” doesn’t mean a damn think unless there is a chance of somebody missing the show. 36-40 cars showing up for a 40 car field is not “making the show”. I’d much rather see a race consisting of 30 or 20 or even 10 competitive cars, than 40 cars where 30 don’t have a remote chance of winning, 20 are backmarkers, and 10 are essentially start-and-park.

Na$car should have a 20 car qualified field and everybody else runs the “B main” and four more get to transfer to the “A main”. Just like real racers do every Friday night.

It seems to be the editorial position of Frontstretch that NASCAR should be some kind of welfare program for back marker teams. It may be hard to accept, but business, including the business of sports, does not generally work that way. If you don’t have the resources to compete at the highest level, you go home or drop down to the level where you can compete. I am really tired of reading about the Underdog House every week or Amy’s “shoutout of the week.” None of the major sports gives out Participation trophies. Neither should NASCAR. When a car is nothing but a rolling chicane, that car should not be on the track, not collecting purse money for getting in the way. Or causing the obligatory late-race caution.