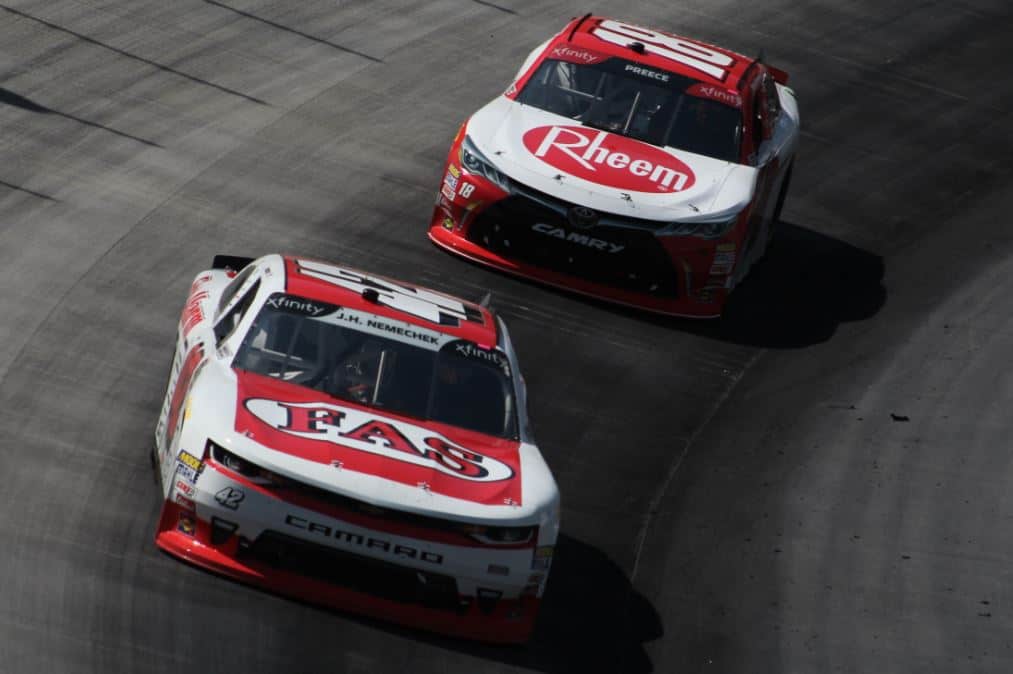 Six years ago, the landscape of the NASCAR XFINITY Series was quite different.

For one thing, the series wasn’t called that. The naming rights were then awarded to Nationwide, which held its sponsorship until 2015, when XFINITY came aboard.

Back then, Monster Energy NASCAR Cup Series driver involvement was in no way curtailed, with drivers merely being unable to score points toward the driver championship at the end of the year, a change that had gone into effect a year earlier. Kyle Busch and Joey Logano still each competed in 22 of the series’ 33 races, and Brad Keselowski added 21.

Oh, and there were 43 spots in each race, a car count the series met in each and every event that season.

Nowadays, things are different. XFINITY is the series’ title sponsor, Cup drivers only have so many races they can enter in a given season (with certain races they’re barred from entirely, whether they want to race or not) and only 40 cars can make each race, the latter a rule that went into effect beginning in 2013.

Things are going to change further in 2019, however. NASCAR announced Thursday (Aug. 23) that the car count for the XFINITY Series will be restricted to 38 cars, down from the 40 that drew it in line with the Cup Series. Additionally, there’s a chance that Cup driver participation in the series, as well as the Camping World Truck Series, could drop thanks to a newly announced rule that limits teams from scoring playoff berths or playoff points if a non-series driver is in the car or truck for that race.

The reason for the former change is fairly simple: money. Specifically, rather than upping the overall purse allotted to teams participating in a given XFINITY race, NASCAR is instead taking the money that would normally be given to the 39th- and 40th-place teams and will divvy it up among the other 38.

That’s different from the usual reasoning for changes like this in years past. Usually, a drop in the number of vehicles in each race was due to either NASCAR-mandated changes such as Cup’s charter system, a general decline in car counts — or both. That was part of the issue when the Truck Series went from 36 to 32 trucks, for instance, while certain tracks still elicited a full field and then some, others ended up far below the maximum amount.

That hasn’t been an issue with the XFINITY Series this year, which is why the move surprised some folks before the purse reasoning was relayed. Each race in 2018 has reached 40 cars, and most have involved DNQs, with very rare instances (see: Kentucky Speedway, Jimmy Means Racing) in which a team pulled out a backup car to run as a start-and-park operation to fill the field.

What the points-related change does is further limit the impact Cup or non-series drivers have on the outcome of the championship. Already, these drivers are limited to a certain amount of XFINITY and Truck series races per year, and none of these drivers are allowed once each series hits its playoffs or during the four annual Dash 4 Cash races. However, previously, while someone like Busch would not score points toward the driver’s championship when racing for Joe Gibbs Racing in the XFINITY Series, a win of his would count toward the owner’s championship, which has gained in prestige in recent years as more teams cobble together rosters with multiple drivers rather than one driver in a full-time effort.

Beginning in 2019, if Busch (or Keselowski, or Logano — you get the idea) wins for JGR or for Kyle Busch Motorsports in the Truck Series, his win will not score the team any playoff points or automatic eligibility for the owner’s championship. So, what does the team get? The purse, of course, plus any non-playoff points accrued from the victory.

Remember, this isn’t just a Cup-related issue. Look at instances when someone like Justin Haley or Noah Gragson jumps up from the Truck Series to XFINITY and challenges for a win in a part-time or one-off effort for a full-time car in the series. It’s a cool story if one of them wins, sure, but that team will no longer score playoff points toward its owner’s championship efforts and will not be locked into said championship automatically.

A change like this not only affects the sport’s bigger organization like JGR or Team Penske. Let’s say this rule had been in effect in 2018. John Hunter Nemechek, running a part-time schedule for Chip Ganassi Racing in the XFINITY Series and for his family-owned Nemco Motorsports in the Truck Series, would not have his Martinsville Speedway count toward Nemco’s owner’s championship hopes pre-playoffs, instead needing to rely on scoring enough points throughout the season to make it in the eight-team field.

Time will tell if either change affects the series in any noticeable way. Though the XFINITY Series has remained fairly healthy in 2018, part of its field still consists of start-and-park operations or teams of a significantly lesser speed than even the mid-pack organizations. It seems unlikely that the teams and cars of substance will be squeezed out of the series.

On the other hand, the owner’s points changes could either force teams to consider drivers declared for points in that series over those that are not in cases when Cup drivers cannot run — or it might curtail Cup drivers’ involvement even further.

Or it’ll just cause everyone to quit caring about the owner’s championship, something a good chunk of Internet commenters will tell you is already the case anyway. So, uh, stay tuned.

got no problem with it, the series slogan is where drivers make names for themselves, at least in Xfinity, so sounds good to me!

As usual, the sports media misses the point when discussing Cup drivers in NXS and Trucks. I seriously doubt Joe Gibbs lives and dies by the hope that he can win an owner’s championship in Xfinity when he really wants all the championship trophies he can get at the Cup level. The main reason for putting Kyle Busch, Logano, Keselowski, and Larson in the NXS cars is for sponsorship money. We are seeing over and over again that sponsorship money is ruling the sport. Teams thrive with it; fail without it.

The business plan for Cup teams competing in NXS and Trucks is to garner enough sponsorship money from the big names to fund the “drivers making names for themselves,” as few companies want to sponsor a guy with no name. Right now KBM funds 3 Truck teams. If Kyle doesn’t drive one of those trucks regularly and gain some prize money to boot, he closes shop just like Brad did. How is that good for the Erik Joneses, Chris Bells and Daniel Suarez’s of the future?

This rule change may give some Cup teams less incentive to race Cup drivers at the lower levels, but overall it will have little impact. Owner’s championships are simply not that big a deal when you are competing for the Big Prize. And the fewer quality rides there are in the lower series, the less chance a young driver can ever make a name for himself.