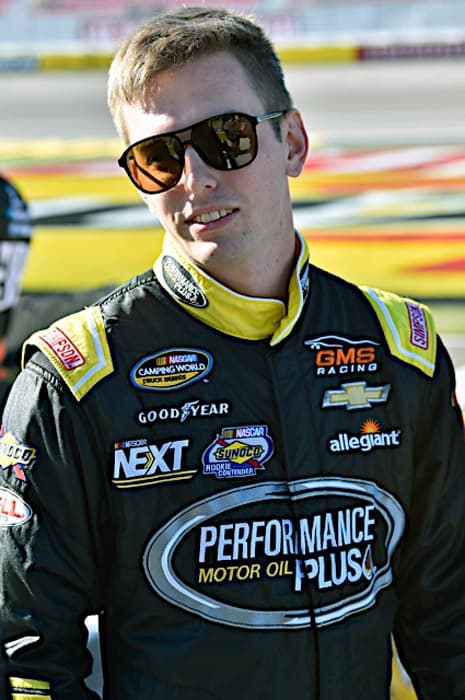 Dalton Sargeant‘s 2018 season just came to a screeching halt on Wednesday (Aug. 22) when GMS Racing announced he would no longer be racing for the organization.

“Due to an unfortunate circumstance with Sargeant Motorsports, Dalton Sargeant will no longer compete with GMS Racing full-time in the [Camping World] Truck Series for the remainder of the 2018 season,” a statement from Team President Mike Beam said. “Until the issue is resolved, Spencer (Gallagher) will serve as the fill-in driver of the No. 25 Chevrolet entry beginning this weekend in Canada. We hope a solution can be agreed up and to see Dalton back racing GMS equipment in the near future.”

Not long after the statement was released by the team, Sargeant put one out of his own, though it didn’t give any further indication of what had actually happened.

In 16 races this season, Sargeant has struggled to find his footing and has just one top five and four top 10s. He currently sits 10th in the championship standings.

Immediately, when the news of a driver being sidelined comes out, the first thought is that the decision is sponsorship related. But if that were the case here, wouldn’t it have made just as much sense for GMS and Sargeant to state that?

Instead, it might be a deeper issue that neither side wants to make public. I wish I could say I have the answer to what exactly is going on between Sargeant Motorsports and GMS, but those that do know the details are being very tight-lipped about the information.

I’ve seen some people mention the Justin Boston/Kyle Busch Motorsports saga from a few years ago, but KBM came right out and stated it was due to sponsor nonpayment. And we all remember how that lawsuit turned out. In fact, most of the issues where drivers have been sidelined in recent years have been very clearly stated as monetary-related.

What I do find intriguing, though, is that the entry list updated on Aug. 21 showed Sargeant’s name with sponsorship from Performance Plus Motor Oil, a partner that’s backed the 20-year-old for much of the season. But if you look at the most recently updated list from NASCAR, Sargeant is still listed as the driver with sponsorship from Allegiant.

So perhaps the problem truly is related to funding.

Could it be sponsorship-related with some sort of performance promise? It’s curious that the timing comes just before this year’s playoffs are set to begin. Half of the GMS teams made the playoffs, and the other driver who didn’t, Cody Coughlin, not only has plenty of family money, but has seen marked improvement in performance this season versus last season when he drove for ThorSport Racing.

Maybe, given past performance by the organization, the sponsor was promised Sargeant would make the playoffs in his rookie season and is now rethinking its contributions since he’s no longer in the championship battle.

Another thing that points toward funding is Beam’s reference to “until the issue is resolved,” which implies that this split isn’t necessarily permanent. You’d think that if there were some sort of a professional disagreement, there wouldn’t be an opening for Sargeant to get back into GMS equipment in the future. That leads me to believe that it’s an issue with sponsor payments in some way.

But with that said, Sargeant hinted he is focusing on his plans for next year and might not race for another team throughout the remainder of the season, saying he is working “hard towards the 2019 racing season.” This only brings on even more questions than answers.

Of course, all of the above is pure speculation, and I’m not sure we’ll ever really get the full story. The bottom line is that, right now, another young talent has been sidelined, and depending on the truth behind what’s going on, it could have the potential to create long-term consequences.

Looking forward to this cool opportunity big thanks to @joshreaume team and the great partners onboard @ZuluAudio @BBMCMortgage #SilkTitle and #shiticoolers . This ones for all my fellow Military service members out there with big goals and dreams. https://t.co/LTtHPFTg2a