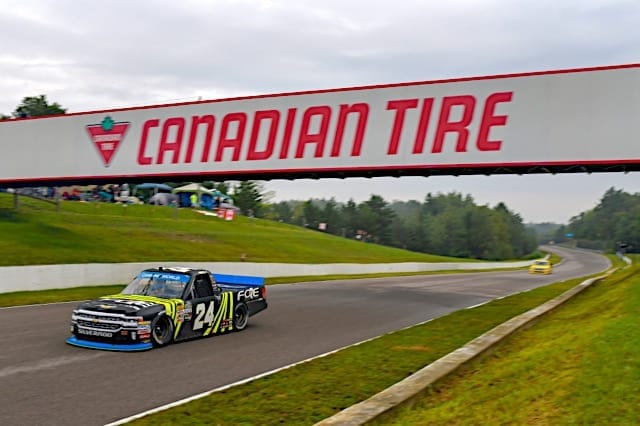 With Gragson pushing his No. 18 Toyota to the inside of leader Gilliland in the final right-hand corner, the move turned both trucks, opening the door for Haley. The No. 24 GMS Racing driver avoided the mess and scored the victory, his second of 2018.

The win also punches his way into the Round of 6 in the Truck Series playoffs.

“I knew going in there that Gragson was probably going to do something not the smartest,” Haley said. “I saw it coming and I knew we were in the catbird seat. It’s amazing. This is one I’ve been chasing for a long time. This one means more than Gateway.

“The dark horses are going to the Round of 6.”

Gilliland was approaching his first series win and was livid at teammate Gragson after the contact.

“I shouldn’t have ever let him get to me. I should’ve given him the inside, maybe let him wreck himself,” Gilliland said. “He’s done it to me on like five or six road courses, which sucks. We had the fastest truck and we didn’t win again.

“I’m going to have to talk to him for sure. I’d go fight him right now but I can’t. I need to get my emotions in check and talk with him. Extremely mad.”

Gragson won both stages on the day and based his reasoning on needing a win to advance in the championship playoffs. However, he apologized for the contact.

“That was on me,” Gragson said. “I apologize to Todd, I apologize to the No. 4 team and everyone at KBM. We’re in the playoffs and I was trying to get a win. It’s just unfortunate, that’s on me.”

With multiple trucks joining the KBM boys in the last-corner chaos, John Hunter Nemechek, who was the center of similar controversy in this race two years ago, came through in second spot.

Brett Moffitt was third followed by Timothy Peters, who by extreme circumstances was put behind the wheel of GMS’ No. 25 entry, in the fourth spot. The part-time veteran was pleased to give back to the team.

“We had a good hot rod,” Peters said. “I got the call 4:30 Thursday afternoon and I had to get a passport. Congrats to Justin [Haley] on the win.”

haley – gragson doing something not the smartest. nailed it.
gilliland – i wanted to fight him. i have a new favorite driver, but he should have said what he was really thinking. everyone else was.

I don’t know when it became the so-called cool thing to wreck someone to get a win but I think it sucks anymore. All it does is make the sport look like a bunch of red neck hillbillies.

Congrats to Justin Haley. The racetrack owed you one from 2 years ago.
If they didn’t do anything to John Hunter two years ago they are not going to do anything now. That kind of driving wouldn’t fly anywhere else. What a redneck sport.