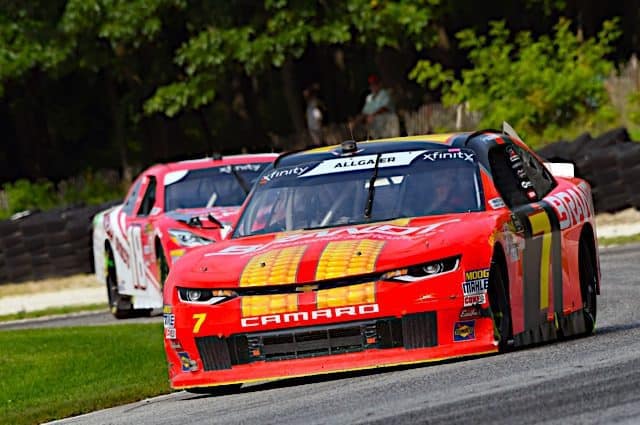 Last weekend, the Monster Energy NASCAR Cup Series took their third and final weekend off for 2018.  For those race fans in the need for a racing fix, both the XFINITY and Camping World Truck Series hit the twisties for some action.  The results were interesting.

Saturday afternoon brought the XFINITY Series to Road America for their ninth visit to the 4.048-mile road course.  The race seemed to have plenty of action.  My notes showed that something of note happened nearly lap of the race.

As compared to last year, the most obvious difference is that BSI made the trip to Wisconsin.  That decision meant that viewers had in-car cameras at their disposal.  Last year’s broadcast had none.

One of the biggest stories of the weekend was Bill Elliott coming out of retirement to drive GMS Racing’s No. 23 Chevrolet.  A throwback scheme to Elliott’s No. 11 Budweiser Ford from 1994 made it that much better.  Then, it got a little annoying. Given the day that Elliott had (pretty miserable, to be honest), he got an outsized amount of coverage that bordered on blushing.  Not quite “OMG” level, but the phrase, “I can’t believe I’m racing with Bill Elliott” was used more than once.

That continued into post-race coverage, where Elliott managed to get post-race interview time when second-place finisher Matt Tifft couldn’t even get airtime.  Elliott finished 20th.  It just seemed weak.

The racing during the 45-lap event was actually quite good.  During most of the race, NBCSN was pretty good in showing viewers that racing.  Late in the race, that coverage narrowed considerably.

The last lap was particularly irritating.  Justin Allgaier had nearly seven seconds on Tifft and was running all by himself.  Meanwhile, you have Dave Burns talking about how there is a bunch of action for position all through the field.  What did viewers see?  A split-screen shot of Allgaier, one pane on his in-car camera and the other following the No. 7.  I would have liked to see some of that action that was being discussed.  Probably not alone in saying that.

In addition to the Elliott coverage after the race, there was only time for interviews with Allgaier and Daniel Hemric in addition to point checks.

Burns and Dale Jarrett did a pretty good job together in the broadcast booth.  They seem to have a good rapport and truly compliment each other on-air.  Having said that, not being on-site does hamstring commentators.  I wish there was a way to guarantee that booth commentators could be on-site for every race because these remote broadcasts are the pits.

In the pits, you the “veteran” Parker Kligerman, along with Landon Cassill in his first appearance as a pit reporter.  Kligerman was his usual solid self.  Cassill seemed to take a little time to get used to the role, but seemed to settle in just fine.  There is a significant difference between being an analyst on NASCAR America and pit reporting.  While yes, there’s plenty of prep work to be a pit reporter just like being on NASCAR America, your questions cannot be prepped.  You have to be ready to go at all times.

With all the Cup drivers taking vacations, pit reporting (in Cassill’s case) or watching TV, you got to see some of the regulars get their proper due, in addition to the ringers.  Katherine Legge did very well in the fourth JD Motorsports Chevrolet to finish 14th, getting some dap from Jarrett in the process.  Ross Chastain earned a seventh-place finish in the discipline that he’s likely the weakest in.  Andy Lally finished 10th despite breaking a rear end part late.

Tough day but a top ten for the team. We broke a bolt and a bracket in the rear end under braking into Canada Corner which let the pinion angle change and the truck arm move all over (sadly I can’t even explain this right) I could hardly keep it straight for the last 6 laps.

Apparently, those issues led to contact with Jeremy Clements in Canada Corner late.  We did not see that, but the two drivers talked it out and appear to be good now.

Lally’s plight in the race on Saturday is just one reason why Road America might be the toughest track in the United States to broadcast a race from.  There’s just so much going on and the place is so huge that you’re bound to miss a bunch.  Having said that, NBCSN doesn’t need to help themselves miss even more.

Sunday afternoon’s Camping World Truck Series race at Canadian Tire Motorsports Park was very interesting from a TV point of view.  There are three big topics that stand out.

First of all, the finish.  Shenanigans went down once again.

This is the fourth time in six races at CTMP that the leader has gotten dumped on the final lap of the race.  It’s the third time that it’s happened in the final turn.  It’s ridiculous.  It’s wrong, but NASCAR isn’t going to do a dang thing about it, no matter how blatant.

Rant aside, we have to look at how this was covered.  Just like last year, Michael Waltrip had an inkling that heck could go down.  He was proven correct.  It’s just so predictable.  It’s as passé as post-race donuts.

I’m not quite sure what led to Alex Tagliani getting dumped on the cool-down lap by Cody Coughlin, but it was not even noted on the broadcast.  That’s a mystery.

Then, we had the post-race interviews.  Alan Cavanna got the honors of interviewing both Todd Gilliland and Noah Gragson.  These were good interviews.  We got good, meaty quotes from Gilliland especially.

Granted, that wasn’t quite as bad as Sunday’s incident, but it shows that this isn’t new between the teammates.  The KBM team meetings this week should be interesting.

FOX Sports 1 clearly planned in advance for this situation.  Sure enough, the heck went down again.  Cavanna really came to play and he made FOX Sports 1’s coverage of this mess that much better.

Immediately prior to that whole mess, there was a power outage that led to a four-minute commercial break with less than six laps to go in the race.  This truly stinks, but it’s something that is outside of FOX Sports 1’s control.  The power issues were an on and off issue for much of the day.  Perhaps some equipment got waterlogged on Saturday when it rained.

What did viewers miss during that time?  Some racing for position and a caution for Austin Wayne Self spinning out…somewhere.  I don’t know where that spin occurred because the commentators never told viewers where it happened.  Yet another instance of where FOX Sports 1 is hurt by a remote broadcast.  That caution set up the aforementioned GWC.

Third, the caution at the end of Stage No. 2 lasted for more than seven laps around the 2.459-mile road course.  Why?  Someone dumped a buttload of fluid on pit road and NASCAR took time to clean it up.  I don’t know who it was because that wasn’t mentioned on the broadcast.  The results suggest that it was from Jennifer Jo Cobb‘s No. 10, which had dropped out due to an oil line issue after completing 32 laps.  However, Cobb dropped out of the race around the time of the previous caution.  If that was so, they could have cleaned it up then.

It seemed to take forever to clean up the fluid and very little information was being relayed to viewers.  Unlike the power issues, this was something that was fixable, both by NASCAR and FOX Sports 1.  FOX Sports 1 could have gotten more information to give to their viewers to explain why the caution at the end of Stage No. 2 lasted nearly 25 minutes.  NASCAR could have thrown the red flag in order to get everything cleaned up and give viewers and fans at the track more green flag racing.

Overall, I felt lost for much of the day.  There’s a lot more to cover at a road course as compared to even Michigan or Texas.  The technical issues probably caused that to a certain degree, but we couldn’t even get replays for a number of incidents.

FOX Sports 1 did a good job at keeping viewers updated in regards to the various pit strategies.  However, we didn’t even get a good preview for the race itself during NASCAR RaceDay – CWTS Edition. One of the interesting stories entering the race was the fact that Sunday was Stewart Friesen’s first-ever road race.  Modifieds and sprint cars race on a number of different types of race tracks.  Road courses are not in there.  A piece on how a driver like Friesen learns how to road race could have been a pretty good idea.

That’s all for this week.  Next weekend, the Monster Energy NASCAR Cup Series returns to action at Darlington Raceway for Throwback weekend.  Always a jolly good time.  The XFINITY Series will be there as well for support.  The Verizon IndyCar Series travels to Portland for the first major open-wheel weekend at Portland International Raceway since 2007.  Formula 1 has their final European race of the year at Monza in Italy.  Finally, the Pirelli World Challenge season comes to an end at Watkins Glen International.  TV Listings are in the television tab.

We will provide critiques of the Cup and XFINITY races from Darlington in next week’s edition of Couch Potato Tuesday here at Frontstretch.  The topic for this week’s edition of the Critic’s Annex is currently undecided.

Phil Allaway has three primary roles at Frontstretch. He's the manager of the site's FREE e-mail newsletter that publishes Monday-Friday and occasionally on weekends. He keeps TV broadcasters honest with weekly editions of Couch Potato Tuesday and serves as the site's Sports Car racing editor. Outside of Frontstretch, Phil is the press officer for Lebanon Valley Speedway in West Lebanon, N.Y. He covers all the action on the high-banked dirt track from regular DIRTcar Modified racing to occasional visits from touring series such as Tony Stewart's Arctic Cat All Star Circuit of Champions.
Previous Bojangles Southern 500 Entry List
Next The Underdog House: Small Teams Hit Top 10 at NASCAR Road Courses