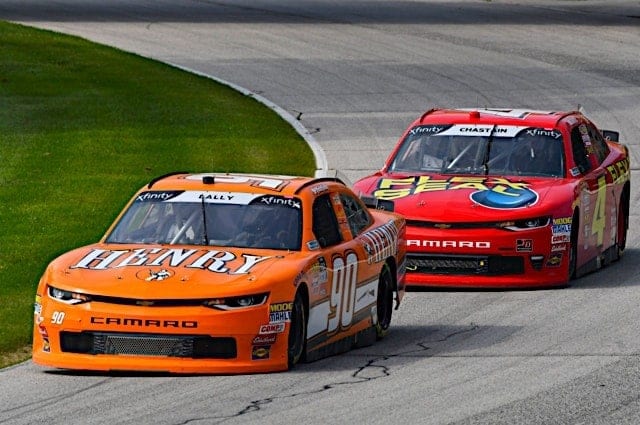 With the Monster Energy NASCAR Cup Series enjoying their third and final off-weekend in 2018, the spotlight hit the ladder series this weekend.

And what good timing, as both XFINITY and Camping World Trucks hit road courses while the Cup Series watched from the barcalounger.

That circumstance, no matter the track layouts, would offer big opportunities for the small teams of each respective series. Not only were they the main events for the weekend but with no Cup race on Sunday, Cup drivers were not to be found in either Road America for XFINITY or Canadian Tire Motorsport Park for Trucks.

Combine that with the interesting entry lists for both events and we had much potential to see new guys in the top 10.

Thanks to wild action, memorable finishes and gutsy strategy, some underdog teams left the road in a happy mood.

Starting with the XFINITY Series, the Johnsonville 180 was competed on Saturday (Aug. 25) from Road America. And out of all the races run in 2018, this one perhaps had the most diverse field.

From 1988 Cup champion Bill Elliott to IndyCar’s Conor Daly and Weathertech SportsCar’s Katherine Legge, the race had all the expertise you could ask for to come together for 44 laps of competition.

In terms of the underdog teams, they had a few of their new or returning drivers jump to the top 15 on the Wisconsin circuit. It started with Ross Chastain, the JD Motorsports driver who came home seventh.

The opportunity to pounce came when Justin Marks and James Davison spun from podium positions. Though Marks fell to sixth, the contact let Chastain pass Davison’s No. 18 to get seventh. The finish was his sixth top 10 of 2018, the most of his career, and it comes one week before his debut with Chip Ganassi Racing at Darlington Speedway.

Behind Chastain’s run was Andy Lally, who is marked as one of the premier road course talents to hail out of the United States. Lally returned with Mario Gosselin to make his second start of the year, ending it with a 10th-place run.

Just outside the top 10, you find Jeremy Clements in 13th. This guy was branded all around the track as the event’s defending winner, scoring the shock victory one year ago in his family-owned No. 51. Though no return trip to Victory Lane, Clements was a top-10 car most of the afternoon, finishing fifth in stage one and coming home with a solid top 15.

Speaking of top 15, Katherine Legge and Garrett Smithley made it a solid day for JD Motorsports when they brought their cars home clean in 14th and 15th, respectively. Legge especially impressed, as the British driver drove from 26th on the grid to the top 15, maintained a top-five position for multiple laps following a turn of strategy and came back from a spin to finish 14th. All in her second-ever XFINITY start. Good day from the sounds of it.

One more honorable mention for XFINITY is Ryan Ellis, the part-time driver/PR representative who made just his second start of 2018 for BJ McLeod Motorsports. The day ended with a 17th, the best finish for the No. 78 team all year and Ellis’ best since a 15th at Daytona in 2016.

Turning to the Truck Series, 65 laps of racing were turned Sunday in Canada and a few fresh names were added to the entry list for the series’ playoff starter.

One of those men was Alex Tagliani, the Canadian who started and finished 10th for Young’s Motorsports. Overcoming a late spin, the road course ace avoided the last-corner chaos to earn his first top 10 since 2015 in the series.

DJ Kennington, too, raced in home turf and brought a small Truck team near the front, as he finished 12th in Premium Motorsports’ No. 49 Chevrolet. The result tied the team’s best in 2018.

Austin Hill didn’t tie his best of the year, he surpassed it by finishing eighth for Young’s Motorsports. The Georgia native, in fact, earned his career-best finish on Sunday in his first full-time Trucks season.

There were a few small teams who had the potential to be better in each race.

Starting in XFINITY, Alex Labbe was one guy who had some expectations heading to Road America. The Canadian driver scored his first top 10 at Mid-Ohio and brings successful road course background to a track like Road America.

However, the No. 36 wasn’t able to pierce through the top-15 bubble, finishing 16th.

Ryan Sieg was another guy who threw his name in the hat for a short run, leading the field to green through pit strategy on lap 31. Unfortunately for the No. 39, a spin would trap him in the sand dunes for a period of time and he was unable to bounce back, finishing 26th.

Scott Heckert and Josh Bilicki were two final road course talents who had runs cut short. Heckert was “caught up in someone else’s mess” late to finish 29th while Bilicki suffered lost brakes in Turn 1, leading to a crash and a 30th-place finish.

Turning to Trucks, Jordan Anderson was one guy who chose to run a throwback scheme this weekend at Mosport. Given how the series will not run next week’s Throwback Weekend at Darlington, it was a classy move.

However, it didn’t make him inalienable to trouble, as the white-and-red No. 3 spun off course to injure his track position. The full-timer managed 16th.

Massive thank you to @HenryRifles for their wonderful support this weekend and for helping out this small, hard working team. P10 with plenty of struggles that we fought through. Thank you for the opportunity. pic.twitter.com/EIFrRKgFtb

So proud of my team @youngsmtrsports!!! Congrats @_AustinHill and @tagliani for getting us in the top-10, but hate my man @maxtullman had problems – he will be back! Fun watching everyone this weekend ? ? love ??!!

Thanks to @BillElliott9 I got to have a total fan girl moment this weekend! ?? pic.twitter.com/MhURkiRTu3