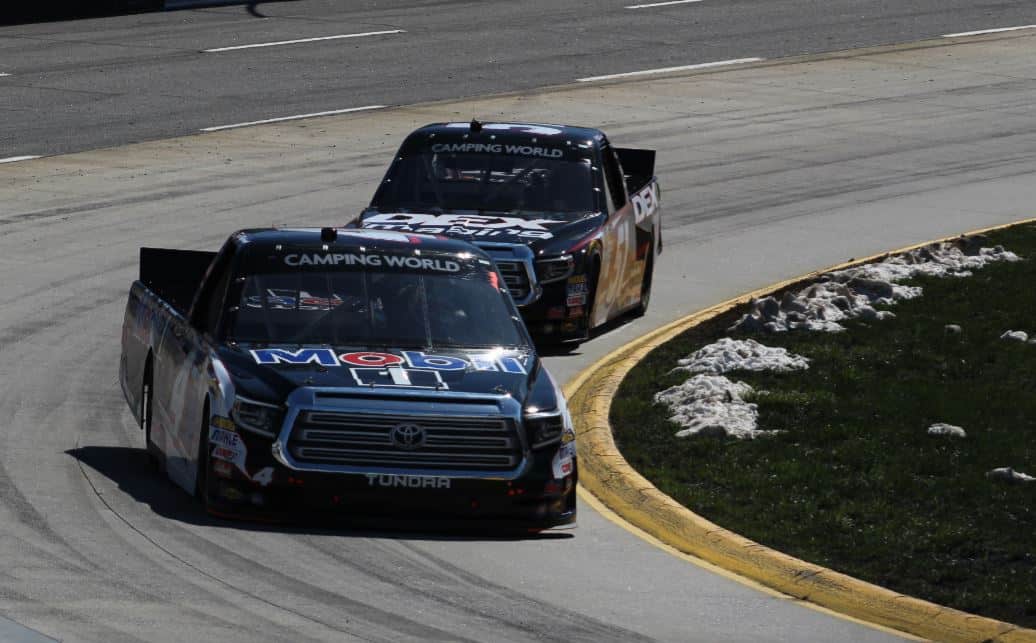 In a Nutshell: Team owners who have multiple drivers have one concern above all others when it comes to competition among teammates: don’t wreck each other. Well, at Canadian Tire Motorsport Park on Sunday, Kyle Busch may have missed an opportunity to remind his drivers, Noah Gragson and Todd Gilliland, about such a rule. The two Kyle Busch Motorsports drivers came together while battling for the lead in the final corner and both went for a spin, handing the victory to Justin Haley.

Who Should Have Won: Gilliland did have the lead coming to the final turn. But until the caution waved with four laps remaining, the rookie had a three and a half second lead. Gragson had no chance of finishing within sight of his teammate without that last yellow.

Race Rundown: For the second year in a row, Gragson had a truck capable of winning. After finishing second in 2017, the KBM driver had his sights set on this year’s visit north of the border. After qualifying second, he took the lead from pole winner Ben Rhodes on lap seven.

Gragson would go on to win both stages, leading 35 laps. However, Gragson would be victimized on pit road and dropped back to ninth following stage two. In the final stage, Gilliland took the lead from Johnny Sauter after a restart with 13 laps to go. Gragson charged up through the field to second as the laps wound down. Unfortunately for him, Gilliland had over a three-second lead and was pulling away from the field with less than three laps to go.

Then the yellow flag waved for Austin Wayne Self who had an incident in Turn 3. Just like that, the competition was right on the bumper of the No. 4 Toyota Tundra.

Gilliland got a good restart but Gragson stalked him over the final two trips around the 2.459-mile road course. As the duo approached the final corner, Gragson took a hard inside angle to the corner. He moved to the inside of his teammate, the two made contact as they exited the turn, and both trucks spun backward.

Haley came charging through as both tried to get their trucks pointed the right direction. He flashed across the line to score his second career NASCAR Camping World Truck Series win. Haley, who earned a spot in the playoffs with his first win at Gateway, now ensures that he will advance to the second round after Talladega next month.

Gilliland was not impressed with his friend and teammate following the race.

“We had the fastest truck and we didn’t win again. I’d go fight him right now but I can’t,” Gilliland said after the race. “I’m extremely mad.”

For his part, Gragson took the blame.

“That one’s on me. Just racing for the win,” he explained. “We’re in the playoffs and I was trying to get a win.”

Quick Hits: After Dalton Sargeant was released from the GMS Racing No. 25 truck this past week, the team announced that Spencer Gallagher would be taking over the ride. However, Gallagher injured himself this week and was unable to compete. Former truck winner Timothy Peters was available and stepped into the truck. Peters steered clear of the last lap calamity to score a fourth-place finish, the second best result of the season for the team.

Alex Tagliani, who won the weekend’s NASCAR Pinty’s Series race, was moonlighting in the No. 12 Chevrolet. Tagliani recovered from a mid-race spin to come back to finish 10th.

Norm Benning and his low budget operation had a stellar race on Sunday. Benning piloted his No. 6 to a 20th-place finish, his second-best showing of the year. Additionally, it was his first lead lap finish since the opening race at Daytona.

No. of rookies to finish in the top 10: None

Got wrecked last corner @CTMPOfficial in the lead very proud of my team brought me a great truck and I feel like I ran one of the best races I’ve ever ran. EXTREMLY frustrating to have it taken away by someone like that. We will try and win the rest.

Let’s not pretend the 18 wasn’t at his door and forced to the curb. If you think Noah should’ve backed out of this move for the win, y’all are tripping. pic.twitter.com/T9OMmzqUPC

All the arm chair race car drivers need to calm down! I feel bad for both drivers and all at @KBMteam Yes terrible execution but @ToddGilliland_ trying to win his first race & @NoahGragson trying to guarantee into next round! Last corner of last lap! #NASCAR #FB

Up Next: The Camping World Truck Series has some time off before heading to Las Vegas Motor Speedway in nearly three weeks (Sept. 14). Ben Rhodes is the defending race winner. The green flag is slated to wave shortly after 9 p.m. ET on Fox Sports 1.