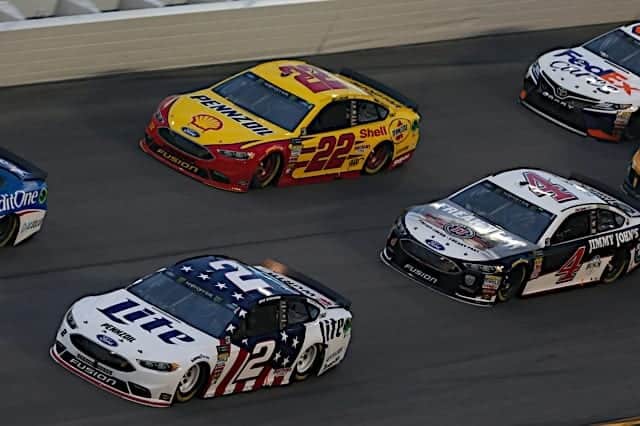 There is a battle brewing among the Ford teams in the Monster Energy NASCAR Cup Series.  With the postseason just weeks away, all four Stewart-Haas Racing cars are poised to make the playoff field.  Team Penske has all three of its drivers heading for the playoffs as well.  With at least seven drives ready to duke it out for the championship, Ford has been able to capitalize on its strong start to the 2018 season.

However, the circumstances of Ford’s performance have changed since Daytona.  Brad Keselowski’s victory in the Clash and Ryan Blaney’s triumph in the first Duel suggested that Team Penske would be in for a promising year.  But restrictor plate wins have not translated into additional victories for The Captain on shorter tracks.  Joey Logano’s victory at Talladega Superspeedway is still the only win for Team Penske in a full-field, points-paying Cup Series race.

Stewart-Haas Racing, on the other hand, has taken NASCAR by storm.  Kevin Harvick has garnered most of the headlines, winning seven races plus the All-Star Race.  Clint Bowyer is one of only three multi-race winners besides Harvick.  Kurt Busch’s future at SHR is in doubt, but he won at Bristol Motor Speedway last week and has posted six consecutive top 10 finishes.  Aric Almirola is having the most consistently strong season of his career.

The rise of SHR means that Penske has new competition within the Ford ranks, competition that the team has not had to deal with in years.  When Penske rejoined Ford in 2013, it left its undisputed position at the top of Dodge’s NASCAR operations to share the blue oval spotlight with Roush-Fenway Racing.  Since then, RFR has experienced a slow decline, elevating Keselowski and Logano Ford’s likeliest championship contenders each season, until Stewart-Haas made the switch.

Penske’s Ford supremacy was not instant.  Keselowski went into 2013 as the defending champion, but hit a lull during the summer and completely missed the Chase.  His only win came in the fall event at Charlotte Motor Speedway.  Logano, brand new to Penske, fought through an up and down season before winning at Michigan International Speedway in late summer and squeaking into the Chase.  Roush-Fenway won a combined three races and put veterans Carl Edwards and Greg Biffle in the postseason.  Logano actually wound up beating Biffle for eighth place in the standings that year by two points, while Edwards struggled through the Chase and finished 13th.

The following season, the numbers were more lopsided in Team Penske’s favor.  Logano and Keselowski exploded for 11 wins, five by the No. 22 team and six by the No. 2 team.  Both drivers reached the third round of the Chase, with Logano advancing even further to the championship event.  Meanwhile, Biffle went winless and got eliminated from the postseason in the first round.  Edwards won twice during the regular season and made the Chase, but finished outside the top 10 in the last 10 races more often than not.

With Edwards leaving RFR and Penske’s two car operation looking more well-balanced than ever, there was a sense that The Captain’s future looked brighter than Roush’s heading into 2015.  Indeed, Keselowski and Logano have been competing for wins and championships ever since, while RFR looks like a shell of what it once was.

Fast forward a few years, and Stewart-Haas’ transition to Ford looks remarkably similar to what Team Penske experienced.  Busch started off the Ford-SHR union with a bang by winning the Daytona 500, but it was to be his only victory of the season.  Harvick and the No. 4 team scored the organization’s next win at Sonoma Raceway.  Harvick was having a good season up to that point, but it looked like the manufacturer switch had cost the No. 4 team some of the overwhelming intermediate track speed it had enjoyed the previous years.

Ultimately, Harvick and Busch represented SHR in the 2017 playoffs.  Busch had a rough first round and got eliminated early, but Harvick advanced to the championship race with a win at Texas Motor Speedway.

Keselowski joined him as a title contender in that race, though neither of them walked away with the big prize.  He had scored a victory at Talladega Superspeedway in the postseason to go along with two from earlier in the year.  Logano won once at Richmond Raceway, but a postrace penalty resulted in Logano not being able to use the win to qualify for the playoffs.  The No. 22 team wound up missing the playoffs entirely.

In short, Team Penske and SHR had comparable seasons in 2017.  Each organization placed half of its drivers in the postseason, and one advanced to the championship race.  Penske was able to beat SHR’s win total with half the drivers, suggesting that the team with a longer relationship with Ford had the upper hand over the newcomers to the blue oval, just like in 2013.

But in 2018, the more tenured Ford team is lagging behind in terms of wins.  Stewart-Haas Racing has posted 10 victories through 24 races to Penske’s one.  SHR’s drivers have also earned 28 top fives (an average of 7.0 per driver) and 56 top 10s (averaging 14.0 per driver).  Team Penske’s trio has 17 top fives (5.67 per driver) and 41 top 10s (13.67 per driver).  No doubt that Penske has been right on Stewart-Haas’ heels in terms of quality finishes, but the glaring difference in victory totals makes it look like SHR has been upstaging Penske all year.

To be clear, Team Penske is not in danger of a decline in the way that Roush-Fenway was at the end of 2014.  Roush gambled that Ricky Stenhouse Jr. and Trevor Bayne would blossom into weekly contenders, which never happened.  Additionally, the team struggled to get Stenhouse on stable sponsorship footing for several years, and lack of sponsorship brought an unceremonious ending to Biffle’s career.

Keselowski and Logano, on the other hand, have proven their mettle as Cup Series racers.  Penske can rely on their experience and winning record.  Blaney has had some good runs spoiled by mistakes and bad luck this year, but his overall progress suggests that he is living up to his reputation as one of NASCAR’s stars in the making.  But as good as Team Penske’s future looks, it is no longer alone atop Ford Mountain.

A good performance in the playoffs, and obviously a championship, would give Penske the advantage over Stewart-Haas Racing once again.  This year, stories about Ford’s success have transformed into Stewart-Haas’ success, but the final chapters of the book are yet to be written.  Harvick, Busch, Bowyer, Logano, Keselowski, Blaney, and in all likelihood Almirola will meet in the playoffs.  We will find out soon which of them become Ford’s true title contenders.

Unfortunately, I haven’t seen anything that indicates that Penske teams will be a contender for the championship. Logano and Blaney have had some decent runs recently but have nothing to show for them, while Keselowski, the lone Penske driver with a championship, seems to be getting worse and worse each week. They are all missing that critical ingredient necessary for being a threat week I and week out… speed. Because of that, none of the Penske drivers have the playoff points that Harvick has, and that will hurt them in the middle rounds of the playoffs. I’m afraid Penske competing for the championship this year is a pipe dream, but a fan can hold out hope, I guess.

Agreed. Where is Roger in this embarrassment? Shame on the whole Team Penske. Logano and Kes have proven their worth and Team Penske putting out rah rah stuff of them getting a position in the top 10. Wow!!!!!! But true, and sad. They are doing these two drivers a huge disservice! And where is anybody to fix this obvious problem? And it ain’t the drivers…….Anybody that thinks they will get anywhere with the current state of affairs is not dealing with reality.