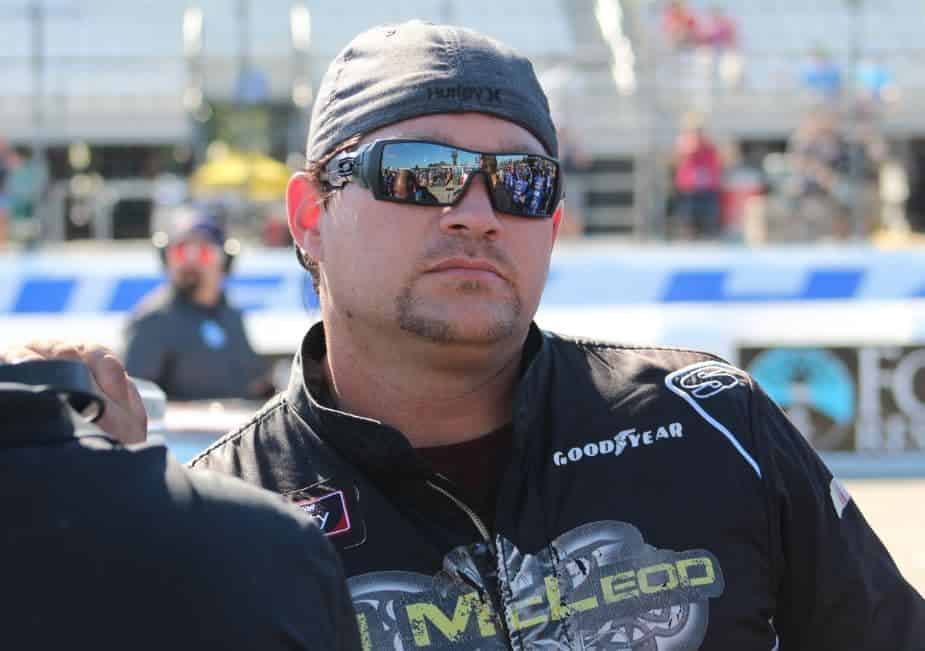 Over the past four years, the name BJ McLeod may have flashed across the TV screen during a NASCAR race, and people weren’t aware of who it was. Little do they know, it’s a skull-lovin’, tattoo-wearin’, down-to-earth racer, who happens to own B.J. McLeod Motorsports in the NASCAR XFINITY Series and has taken drastic steps to up the team’s performance in recent seasons.

McLeod, 34, has competed in NASCAR since 2010, making his Camping World Truck Series debut at Martinsville Speedway with Germain Racing where he finished 17th.

Six years later, and McLeod opened the aforementioned B.J. McLeod Motorsports, where the driver raced a full season in the No. 78 car and finished 20th in the driver standings with a trio of 19th-place finishes. In 2017, McLeod ran in 25 events, allowing 12 other drivers to turn laps in one of his machines. Most notably, Jeff Green led 18 laps and finished 10th at Talladega Superspeedway — the organizations first top-10 finish.

Now six months into the 2018 season, and McLeod has started 18 of the 23 XFINITY races. 11 of which have been in a ride he’s owned while also driving for Mike Harmon in the No. 74 car at Michigan International Speedway and Johnny Davis for his last six events, dating back to Iowa Speedway in mid-June.

While McLeod runs the day-to-day operations at BJM, he relishes the opportunity to race against his team. It’s something NASCAR hasn’t seen in many years, since owners such as Michael Waltrip in the mid-2000s and Dale Earnhardt Sr. in the late 1990s race against their own teams.

“I enjoy it. The first race I drove for Johnny [Davis, owner of JD Motorsports] was at Iowa [Speedway], and Tommy Joe [Martins] was good that day, and I chased him like crazy and passed him,” McLeod told Frontstretch of competing against his teams. “I drove off and passed him and left him by about nine or 10 car lengths and then realized he was saving tires a little bit. So I was like, ‘oh no,’ and got passed back. It was fun. I was trying to outrun him, not help him in any sense. I enjoy it because it’s fun.”

And that old adage “rubbing is racing” is true, even when racing against cars you own, per McLeod.

“As far as the owner on my side, I don’t care if I get into him,” he said. “I told Tommy Joe, ‘when you’re racing me and we’re in cars that I own, don’t treat me any differently than anyone else on the track. If you slide into me, get into me, whatever. Make sure it’s the same thing you would have done to anyone else. Do not pay attention to who’s driving the car.’

“I’ve done that in every racing series I’ve ever been in. You race car numbers, not drivers. I just race the racetrack, and hopefully everybody else gets out of my way.”

The team’s shop in Mooresville, N.C. has 22 chassis. And even though McLeod mentions it has the budget of a 30th-place race team, a little body damage isn’t going to kill the team financially and gaining those extra spots should help out in the long run.

“The thing is, if you look at it like, ‘B.J. said, I’m not allowed to slide into my teammate or the other car this weekend,’ well, they are going to be driving like that in their head and not focusing on racing,” McLeod said. “They are going to lose three or four spots because of what I said. Those three or four spots could easily pay for a tire mark or something… You’ve got to use your head, but it’s more beneficial to me for [them] not be worried about me saying, ‘oh, we can’t hit team cars against one another.’”

For McLeod, a driver that has over 100 super late model victories to his name, he believes he could be a top driver given the circumstances and amount of money a team has to operate on.

While racing in six races for JD Motorsports in the No. 15 car, McLeod earned a best finish of 19th at Bristol Motor Speedway, equaling his best finish of the season — a 19th at Talladega in his own equipment.

“Johnny’s car is really fast. If we tried really hard with that car, we could run top 15, easy,” McLeod said. “That thing has got good speed, and he’s got good people. It honestly reminds me a lot of my people. I love my people, and it’s the only reason I have a team, because of the great people that help me. It’s like when you go over there, you see a lot of the same things, and they are fun. I feel like I’m driving my own car, but I was driving for Johnny.”

In three seasons as an XFINITY Series team owner, McLeod’s team have statistically gotten better each season. Through 24 races this season, the organization has eight top-20 finishes, on track to beat its record of 11 last season.

But the company still faces a weekly battle of sponsorship, which would help elevate the Nos. 8 and 78 to the next level.

Every NASCAR team starts out small, such as Hendrick Motorsports in the 1980s, Joe Gibbs Racing in the 1990s or Stewart-Haas Racing in the early 2000s. But McLeod plans on owning a team until he’s 60 years old, which would be 2043.

“For some teams, three years can be a lifetime,” McLeod said. “The way I look at my team, three years is 10 percent of how long I’d like to be here. If that’s the case, it doesn’t matter if I’m top 10 now or three years from now. I’ve got the time to establish my team, make sure everyone knows I’m real, keep working and find the right partners.

“Sooner or later they are going to say, ‘you know what, BJ isn’t going anywhere.’ This guy just keeps trying. He doesn’t quit. They are going to say, ‘lets help him,’ and this isn’t NASCAR helping me, NASCAR already helps me. The right advertising partner is going to say, ‘I like what this guy has done. He’s been here three, four, five, six years. he’s gotten better each year without a lot of backing, so lets try him out this year and see what he can do.’ When I get that opportunity, I’ll be able to elevate myself to 15th, to 10th-place finishes on average. Once I do that, then we’re there, that’s it.”

The owner confirmed the team’s already building race cars for 2019, and he plans to own a Cup team within the next five years. As far as the final nine races of 2018, McLeod would like to get his teams to have 22nd-place speed, if not better. They currently sit 24th and 28th, respectively, in the owner standings.