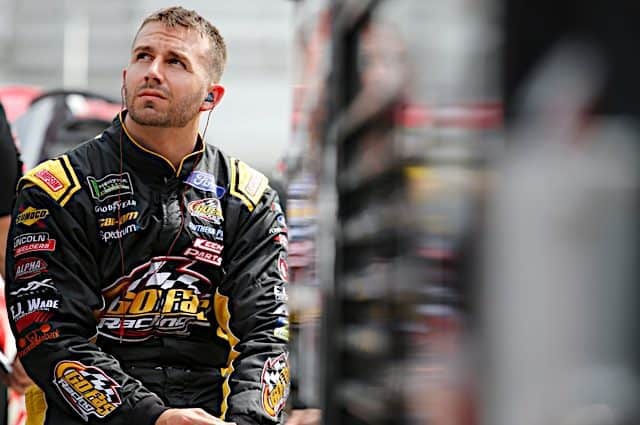 If you were to ask around in the NASCAR garage who is the most underrated driver in the Monster Energy NASCAR Cup Series, many would point to Matt DiBenedetto, who’s in his second season with an underfunded Go Fas Racing.

DiBenedetto, 27, is in the midst of his fourth full-time season in the Cup season and has a best finish this year of seventh at Daytona in July. In his first year with Go Fas Racing, the No. 32 team recorded a pair of top 10s, in arguably the two biggest marquee events on the schedule.

Through the opening two-thirds of the 2018 season, DiBenedetto sits 30th in the championship standings, up two spots from last year. The No. 32 car has 11 top-25 finishes, more than it did in the entire 36-race schedule one season ago (10).

DiBenedetto recently chatted with Frontstretch to discuss 2018, competing for an underfunded team, how racing for Joe Gibbs Racing in the XFINITY Series affected him as a driver and what his future may hold.

Dustin Albino, Frontstretch:  This season, you’ve got the seventh-place finish at Daytona in July. Overall how would you assess 2018?

Matt DiBenedetto: I would say it’s been pretty good. You’re going to have your ups and downs as a small team and some struggles. That’s part of it, and you try to eliminate as many of those mistakes as possible. As a team, I feel like we’ve made the most of what we have, and have overachieved quite often. We got a seventh-place finish at Daytona. A lot of top 20s, tons of top 25s and we beat cars with a significantly higher budget than us on a weekly basis, usually. I’m pleased with that.

Albino: What have been the biggest strengths?

Albino: During the first 10 races of the season, the No. 32 team had six top-25 finishes. How much were you overachieving at the beginning of the season with the budget you race with?

DiBenedetto: It changes week-to-week. We look not so much at the finishing position because some races can be different, some races can have a lot of attrition, some not. On a weekly basis, we just look at some of the cars we outperform and that’s what we base it off of.

When we beat the Front Row cars, the No. 13 car, if we’re running with the JTG cars or whatever. At Richmond, we legitimately finished 16th without attrition. We beat a ton of top teams, so we look at who we beat at the end of the day and we beat quite a few cars on a consistent basis.

Albino: When you get those finishes like Richmond, how does that make you feel as a driver?

DiBenedetto: It may sound silly, but it’s kind of like a win for us. It’s satisfying. It’s all relative. Michael McDowell taught me this lesson and I won’t ever forget it. He said ‘when you always want more, listen, it’s all relative.’ When you have those finishes like when you finished 16th at Richmond, 17th at Sonoma, 16th at Texas, seventh at Daytona, those are like wins for us. When you’re with a top-funded car and finish 16th, you may be disappointed. It’s all relative. I’m running on what should be a 30-something place budget, so when we finish 16th, that’s like a win for us.

Albino: Have you seen an outreach from sponsors this season?

DiBenedetto: I just try to be myself on social media, nothing crazy. I think that’s attracted some of these sponsors and some of these brands. I think everyone can feel how passionate I am, and we are as a race team and how I strive to be the best I can be at what I’m doing. I think that resonates with people and that I’ve had to do this the old-school way, and we have a hard-working little team. I think sponsors find that story very neat and want to be a part of it and we’re lucky to have those guys.

Albino: After the Twitter video heading into Phoenix, was it surprising to have sponsors reach out to you so quickly?

DiBenedetto: Yeah, especially such a large company like Zynga Poker. It’s kind of ironic that I’ve played poker since I was five years old with my family. I’ve played Texas Hold ‘Em my whole life, so it was pretty neat when they reached out and you can do it right from the convenience of your phone, too and play against people live. It was pretty ironic, neat and cool that they reached out the same day. They thought the story was cool and wanted to jump on board and help. It’s cool that people feel how hard we work here and want to be a part of it.

Hey guys, have you tried the new @WorldPokerTour Sit-N-Go Game mode on @ZyngaPoker? I love the new blind timer that they included. What do you like most?

Albino: Has the team’s budget increased at all from last season?

DiBenedetto: It’s pretty similar, probably a little bit more with some of the sponsors we’ve had come on board. Sponsors get a good bang for their buck at our operation and we can give them a lot and it helps us too as a team. It’s a good all around deal working with those guys.

Albino: What’s been the biggest compliment someone has given you?

DiBenedetto: The Phoenix deal for sure when Denny Hamlin, Kevin Harvick and Darrell Waltrip – those are guys I’ve looked up to my whole life. I’ve been a Harvick fan for a long time, and Denny I’ve watched since I was young. For all of those guys to have that much respect, that was overwhelming. I was just about in tears, actually, because people that you’ve looked up to your whole life think that much of us and our team to try and help and spread the word that they jumped on board and help us, which they did not have to do. That’s the biggest compliment I’ve ever received in my life, hands down.

Albino: What do you think they saw in you?

DiBenedetto: I’m not sure. That’s a question I would actually like to ask them. I think people can feel how passionate I am about this sport in general and how passionate I am about racing and that I invest my whole life in this. I don’t do anything else, I’m not good at anything else and I don’t really care about anything else. I’m just a racer. I hope that resonates with people and maybe those guys see that and can tell I work really hard at this and I want to be a bigger part of this sport. That’s my main goal.

Albino: How did racing at Joe Gibbs Racing in the XFINITY Series help you as a driver in 2009 and 2010?

DiBenedetto: It taught me a lot. I’m very thankful for it and I wouldn’t be here without them and that opportunity. I’ll say it the way it is, I was too young, too inexperienced, wasn’t ready mentally, all of that. That was a tough situation. Nothing on them, they wanted to give me that opportunity, but it taught me a lot. I wasn’t in a car much, ran those few races which were spread out and I didn’t do a good job at all. If I were able to redo that opportunity now, I would have went out and waxed the field in those cars. They were amazing cars, but I didn’t have the experience. I didn’t do a good job, but it taught me a lot of lessons like you never climb into a racecar and be conservative. You lay it all out on the line, and you don’t ever take anything for granted.

I’m glad I’ve had to work so hard at this. It was an interesting opportunity that taught me more than those guys will ever know and there’s not a day that goes by that I don’t think about it, think about why it didn’t work out, why I failed and what I needed to work on. It was a tough deal.

Albino: When you don’t live up to expectations like that, do you feel like it kind of hurt your career?

DiBenedetto: In that case, no. It’s possible, yes, but in my case, no. It taught me personally more than those guys will ever know. It’s the biggest life lesson, for me. I was very hard working and dedicated my whole life to get that opportunity, but I was very naïve and didn’t realize how tough it is at the professional level. It’s a lot different from a late model, and that was my prior experience to that. I was very naïve, not experienced enough, so it taught me how hard it is and how hard I was going to have to work to get to this level and how tough I was going to have to be mentally.

I had the driving ability. I had the speed, but that’s only a tiny portion of what you need to be a professional in NASCAR.

Albino: Do you know what next year looks like?

DiBenedetto: Not yet. We’re just head down digging, trying to make the most of what we have for right now. I’m very appreciative of what we have here. I did sign with those guys early last year because I’m proud of what we have been building. It’s a great group of people and I wanted to continue for us to keep building this deal together.

This sport is crazy right now and there is so much going on that I can’t even keep up with it. I’m probably a little bit out of touch with the rumor mill, just focusing on our team and try to be the best we can.

Albino: Is Go Fas a place you would like to build up if possible, or are there other opportunities you’d like to pursue?

DiBenedetto: I’m happy to have been a part of building this team. It definitely hasn’t been only me, it’s been all of us working together to build this. I’ve been proud of it and hope the team can continue to get bigger and better and who knows what the future of this sport holds and if smaller teams can benefit from it.

To answer your question, my end goal is to be winning races in the Cup Series. That’s what I’ve dreamed of since I was a kid. Do I know that’s going to happen? No. I think God only has the plan for that, so I just have to trust him in that. I just want to be as good as I can for any team that I’m at and be fully invested and be a big part of it.

Dustin joined the Frontstretch team at the beginning of the 2016 season. 2020 marks his sixth full-time season covering the sport that he grew up loving. His dream was to one day be a NASCAR journalist, thus why he attended Ithaca College (Class of 2018) to earn a journalism degree. Since the ripe age of four, he knew he wanted to be a storyteller.
@@DustinAlbino
Previous The Frontstretch 5: Great NASCAR Paint Schemes Past & Present
Next Frontstretch Podcast: Justin Haley Breaks Down Last Lap Mayhem in Canada