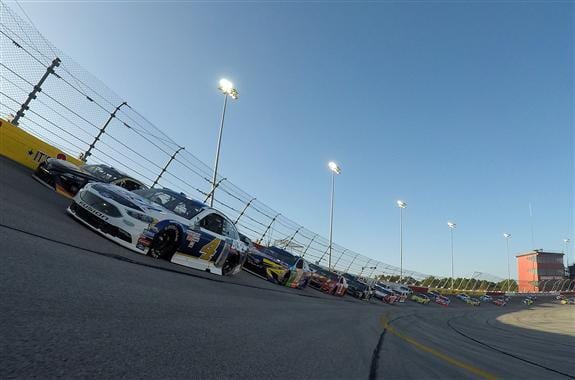 This week, the Monster Energy NASCAR Cup Series enjoyed its final off weekend of the season.

The Buddy Baker “Gray Ghost” paint scheme has set the bar. Dale Earnhardt Jr. was slated to run this paint scheme in 2016, but when he sat out the remainder of the season following the Kentucky race, Jeff Gordon was brought out of retirement to run it.

Both Matt Kenseth and Josh Wise have run the Ricky Craven Tide paint scheme from the 2003 season where he picked up the victory in the Southern 500. Both Wise and Kenseth ran great paint schemes, but Kenseth actually had Tide on the car as a sponsor.

This has been a personal favorite of mine. The scheme paid homage to one of the most successful paint schemes in history. Mark Martin piloted this paint scheme in 1998 and 1999 and it really blended in well with the new Ford body.

Throwin’ it back to the Whelen Modified Series, that “Tiger” Tom Baldwin paint scheme fit perfectly on a stock car. Modifieds are a huge part of NASCAR’s history and to throw it back to that era of history made so much sense, especially under the Tommy Baldwin Racing banner.

Greg Biffle and company went out that year and picked up Hooters as the sponsor for the Bojangles Southern 500. This brought about a lot of controversy as Tommy Baldwin Racing had already announced it would be running this scheme. The only issue was that Roush picked up the actual sponsor that was running when Kulwicki was piloting the No. 7.

Controversy or not, this car was an absolute beauty.

This paint scheme was a huge part of my childhood as two members of my family were Rusty Wallace fans when I was growing up. This paint scheme fits everything about Miller and continues to do so, as the company is a primary sponsor of Keselowski’s and has been for many years.

This has to be one of the best throwbacks to one of those guys in NASCAR who doesn’t get enough recognition. Geoff Bodine picked up Hendrick Motorsports’ first victory in the No. 5 car.

In my opinion, the paint scheme needs to match the car number that the original scheme was run with.

Bodine has a Hall Of Fame resume and using his HMS paint scheme as a throwback makes you literally want to go back to the time when Bodine was driving and sit in the stands and witness real racing again.

When this paint scheme was revealed, it brought back so many memories of watching Days of Thunder and the kind of racing NASCAR featured when this movie was made. The reason why this paint scheme overshadows Kyle Larson‘s is what it did for an underfunded team that often gets overlooked.

Smokey Yunick is one of those people who should be in the NASCAR Hall of Fame but will probably never make it, simply because of some situations that took place while he was alive and active in the sport.

With this throwback weekend, we can remember and recognize people who the sport would like to forget because they didn’t fit the mold that NASCAR wanted. Sadly, though, this scheme was run for two straight years and has become a predictable part of the weekend.

Germain Racing isn’t running the scheme this year, though, so that is a good thing.

Since Team Penske now holds the numbers 2, 12 & 22 maybe they should run all the paint schemes of (2)Rusty Wallace Miller Genuine Draft as they are this year. The 12 of Bobby Allison’s Miller High Life and his 22 Miller American Buick as well.

Remember when Bobby’s Hillin and Allison won both races at Talledega in the Stovola’s Miller American Buicks? Both cars are in the museum at the track as well.

I would also love to see the 83 of Lake Speed’s cars either the Wynns/KMart or Bullseye Olsmobile run. And yes I think the scheme should match the number it came from.

Some of these, especially for this year, seem to miss the idea of the throwback car. They should be throwbacks to epic cars that ran back in the day. The guys who run antique versions of their sponsors advertising campaigns just may as well not participate. This year’s 11 for example. Yes, Denny has a storied background in late models, but it doesn’t pay any respect the the greats that ran at Darlington. And why has the 48 never run Skinner’s paint scheme in the throwback race? You know, the guy who gave Lowe’s their first ever win? And Ditto to the Bobby Allison tribute! Penske should absolutely have all three of his cars running Bobby’s colors. I LOVE the Miller High Life scheme on the 00 this year, but unless he wrecks, we’ll never see it on the screen.