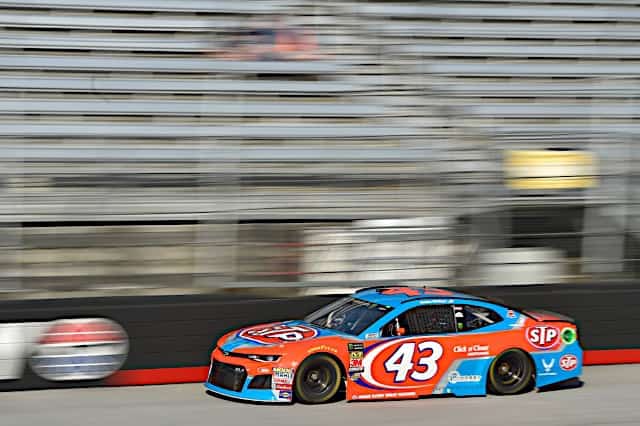 One of the original one race paint schemes, if not the first, was the silver Goodwrench Chevy that Dale Earnhardt ran in the 1995 Winston (or whatever the race might have been called back then.) Because Earnhardt always ran the familiar black Chevys, it was quite a surprise to see him in the silver car, and Action diecasts of the car quickly sold out and began trading at many times their original cost. That set off a diecast collectible frenzy that saw multiple new paint schemes in almost every race.

In that same era, Bill Elliott ran the black and green “Thunderbat,” also released in 1995 and in fact revealed before Dale’s silver car. The car was a tribute to the Batman Forever movie and the Thunderbirds Ford drivers in NASCAR ran at the time.

As hinted above, greed destroyed the die-cast aspect of the hobby. They’d claim that only 1000 diecast models on a certain car would be sold, but if they sold out (and I remember many a long morning sitting on hold with Action trying to get a model car before they sold out) they’d re-release it as a bank or with some slight difference at a substantially higher price. – Matt McLaughlin

My two favorite paint schemes follow a bit of a theme. Number one on my list is the 1976-1979 Wood Brothers Purolator Mercury driven by David Pearson. That car represents my childhood and how  NASCAR became my life. The cars varied a bit, but the basic scheme meant everything to me. Number two on my list is the “Captain America” paint scheme used on Raymond Williams’ No. 47 Jet Way Products Ford. Guess I’ve always been a sucker for cars done up in red, white, and blue. – Mark Howell

While I am too young to remember any paint schemes before 2007 I guess, I always thought that the pictures of the old Tide rides from the late 80s and 90s were cool. I feel like the huge Tide Logo and bright colors set guys like Darrell Waltrip and Ricky Rudd apart from every car on the racetrack. For other schemes that I grew up with, I really liked Matt Kenseth’s 2008 DeWalt car, the 2009-10 Red Bull Cars, and the Axalta/DuPont 2011-2013 cars. In terms of current schemes, my favorite scheme of the year has to the Xfinity scheme that Josh Bilicki ran at the July Daytona race with a simple American flag wrap that covered the whole car. I also like William Byron’s Axalta car and Clint Bowyer’s Rush Truck Centers Scheme. Also, Bubba Wallace’s STP and Medallion Bank schemes are very nostalgic. – Zach Gillespie

My favorite old paint scheme. I took the second photo about a million years ago. – Toni Montgomery

My all-time favorite scheme is the 1992-1995 No. 6 Roush Racing Valvoline Thunderbirds of Mark Martin. To me, this scheme is 1990s NASCAR, as it was during a time when I was old enough to fully understand, appreciate, and follow the sport. Photo was taken by former front tire changer Chris Hussey (@CTH16) during a test session in 1993, the year prior to the inaugural Brickyard 400. This is also the scheme and car that won four in a row in 1993, tying the modern record for consecutive wins, with the fourth being the Southern 500.

Of the current schemes, none really jump out at me as being as memorable. Most are wraps which completely kill the appearance, especially at night. That said, would have to give a nod the No. 43 RPM Camaros of Bubba Wallace; the Petty Blue and Day-Glo red STP and Medallion Bank schemes are hard to fault. – Vito Pugliese