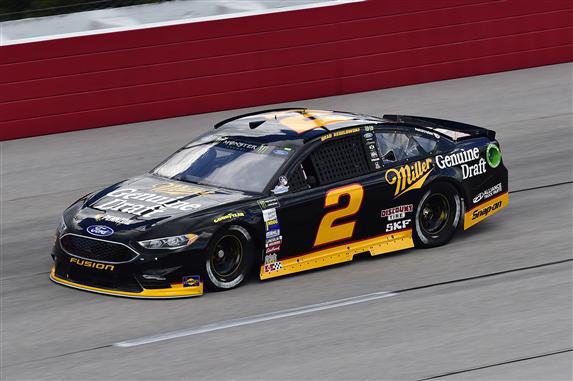 NASCAR is back at Darlington Raceway, and that can only mean one thing.

The Monster Energy NASCAR Cup Series and XFINITY Series take to the track this weekend at Darlington, and many of the teams entered will sport paint schemes that recall bygone eras of NASCAR. Some of those are recent; Jimmie Johnson, for instance, is tricking out his No. 48 in honor of his 2012 Southern 500 victory. Others go back to the earliest days of the sport.

Not everyone gets into the festivities — and some only field retro-themed throwbacks rather than ones specifically tied to something — but for those who are in 2018, we’ve got you covered with the rundown of Cup and XFINITY series throwbacks this year, with brief explanations of what’s being thrown back to. If they’re not listed here, a team is either not running a throwback scheme or hasn’t announced one at press time.

Honored as a fan, to have the opportunity to share the unveil for @jamiemcmurray's @McDonalds throwback paint scheme for @TooToughToTame. Fast forward from 50th Anniversary of @NASCAR (1998) to 50 Years of Big Mac #BigMac50 pic.twitter.com/DJL498PYi3

Throwback: Bill Elliott‘s No. 94 McDonald’s ride from 1998, when NASCAR celebrated its 50th anniversary. The team is using the paint scheme to denote the 50th birthday of the Big Mac.

Excited to C this awesome throwback ripping around @TooToughToTame w @keselowski behind the wheel next weekend pic.twitter.com/EFkN7iS5Lg

Throwback: Not yet announced but reportedly coming before the race.

Step right up and get your commemorative Stewart-Haas Racing #NASCARThrowback trading cards right here, folks! ? Who wishes they'd had these in their collection back in the day?

This good lookin' Ford Fusion will look great out on track at @TooToughToTame! ? BUT it would look even better in victory lane… don't you agree, #SHRFans? ? #SmithfieldRacing pic.twitter.com/qUMnmfDha9

Darlington this year for me is all about family. I’m going to share some stories each day leading up to #NASCARThrowback race weekend @TooToughToTame. The first is about buying and racing the Mini Stock. pic.twitter.com/ikxZUrLh8K

Got a question for @Blaney as he gets ready for #NASCARThrowback weekend at @TooToughToTame?

Tweet them to us and he could answer them live later today on Twitter at 2 PM ET! pic.twitter.com/ZASo1KD3GW

Who else can’t wait to see this beauty hit the track @TooToughToTame? ? https://t.co/284jPRltPs

Got some really cool news for you…..? pic.twitter.com/B7wlqMQ0d6

Throwing it back with my @SportClips #Camry to the #HighPlainsDrifter, @RickCarelli at Darlington Raceway. It’ll be cool to have Rick spotting a scheme that he once drove and meant so much to his career. pic.twitter.com/PprYGiOSo0

Throwback: Rick Carelli’s No. 6 in the Camping World Truck Series

Double race week! We're going racing Labor Day weekend with both @woodbrothers21 & @Tasca3. It's a Cale Yarborough throwback in #NASCAR, but looks like we have a surprise coming for #NHRA as well ? pic.twitter.com/iBkeyReZuE

Found some of my old hero cards that match up with the throwbacks this weekend. Check out the Steve Park Pennzoil one run by Joey Logano. #TBT pic.twitter.com/IDux3dkxvD

I'm excited to announce that I'll be pulling double duty again this weekend at @TooToughToTame!

I can't thank @SparksEnergyInc, @AgriSupply, and @1eternalfan enough for coming on board for both our XFINITY and our Cup rides this weekend!!

We’re getting colorful this week for #WallpaperWednesday!

Save, set, screenshot and show us those screens. ? pic.twitter.com/oH255l2aFo

One of the most special race weekends of my career coming up this week getting to run my childhood favorite driver @JeffBurton’s Exide Batteries scheme for throwback weekend at @TooToughToTame! So thankful to @keenparts and my team for allowing me to do this! pic.twitter.com/erLBBNwLdM

"Darlington is such a cool racetrack. When you go there, it just feels like you take a step back in time … Love's Travel Stops gets into it, too, with their throwback scheme going back to the look of their first travel stop.“
–@Mc_Driver pic.twitter.com/bQgpu1EUSJ

Well… isn't that one sharp lookin' Ford Fusion? ? Tap the ❤️ if you think this #NASCARThrowback scheme would look great in victory lane.#SHRacing10Yrs pic.twitter.com/J78T5bcgTD

Hey @Blake_42, does this look familiar?

Anyone remember this scheme run by Robert Presley and Stacy Compton? pic.twitter.com/odYszwfrKK

Throwback: Robert Pressley and Stacy Compton’s ST Motorsports No. 59 in the XFINITY Series

Our Darrell Waltrip throwback for Sunday’s #Southern500 finally has it’s colors! A huge thanks to @Rewardsdotcom for being so willing to make this happen! @AllWaltrip pic.twitter.com/NZQAtsSdic

It’s Big Rand’s bday so I figured we should pull the pin tonight. My first racetrack memories as a kid were when Dad was wheeling this hot rod. I can not wait to wheel this thing @TooToughToTame . pic.twitter.com/aZJnLPqEYF

Our No.95 @DumontJets throwback beauty for this weekend @TooToughToTame is ready to be loaded up and head south. It’s been fun to bring back @kaseykahne’s “flying 9” aboard our Camaro ZL1 for the second time this season. #Team95 #ThrowbackWeekend pic.twitter.com/yavwQJxPJM

Throwback: Kahne’s No. 9 for Evernham Motorsports, 2006

We are on the final round of voting!

Excited to reveal the No. 2 @RCRacing #NASCARThrowback Chevrolet will be honoring longtime friend of RCR and Dale Sr., Dave Marcis! @NASCAR may not let us race in wingtip shoes anymore like he did, but I hope to make him proud at Darlington Raceway this weekend! pic.twitter.com/mXboVNRYLc

@tydillon and the Daniel Defense No. 3 Chevy are back this weekend at Darlington Raceway! Tune in on Saturday, September 1 at 3:30 p.m. EST as we hit the asphalt one more time with @RCRracing! pic.twitter.com/dt52KJRAkX

Ready to rock the 4 car this weekend at @TooToughToTame. Little bit different but looking forward to one of my favorite and coolest tracks on the schedule! Gotta thank @sclottery for the support, and honored to be able to run a James Hylton throwback number. #NotNuthinBut4 pic.twitter.com/afK1DEtzax

Throwback: Michael Waltrip’s No. 15, not yet revealed

Here is a look at our @AllWaltrip throwback paint scheme for @TooToughToTame It looks like Darrell's No. 11 car. It's our No. 19 @Hope4Warriors Toyota. I can't wait to see it on the track! @jayski @JoeGibbsRacing @ToyotaRacing #nascar @Xfinity pic.twitter.com/itaIe5tjpm

Our @rheem @ToyotaRacing #Camry looks good for this weekend! Can’t wait to get to @TooToughToTame! pic.twitter.com/7Ci3JAiqwV

For those of you that have asked what scheme @chaseelliott will be running for us this weekend ??

In honor of Davey Allison’s 1985 No. 23 Miller American Buick pic.twitter.com/E4XdfgdyH2

I cannot wait to get out on the track this weekend & show this baby off in the @XfinityRacing Sports Clips Haircuts VFW 200! @AgriSupply @sparksenergyinc @1eternalfan pic.twitter.com/HHUmrZkQJP

Love how this beast turned out! Here's our #NASCARThrowback for @TooToughToTame!! Neat piece of @FordPerformance and Roush Racing history. And don't forget to checkout https://t.co/JYV7AcWogX pic.twitter.com/K7faizIkB4

What happens when you combine our colors with the design scheme Dick Trickle used to capture 1989 NASCAR rookie of the year honors?

Those are some good lookin' Fords! ?Which is your favorite #NASCARThrowback scheme, #SHRFans? Let us know by replying to this tweet with the emoji of your favorite SHR throwback car. ? pic.twitter.com/7tiRCEcgET

Throwback: The car will feature the name of short track driver Charlie Blanton, who ran three Cup races in the 1970s. Not yet revealed.

Got some sick trading cards with the Mullet and Stache ? pic.twitter.com/JXjwOl88LV

Throwback: Cassill’s No. 01 when he once drove full-time for JD Motorsports in the mid-2010s. Not yet revealed.