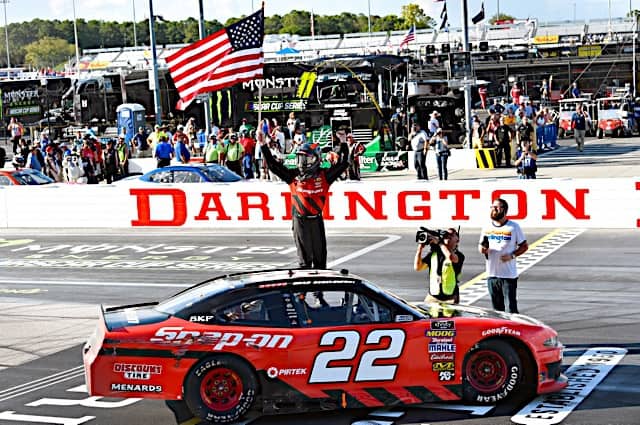 Brad Keselowski can mark another track off of his checklist.

The former NASCAR XFINITY Series champion won the Sport Clips Haircuts VFW 200 at Darlington Raceway on Saturday evening (Sept. 1) for his first win at the Track Too Tough To Tame.

Keselowski had only led two laps until he took the top spot with 33 laps remaining after Kevin Harvick and Ross Chastain wrecked each other racing for the lead.

“Just got through there… I don’t know how much I missed it by, but it couldn’t have been much,” Keselowski said. “We had a good little battle going there between the three of us… Kevin [Harvick] was going for it, and Ross [Chastain] was going for it, and it all came together there. You could kind of see it coming.”

The 2012 Monster Energy NASCAR Cup Series champion held off Cole Custer on the final restart to cruise to the win.

The win was Keselowski’s 39th and his first at Darlington in any series.

“It means a lot to me [to win at Darlington],” Keselowski said.

The Rochester Hills, Michigan native said the next track he needs to check off his list is Sonoma Raceway.

Keselowski brings home the checkered flag, but the race was Chastain’s to lose. Chastain, who has impressed all season in JD Motorsports’ No. 4, drove in the first of three races with Chip Ganassi Racing.

Chastain took off from the start, winning the first two stages and leading 90 laps before the incident with Harvick. He was challenged by Christopher Bell on a lap 10 restart, but held his own and cleared the No. 20 off of Turn 2. Bell stayed with Chastain but didn’t have anything for Chastain, who cruised to win stage one.

Chastain led more laps in the first stage than his previous 129 XFINITY races combined. Being up front was clearly a new experience for Chastain, as his crew chief and spotter were coaching him throughout the early portion of the race on things that the leader deals with, such as leading the pack down pit road.

Harvick emerged as a contender at the start of the second stage. The 2014 Monster Energy NASCAR Cup Series champion spent the first stage moving from seventh to third and moved up to second on the first pit stop.

Chastain beat Keselowski at the start of the final stage, but Keselowski and Harvick hung with him. Keselowski tried the pass on the inside on several occasions, but couldn’t get alongside Chastain.

With 44 to go, Keselowski dove to the inside and pulled a slide job on Chastain, but slid up into the wall. Chastain backed up his entry while Keselowski was doing this and pulled a crossover to take the lead right back at corner’s exit.

“You hated to race that hard, but the race was on the line and it was the last stage,” Keselowski said.

Harvick tried to get around Chastain on lap 108. Harvick got to his inside as Chastain was passing the lapped car of Timmy Hill. The trio went three-wide through the turn, causing Harvick to get loose and rode Chastain into the wall. After Chastain bounced off the wall, he moved his No. 42 machine down the track to spin out Harvick, sending the No. 98 into the wall.

The incident heavily damaged Chastain’s and ended Harvick’s, but not before the veteran driver stopped in Chastain’s pit box to show his displeasure.

“So, you’ve got a really inexperienced guy in a really fast car and made a really bad move, and then wrecked me down the back straightaway and hooked me to the right,” Harvick said after the incident. “That’s probably the reason that he’ll never get to drive many of them again.”

“I’ve never been in that situation, and I trust the guys I race around to give me a car-width, and we just ran out of room,” Chastain said.

This left Keselowski in the lead, and the No. 22 cruised to the win after holding off Cole Custer on the final restart.

Maybe the A-listers should just stay out of the Infinity and let those guys put on their own show.

And Kevin is my new official D- bag.

I thought Harvick pulled a Busch league move on Ross. In his interview he seemed to play the “Doesn’t he know who I am?” card and blamed Ross for not moving over for him. The drivers are taking “race” out of the “race”! Looks like Harvick is getting a worse case of the affluenza disease.

Careful Don. You might get” Another View” from somebody “Smarter than Us”.

Bell is in the 20, unless you’re writing about Hamlin in the 18.