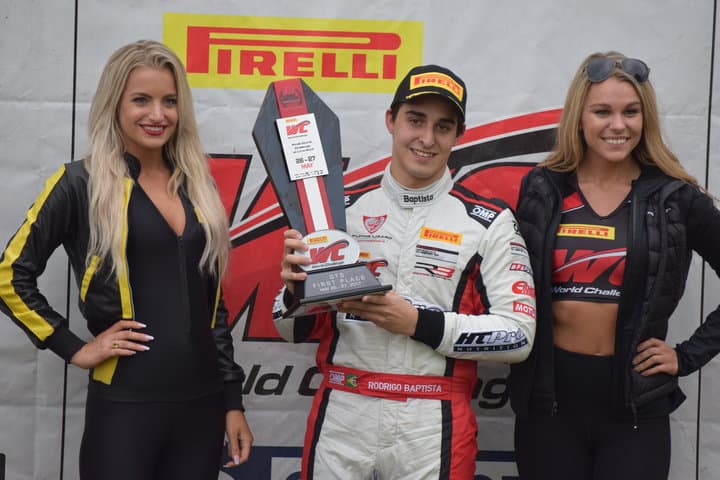 “No, I don’t think so,” Baptista said after the race when asked if he’d ever had a car as good as his Bentley Continental GT3 was Sunday.  “The car was perfect.”

Baptista led the field to green, but trouble was not far away.  In Turn 1, TR3 Racing’s Daniel Mancinelli and Mario Farnbacher in the RealTime Racing/HART Acura collided and spun.  CRP Racing’s Michael Cooper could not avoid the incident and got wrapped up in it.

Cooper was out on the spot.  Mancinelli was able to drive his Ferrari 488 GT3 back to the pits, but the damage was too severe to continue.  Afterwards, Mancinelli claimed that he was hit was on the inside and that pushed him into Farnbacher.  While it appeared that there was slight contact from Àlvaro Parente, that likely didn’t play a role in the crash.

Once the green came back out, Baptista ran away with the show, turning in laps up to one full second faster than the rest of the field at times.  Behind him, PFAFF Motorsports’ Scott Hargrove and Parente had a race-long duel for second.  Parente appeared to be faster, but Hargrove did everything in his power to defend his position.  That included defensive lines in the passing zones, forcing Parente to the outside.  As a result, Parente was never able to get past.

Hargrove ran Parente hard because he had a title to win.  The second-place finish was good enough to give Hargrove the GT Sprint championship.  Parente was third, followed by R. Ferri Motorsport’s Toni Vilander and Alegra Motorsports’ Michael Christensen.  Vilander’s performance on Saturday was good enough to clinch the GT Overall (Sprint and SprintX).  He tried to claim the GT Sprint championship as well, but came up short.

GTA saw DXDT Racing’s David Askew get in front of Anthony Imperato on the first lap and hold off the Wright Motorsports Porsche for much of the race.  Askew was able to maintain the advantage until he spun out on his own in Turn 7 on Lap 18.  That allowed Imperato to take the lead and claim an easy win.