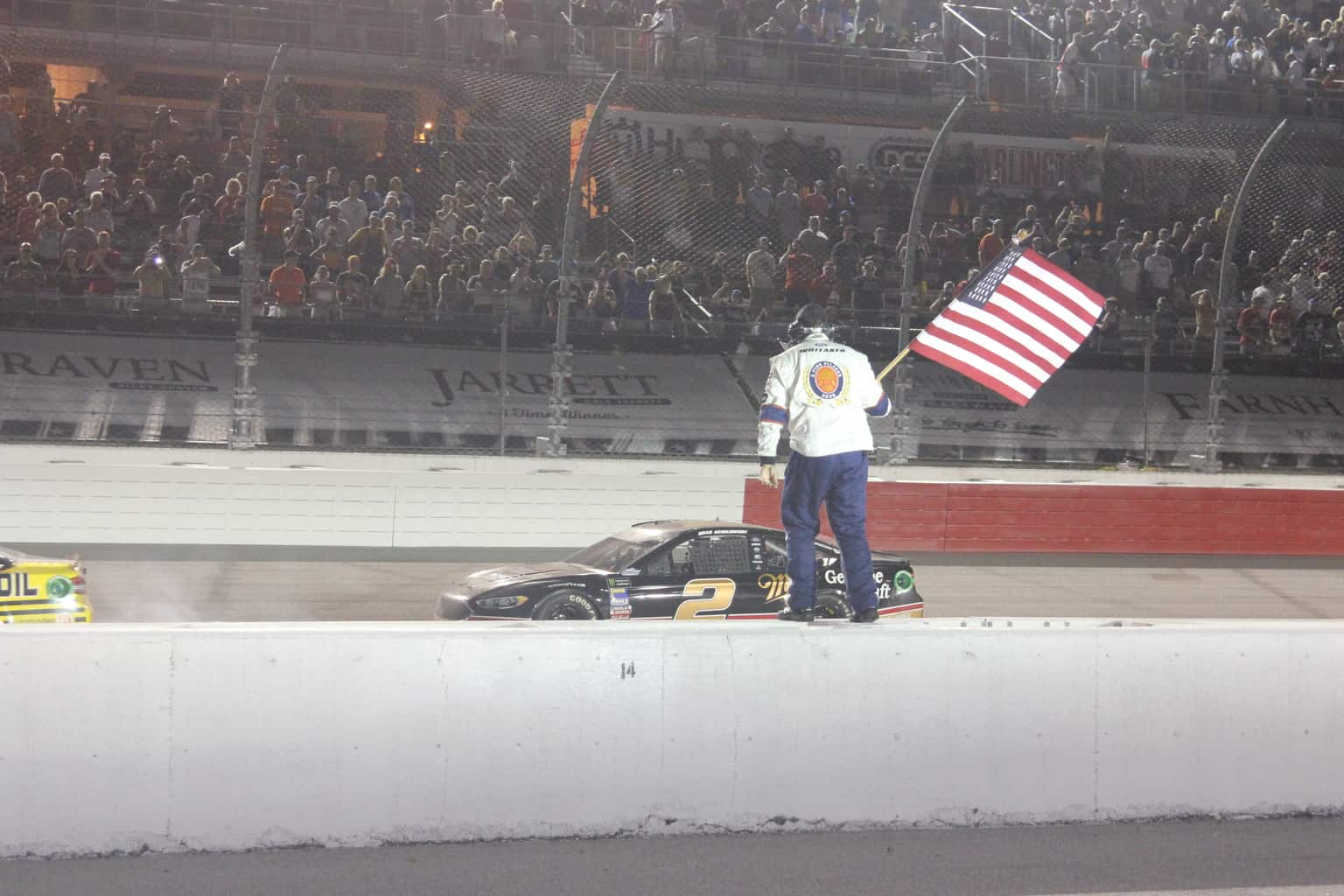 While he wasn’t the dominant driver of the evening, Brad Keselowski took advantage of a strong pit stop that put him in the top spot and ran away from the field to claim his first victory at Darlington Raceway. It was the first win for Team Penske at Darlington since Bobby Allison swept both races in 1975. Kyle Larson was the dominant driver of the race, leading 284 of the 367 laps, winning the first two stages but ultimately came home in third. Darrell Wallace Jr. finished 26th, which was enough to claim the Rookie of the Race.

Denny Hamlin was the fastest car in qualifying and led the first 11 laps when the green flag flew. Larson took the lead on lap 12 for the first of two on-track passes for the lead. Larson led for 118 laps, through the end of the first stage and until the first caution of the race for contact between Kyle Busch and Joey Gase. After the caution for their entanglement, Martin Truex Jr. led and held onto the top spot for 30 circuits before Larson got around him for the second on-track pass for the lead. Larson led the remainder of stage two through an uneventful first 200 laps of the race.

Larson continued to lead the race until green flag pit stops. He surrendered the lead to Keselowski for two laps who then handed it over to his teammate Joey Logano. Logano led for 18 laps before pitting and allowing Larson to take the lead for his third and final time of the race. Larson led through a caution on lap 313 that fell during green flag stops that found only three cars on the lead lap. That caution waved over an incident that saw Clint Bowyer attempt to pass a slow car only to find Ryan Newman slowing to attempt to enter pit road. The contact destroyed Bowyer’s car and also severely damaged Newman’s and imparted minor damage on Jeffrey Earnhardt’s.

Larson led until the final caution of the night flew for a spinning Earnhardt. As the cars exited pit road Keselowski beat Larson out by less than a foot, ultimately gaining the lead and control over the final restart.

Even on pit road, we’re three wide!@keselowski is the leader off of pit road. #NASCARThrowback pic.twitter.com/aYoGOK8Mwy

There were five leaders who exchanged the lead seven times, but only two of them were on-track passes for the lead. After Larson, Truex led the second most laps with 30. Keselowski led twice for 24, including the last 22 laps.

While Keselowski was already set to run in the playoffs, having a victory and continuing his streak of seasons with a win gives his team confidence heading into the run for the championship. The opposite is true for Hendrick Motorsports, which ran poorly all weekend outside of Chase Elliott and had two of its four teams (Jimmie Johnson and William Byron) suffer engine failures. Larson, even though he finished third, said that the car he had this weekend was better than any of the cars he’s won races with. The playoffs are all but set, the favorites are still up in the air.

The folks at Richard Petty Motorsports unveiled its throwback scheme at the NASCAR Hall of Fame and it was all Petty Blue. The folks at STP had other ideas and ultimately decided to do the same thing they had done in 1972. After a meeting in Chicago with STP promoter Andy Granatelli, the Pettys agreed to put da-glo red on their race cars. The car was already in Riverside for what was then the season opening race. By the time it got to Daytona it had the STP red on the car along with the Petty blue. Sunday at Darlington the same thing happened. The RPM team pulled off the all blue wrap to reveal the actual scheme.

Kurt Busch told the assembled media on Friday that he has two offers on the table for the 2019 season. Busch said he’ll let people know what his plans are as things get closer. Stewart-Haas Racing was kind enough to let him be a free agent and test the market. He does have the support of Monster Energy in this search. While that doesn’t mean he’ll have them as a sponsor it looks like that could be a possibility.

The future of Roush Fenway Racing’s iconic No. 6 is up in the air for 2019. It appears Trevor Bayne will not be back to pilot the ride but it is uncertain if Matt Kenseth will have an offer either. It would be hard to imagine NASCAR without the storied No. 6 on the track.

Lucas Oil Raceway, one of the premier motorsport facilities in America, is undergoing a facelift. The property acquired an economic development grant to build a pavilion for hospitality during racing events. It also acquired another 75 acres of land that will be used to expand the facility. Now that the pavilion is complete, the racing operations are going to be upgraded. The drag strip is first but the oval is also expected to undergo improvement. That will include work on seating and, hopefully, garages. The ultimate goal with the oval is to have NASCAR come back along with other stock car racing organizations.

Rockingham Properties LLC, a group of investors from Raleigh, led by Dan Lovenheim, have purchased Rockingham Speedway. They have a “remarkably encompassing” plan in place, although they did not reveal those plans. The tax value on the property is just below $3 million, down from the nearly $7 million the last time the property was up for sale. The loss of some structures and the lack of use of the facility has accounted for that drop.

Bowyer is really mad. While it was certainly in the heat of the moment, Bowyer lambasted back marker cars.

“I hit the 31 really hard. There are lapped cars that are 50 laps down all over the damn place. That’s pretty frustrating. I’m about tired of it,” he said after emerging from the infield care center. “This track is too narrow for cars that are that far off of the pace. You’re in and out of those guys, diving all over the place, trying to navigate around them, trying to figure out where the hell they’re going, and then you come up on somebody trying to actually compete in the race.

“I’m obviously pissed off and frustrated, but it seems to be that way for me every time I come here. We run decent. We had a frustrating night, just mistake after mistake and obviously, we ended up wrecked.”

Johnson was hoping to take steps in the right direction for a run at a championship. Unfortunately, he had to start at the rear of the field for unapproved adjustments after hitting the wall in qualifying. He then had a pit road violation that moved him to the back again when he missed the commitment line making a green-flag pit stop for a loose wheel. That was followed by an engine failure that resulted in a 39th-place finish. While Johnson is 19 points ahead of Alex Bowman and the odds appear to be strongly in his favor for making the playoffs, anything could happen. Either way, he was hoping for a momentum swing in the right direction but it has been anything but.

After quite a few appearances in the mad section, Jamie McMurray is in the happy section for once. After an incident in practice that resulted in an engine swap, McMurray turned in a strong performance that netted him a ninth-place finish. He also grabbed a couple stage points when he ended stage two in ninth. McMurray has obviously been a part of rumors about potential driver moves in the off-season. No one but McMurray and his people knows his level of interest in continuing with stock car racing. One thing is for sure: strong runs will go a long way toward securing another ride for him if he wants one.

Sometimes drivers luck into a finish that makes them happy. Chris Buescher was not in that situation Sunday night. Buescher ran in the top 15 for almost the entire race and ultimately came home in the 13th position. Buescher has been embroiled in the off-season seat movement rumors as well but he just wants to drive race cars for a living. Whatever the future holds, Buescher has talent and should be able to find a ride relatively easily.

Brad Keselowski scored the 25th victory of his career in his 330th start in the 69th Southern 500.

This is Keselowski’s first triumph at the famed egg-shaped oval.

For 2018 this is Keselowski’s first win of the season.

25 wins rank him in a tie with Jim Paschal and Joe Weatherly for 31st on the all-time wins list.

Joey Logano came home in the runner-up spot at Darlington.

This is Logano’s best career finish at Darlington.

For the season Logano has come home in the top two twice.

On the all-time runner-up list Logano ranks 67th with Greg Biffle and Jeremy Mayfield with 10 each.

Rounding out the podium was Kyle Larson.

This is Larson’s second third-place finish at Darlington in five tries.

The top three run was Larson’s seventh of the season.

For his career Larson has come home on the podium 34 times which ranks him 63rd.

For the year, Wallace has 10 Rookie of the Race honors while William Byron has landed the award 15 times.

Austin Dillon, Kevin Harvick, Martin Truex Jr., Clint Bowyer, Kyle Busch, Joey Logano, Erik Jones, Chase Elliott, Kurt Busch, and Brad Keselowski are the ten race winners in 25 races of 2018. At this point it is impossible for there to be more than 16 unique winners in the regular season, so all winners are locked into the playoffs based on winning a race, assuming they attempt the remaining races in the regular season. Thanks to their accumulated points and the maximum points available over the final races, Ryan Blaney, Kyle Larson, Denny Hamlin and Aric Almirola are also locked into the playoffs. The drivers who would qualify for the playoffs and their associated playoff points (race winners are bolded):

The throwback weekend at Darlington is one of the most anticipated races of the season. Despite all of the hype and excitement, the race was a huge letdown. Larson was the only driver able to chase down a leader and pass them under green flag conditions. Even in the field the amount of passing was limited after the first 50 laps. The end result is a poor ranking for this race. We’ll give it two lukewarm Five Points IPAs from Southern Hops Brewing Company in Florence, SC.

Next week is the annual visit by NASCAR to the Racing Capital of the World. The coverage from the Brickyard begins at 2 p.m. ET Sunday, Sept. 9. The action can be seen on NBCSN and streamed on the NBC Sports app. If you’d like to listen to the race it can be heard on the Indianapolis Motor Speedway Radio Network.