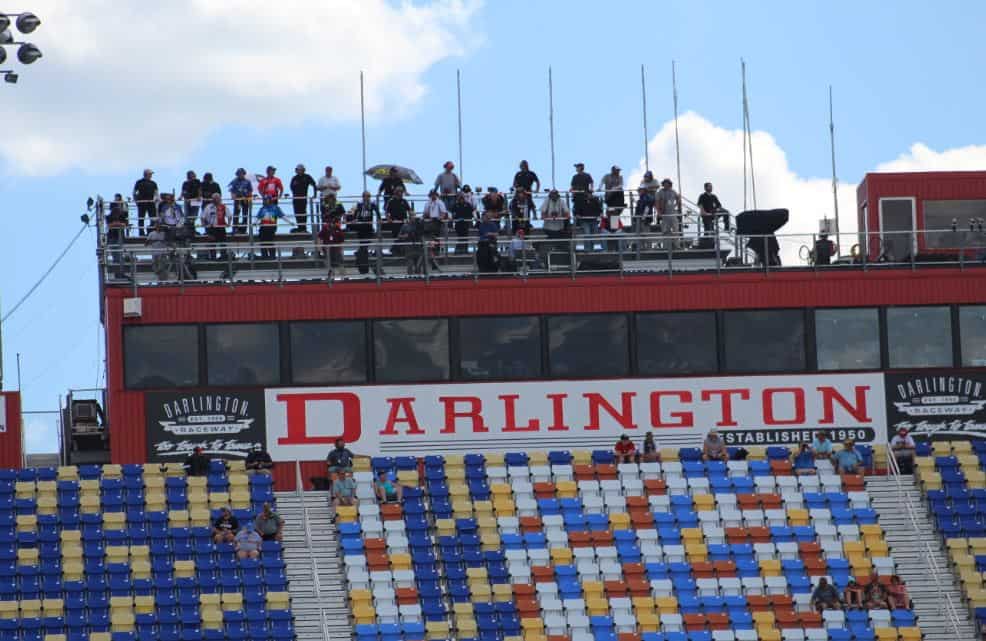 Darlington Raceway has been turning NASCAR drivers into legends for nearly 70 years.  Winning at the notoriously difficult track that is “Too Tough to Tame” often puts an exclamation mark on the careers of some of NASCAR’s brightest stars.

It is almost unthinkable that David Pearson visited Darlington’s Victory Lane 10 times.  Dale Earnhardt had the magic touch at Darlington as well, winning nine races there.  Jeff Gordon’s four Southern 500 victories in a row during the 1990s remains one of the biggest indicators of his dominance at that time.  It is no secret that Pearson, Earnhardt and Gordon were some of NASCAR’s greatest talents, but their accomplishments at Darlington are the kind that really makes you pause and appreciate what great drivers they were.

But before Pearson, Earnhardt, and Gordon, there was Darlington’s original dominator, Herb Thomas.  His run of success at Darlington came in NASCAR’s formative seasons in the 1950s, when the Southern 500 was the biggest prize to win.  With Thomas, it is not about the number of races he won at Darlington, but how he won them, and the standard of excellence which he set that future drivers took decades to beat.

Thomas’ name might not be familiar to a lot of newer fans.  His story tends to get lost amid the colorful tales and more outlandish exploits of drivers like Curtis Turner and Tim and Fonty Flock.  Thomas was a more reserved presence on the Grand National tour, but one who did quite well for himself in a relatively short career.  In addition to winning championships in 1951 and 1953, Thomas earned 48 victories in 229 starts.  Many of those wins came in cars prepared by the legendary mechanic Smokey Yunick.

While he had plenty of success on the short tracks that made up the bulk of the schedule at the time, Thomas’ record at Darlington was unique.  Thomas took on the Lady in Black seven times, including six Southern 500s.  In those seven attempts, he won three times: the Southern 500s in 1951, 1954, and 1955.  It would take another five years after Thomas’ third victory before anyone else won more than once at Darlington.

Winning at Darlington has never been easy, and Thomas faced tough conditions on his way to victory.  In 1951, 82 cars took the green flag in the Southern 500, the largest starting field ever for a race in NASCAR’s top division.  Thomas dominated the event, leading 311 of 400 laps on his way to victory.  Considering Thomas reached the finish line after six and a half hours of racing, it had to have been an absolutely grueling affair.

Three years later, Thomas started mid-pack in a field of 50 and methodically worked his way to the front.  He and Turner traded the lead seven times in the last two-thirds of the race, with Thomas making the decisive pass with 20 laps to go.  It would mark the 11th of 12 wins in the 1954 season for Thomas.

As impressive as those victories were, Thomas’ third Southern 500 win is probably the crowning achievement of his career.  In 1955, Chevrolet was just beginning to offer direct support to NASCAR teams.  With Hudson’s efforts in decline, Chevy executives convinced Yunick to field one of their cars in the Southern 500, with Thomas as the driver.  Both Thomas and Yunick switched to running General Motors products early in the season but ran into trouble during a race at Charlotte Speedway on May 1.

On lap 42, Thomas suffered a harrowing crash.  His car flipped several times, leading to Thomas himself getting ejected from the vehicle.  The incident left Thomas with a broken leg, a concussion, arm and shoulder injuries, and serious bruises.  The injuries caused him to miss months of racing.

Nevertheless, Thomas vowed to not only be ready to go by the Southern 500 but to win the race.  To most people, Thomas’ prediction must have sounded absolutely preposterous.  Nobody was sure that he would be healthy enough to contend for the win, or even able to run the race at all.  The Chevy teams were also struggling to keep up with the Chryslers fielded by team owner Carl Kiekhaefer.  Even with the expertise of Yunick, it looked like Thomas was facing a huge challenge.

By early August, Thomas was not only racing again but winning.  In just his third start since returning to the car, he scored a victory at Raleigh Speedway.  Seemingly none the worse for wear, Thomas, Yunick, and the Chevrolet contingent set their sights on Darlington, determined to beat Kiekhaefer’s Chryslers.  Qualifying went okay for Thomas and the No. 92 team, which placed eighth between Tim Flock in sixth and Fonty Flock in 11th, who were racing for Kiekhaefer.  The fastest cars initially turned out to be the Buicks of polesitter Fireball Roberts and second place starter Buck Baker.

On race day, 69 cars took the green flag.  Roberts led the opening laps, but the Flock brothers came to the front quickly, with Tim leading a handful of laps before Fonty checked out with the lead.

Meanwhile, Darlington began to take its toll on man and machine.  Roberts blew a tire and crashed, taking him out of contention.  Turner and Joe Weatherly, racing as Ford teammates for the day, became the biggest challengers to the Flocks.  Turner dropped out of the race with a broken tie rod, but Weatherly snatched the lead on lap 150 and dominated the middle stages of the race.  Tim Flock and Thomas kept up the chase, but Fonty’s day ended with a crash just past the halfway mark.

Thomas took the lead for the first time on lap 279 and held the top spot for most of the remaining circuits.  A late pit stop put him behind Weatherly again, but a tire failure while leading with less than 50 laps to go ended Weatherly’s run.  After nearly five and a half hours, Thomas cruised to his 43rd career victory and the second ever Grand National win for Chevy.

Thomas’ third Southern 500 victory capped off a remarkable comeback from his Charlotte injuries.  Unfortunately, his injury problems were not over.  Late in the 1956 season, Thomas had another horrific crash, this time at a half-mile track in Shelby, North Carolina.  The circumstances of the crash remain controversial to this day.  Thomas was racing against Baker for the championship, who had moved to Kiekhaefer’s team, and it was Kiekhaefer’s other driver who had triggered the accident that took out Thomas.  While the crash did not technically end Thomas’ career, it quickly accelerated his retirement.  He would run only two more races in 1957 and one final race at North Wilkesboro Speedway in 1962 before hanging up his helmet for good.

Yet Thomas’ standard of excellence at Darlington would last far beyond his driving career.  In 1964, Baker tied Thomas’ record of three Southern 500 wins.  That win, however, turned out to be the final victory of Baker’s career.  He and Thomas would hold the record jointly for over ten more years.

It took the combined efforts of Bobby Allison and Cale Yarborough to break Thomas’ and Baker’s Darlington records.   Yarborough captured his record-tying third Southern 500 in 1974.  A year later, Allison swept both of Darlington’s 500-mile events, giving him three Southern 500 wins and four wins at Darlington in 500-mile races.  Yarbrough collected his fourth Southern 500 win in 1978, officially taking the Southern 500-win record for himself.

The return of the Southern 500 to Labor Day weekend has reenergized the event.  It has become a time to reflect on the sport’s history and celebrate the fantastic feats of NASCAR’s legends.  Darlington has long been a place for titans of the sport to make their mark.  But nobody set the standard of how to dance with the Lady in Black like Herb Thomas did.