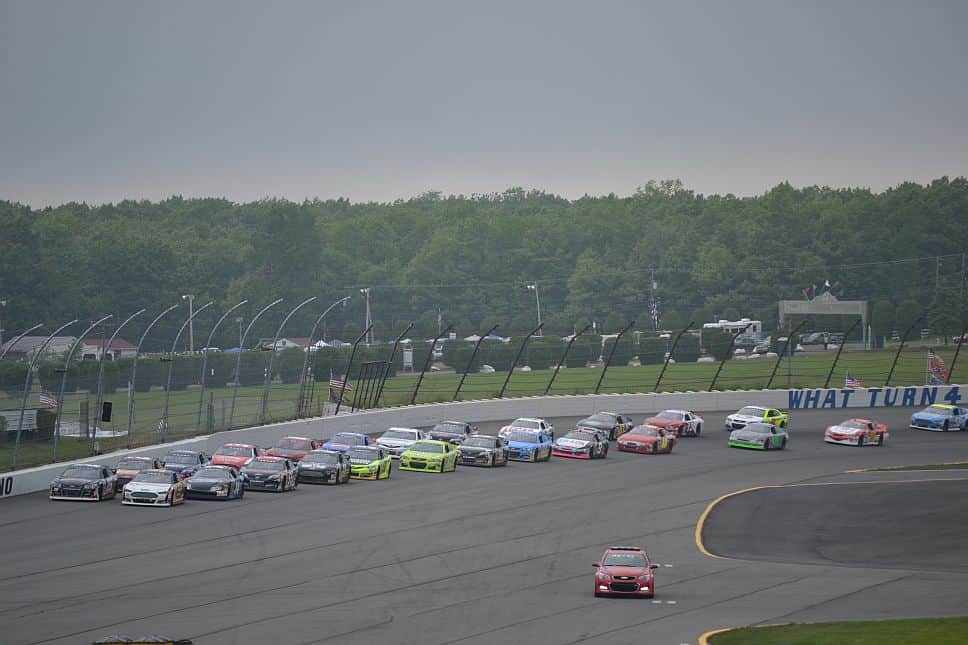 Just like Springfield, a dirt ringer in the Venturini Motorsports camp used a late race restart to take control for good en route to the checkered flag. This Monday, USAC standout Logan Seavey stormed to the front and weathered several late restarts, including one that saw Will Kimmel actually jump the start before yielding the lead back to Seavey, to win the General Tire Grabber 100, his first win in two career ARCA starts. Kimmel, Riley Herbst, Springfield winner Christian Eckes and Zane Smith rounded out the top five.

While the race up front was largely quiet during the second half of the event, there was plenty of attrition among the ARCA regulars, with points leader Sheldon Creed, Natalie Decker, Chase Purdy, Joe Graf Jr and Gus Dean all involved in spins and incidents on track. When the dust settled, Creed maintained a points lead of 210 markers over Zane Smith. Only 13 cars were running at the finish.

It’s been a dominant year for MDM Motorsports, but ARCA long timers Venturini Motorsports saw their dirt ringers sweep the season’s races. Christian Eckes, who came out of left field two weeks ago at Springfield to win the Allen Crowe Memorial 100, had another strong day at DuQuoin, even fending off contact from Ryan Unzicker late in the race to finish fourth, scoring his career-best fifth top-five finish of 2018. The headliner though was race winner Logan Seavey. Seavey maintained his lead through four restarts in the second half of Monday’s race, and also maintained the gap to the field in the late going with an overheating engine that the driver said was losing power during his victory lane interview. It’s unclear at this point how much more stock car racing Seavey will be doing in the near future, now that ARCA and NASCAR’s big three series are done with dirt for 2018, but any opportunities he gets will be well-deserved given his performance this summer.

Will Kimmel and the No. 69 team lived up to the Kimmel name for the first time this season with a strong runner-up finish at DuQuoin, the first top five for both driver and team since Talladega in the spring of 2016. The team, which missed the Springfield race after suffering mechanical issues in practice, ended up using the engine they’d been saving for the upcoming Fall Classic at Salem to ensure they could race at DuQuoin, and the end result was a career-best for Kimmel (his third career runner-up finish).

It didn’t translate to a huge gain in the point standings, but Zane Smith and the No. 41 crew deserve a pat on the back for a hard day’s work. After falling out of the Springfield race with overheating issues, Smith again experienced trouble with the temperature under the hood of his race car throughout the event Monday, in part due to two instances where the driver got out of the racing groove and drove through heavy dust to resume racing. The No. 41 crew pitted multiple times to add water to the car, and never lost a lap doing so. Their persistence resulted in a much-needed top-five finish. And while the driving part of Monday’s effort wasn’t the strongest for Smith, it did allow him to clinch the Four Crown championship within the 2018 ARCA schedule. Lastly, and it was inconclusive from the replays shown during the broadcast, if Smith, in fact, dumped Joe Graf Jr. as retaliation from last week’s race at Berlin, it was retaliation done right…early enough in the race not to affect the outcome, and not involving other competitors. Given the way Graf won last Saturday night at Berlin, Smith certainly owed him one.

Gus Dean’s 2018 dirt campaign finished on a non-stop downward slide ever since taking the pole for the Springfield race two weeks ago. Dean’s qualifying effort this weekend was nowhere near as flashy as his pole-winning run, and Dean was a non-factor in Monday’s race before spinning nose-first into the backstretch wall inside of 25 laps from the start. Dean finished outside the top 15.

Natalie Decker didn’t slow the field as much as Bryan Dauzat did at Springfield a few weeks back, but her run on Monday was a definite step back from the first dirt race of the season. Decker spun out three times over the course of Monday’s 100-miler and finished outside the top 10, the only Venturini Motorsports entry to do so.

Illinois’ dirt ringers both spun themselves out of contention over the course of Monday’s race. Kelly Kovski, again with Truck Series regular Grant Enfinger calling his race as crew chief, managed to work his way into the top three before spinning into oncoming on the exit of Turn 2 on lap 76. The field, fortunately, missed Kovski, who spent the remainder of the event scrapping in the back of the top 10 (he finished seventh). That opened a door for Ryan Unzicker, who restarted second after a lap 83 caution, but came down across the nose of Christian Eckes and spun himself out in Turn 2. Unzicker finished sixth.

Sheldon Creed for the second dirt race in a row faded down the stretch, losing a shot at a top-five finish with a spin on lap 97. Creed finished 10th, and as a result of the spin allowed teammate Zane Smith to gain points on the overall championship lead.

Driving for the Fikes, one would expect Travis Braden to show some chops on a dirt track, and he did just that on Monday, leading 17 laps the mid-section of Monday’s race and showing strong in the top five. Up until lap 67 that is. Entering Turn 1, Braden was hooked by an out-of-control Chase Purdy, with the No. 27 car slamming rear-end first at high speed into the Turn 1 retaining wall. Despite the heavy impact, Braden climbed from his car and walked away under his own power. The resulting 15th place finish snapped a seven-race top 10 streak for Braden, and leaves the No. 27 team with a demolished race car to deal with during a tight stretch of schedule that has the ARCA Racing Series tackling Lucas Oil Raceway four days from now.