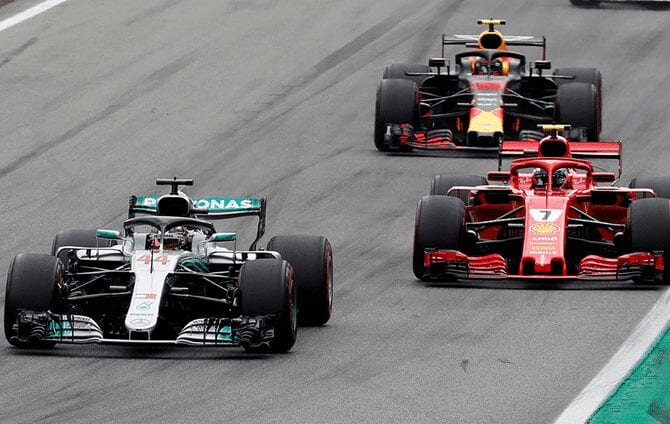 While the Monster Energy NASCAR Cup Series crowd was juiced this weekend for the retro paint schemes and the visit to Darlington Raceway, Formula 1 held one of its more intriguing races of the season at a mecca of speed. The Italian Grand Prix, held at Autodromo Nazionale Monza, just north of Milan, is known for high speeds and for the last four years, Mercedes dominance.

That the Silver Arrows would have such a firm grip at Ferrari’s home track is especially galling to the Italian organization and this year looked to be the one to reclaim their ownership of the track. The Prancing Horses had every reason to believe that they would win, having shown better straight-line speed in recent races and sensing that they had finally put Mercedes on their proverbial heels.

But there’s a reason races are actually run rather than gifting the trophy after qualifying.

Even with Ferrari locking down the front row for the start, Lewis Hamilton showed the reason why he’s a four-time champion by making a power move on Sebastian Vettel and stealing the second spot. With Vettel coming from the back after spinning from contact with Hamilton, Mercedes then were able to play a masterful team game.

The German organization left Valtteri Bottas out on old tyres in a move that backed him into Kimi Raikkonen, who then eventually fell into the clutches of Hamilton. Once Hamilton got around Raikkonen, the race was over, and he cruised home for the win. Bottas even managed to steal the final spot on the podium.

What a race like this one shows is how Mercedes improved their in-race tactics, which is an area where they had been flailing this season. Their exorbitant win total over the past four years has largely come from better cars, but they’ve been crafty too, winning at tracks where they’re performance is suspect and the Italian GP showed just how sly the team can be.

In one way of thinking, Mercedes are like a bit of a wounded animal – they’ve lost some of the arrogant pride that they’ve had for the past four years, seeing Ferrari earn some wins and Red Bull sneak past every so often – and it is because of these outcomes that they are seeking every way they can to gain an advantage.  Now with seven races to go, Hamilton is 30 points up on Vettel, and Mercedes are 25 points up on Ferrari. Neither lead is safe or insurmountable, but Ferrari is blowing a golden opportunity to take the crown from the king, considering they should be ahead and already getting a fitting.

– Tired of news about the frontrunners? Then the next few items should be a welcome sight. McLaren have announced that they will be moving Lando Norris up to their F1 program full time for 2019. The underwhelming Stoffel Vandoorne, who in all seriousness has been gifted terrible cars his whole time with the team, will be let go. McLaren is making the move because they feel that they would have lost Norris to Red Bull in the offseason – which is kind of funny considering that Red Bull just announced that Pierre Gasly will be joining Max Verstappen next year.

What Red Bull could really offer was a seat at Toro Rosso and the chance to move up to the mothership Red Bull should the performance be warranted. Considering that the Toro Rosso junior team has performed equal to or better than McLaren in a most of the grand prix this year, that move would make sense.  The only way to keep Norris, who at age 18 has already enjoyed a fair amount of hype, was to bring him to the top step.

Norris will be joining Carlos Sainz Jr. who was already announced to take Fernando Alonso’s seat. These two moves indicate that McLaren had really fallen out of like with Vandoorne, who was supposed to be a ‘can’t miss’ prospect. He now serves as an example of how bringing a young driver to a disappointing car can frustrate a career. Of course, had he shown more speed than Alonso, even on occasion, things would likely be different. The McLaren team is supposedly pushing Toro Rosso to take on their failed prospect.

– Toro Rosso is the new Iceland — it’s where all the hipsters want to go. With Racing Point Force India likely filling its seats with Sergio Perez and Lance Stroll, Toro Rosso has become the hot spot for drivers in flux to settle things.  It is likely that the Red Bull junior program will scuttle the Brandon Hartley experiment and have two open seats. While Daniil Kvyat may have the inside track on one spot, the other allows for a wide open field, with Esteban Ocon, the aforementioned Vandoorne, or Mercedes junior driver George Russell in contention.

Toro Rosso seems to be key in the last of the driver’s market, as compared to Sauber and Willilams, it’s an excellent ride.  Williams seek financial support from any driver that may join and Sauber has Ferrari ties that make it difficult to know how they may proceed.  The storylines for the final seats in silly season are likely to go on for a while.

– The next race is the Singapore Grand Prix in two weeks which begins a swing out of Europe and into Singapore, Russian, and Japan.  The race has frequently gained notice because it is the only one on the schedule run at night.

And supposedly Kimi was given notice at Monza that he wouldn’t have a ride with Ferrari next year. That helped play into the hands of Mercedes, although I think their strategy, unsporting as it was, was brilliant.

Ferrari has done the same thing to Mercedes more than once. Do unto others…