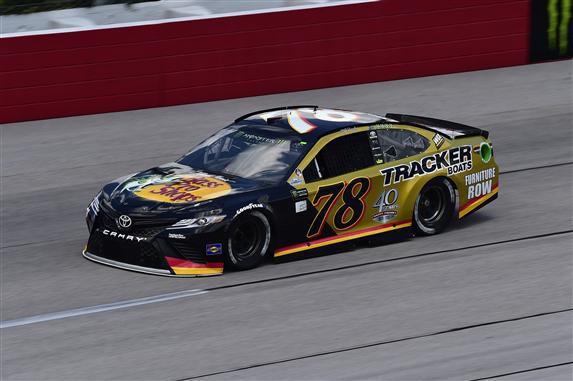 Furniture Row Racing will close at the end of the 2018 Monster Energy NASCAR Cup Series season.

The championship-winning team announced Tuesday (Sept. 4) in a statement that it will cease to exist at the end of the season, shuttering its No. 78 team driven by Martin Truex Jr.

“This is not good for anybody,” Barney Visser, FRR team owner, said in a press statement. “The numbers just don’t add up. I would have to borrow money to continue as a competitive team and I’m not going to do that. This was obviously a painful decision to arrive at knowing how it will affect a number of quality and talented people.”

Added Visser: “We’ve been aggressively seeking sponsorship to replace 5-hour ENERGY and to offset the rising costs of continuing a team alliance with Joe Gibbs Racing but haven’t had any success. I feel that it’s only proper to make the decision at this time to allow all team members to start seeking employment for next year. I strongly believe that all of our people have enhanced their careers by working at Furniture Row Racing.”

The team had struggled to secure funding for 2019 and beyond, and its future had been called into question in recent months, with Truex implying that he had been seeking potential employment elsewhere.

FRR is the reigning Cup Series championship team, winning the 2017 title with Truex. It also fielded a second car, the No. 77, in 2017 with Erik Jones, before sponsorship woes closed the operation.

“While I am saddened by today’s announcement, I totally understand the decision,” Truex added. “Barney Visser, Joe Garone and the entire Furniture Row Racing team took me in while my career was in a bad place, and together we reached the pinnacle of the sport. I will forever be grateful to each and every one of them, and also to Furniture Row, Denver Mattress and the Visser family.

“But make no mistake, this is not the immediate end. We still have unfinished business to attend to, and that’s to give everything we have to successfully defend our Monster Energy NASCAR Cup Series championship. Right now that is foremost on my mind, as it is with the entire team.”

Furniture Row Racing began in both the Cup and XFINITY series in 2005, remaining in the latter series through the end of 2006. It won its first Cup race in 2011 at the Southern 500 at Darlington Raceway.

This speaks volumes about how bad things are for NASCAR. If the current championship team can’t find sponsorship, what chance do less successful teams have?

Another Viewpoint
Reply to  Bill B

Furniture Row was always a marginal team. If HMS or Penske or JGR or SHR or even the crap teams like Roush and RCR shut down, that will be bad news for NASCAR. Sponsors come and go. The business plan for the sport now seems to be to use multiple sponsors rather than relying too heavily on a primary sponsor. Barney Visser clearly did want to play the game anymore and had no succession plan in place.

If he had no succession plan in place than he had no plans for it to be an ongoing business. End of story.
Other than that I suppose its like the old saying “sooner or later you run out of other peoples money,”

Or the other people stop trying to fill the unfillable pit.

Another Viewpoint
Reply to  David Edwards

Doesn’t Gene Haas still self-sponsor the #41? I would think he would like to have more sponsorship for that car.

Hendrick has sometimes put Hendrick cars on one of his.

Well, now Silly Season officially starts. Will MTJ go to JGR? Will Suarez go to Leavine? Or will JGR stick with youth and not re-sign Hamlin? Who will fill the seat at SHR when KuBu leaves? It will be fun to watch the dominoes fall now that the first one has fallen.

spot1
Reply to  Another Viewpoint

“Will MTJ go to JGR?” Um, yes, MTJ will along withe Cole Pearn and Bass Pro Shops. Suarez will be out the door.

Looking for a great buy on a NASCAR Charter membership, we have one available at FRR.

One thing about it we know what the value of a charter is. About 2 million dollars.

Won’t be long till they will be available on e-bay or QVC.

Nah. Not unleass the mega teams havng run all the small guys off turn on each other. Thats not likely to happen.

Sponsorship is hard to come by because the cost of fielding a competitive NASCAR team is astronomical. The business model for owning a profitable race team has reached the tipping point. Meanwhile, the NASCAR CEO for the last 15 years, the man responsible for managing the sport as a business, has been partying and doing drugs. Is it any wonder the dominoes are starting fall?

Maybe Barnie Vissar got everything he wanted out of the sport. He went from start and park, to a race winner (Regan Smith), to competitive (Kurt Busch) to championship contender (Truex) to champion. He also did most of this on his own dime (Furniture Row), make Furniture Row a household name. Plus, he suffered a heart attack last year. Perhaps, there was nothing more to do in the sport.
He tried to have a two-car team (and would have been successful, if sponsorship materialized.
They have a chance to go out on top, as the only two-time defending champions who walked away from the sport.

It is not unprecendented. Does anyone remember DiGard or Blue Max Racing?

Too bad no doubt it is not the end of the NASCARs favorite attention seeking pity party driver, whining Marty and his nasty crew chief!

F#ck off! go wash your Number #3 in a halo t-shirt. Not particularly a Truex fan but admire what Barney Vissar accomplished. Foe a Guy who started out with Rick Carelli at Colorado National that’s a big climb.
Please include all your racing accomplishments in your reply.