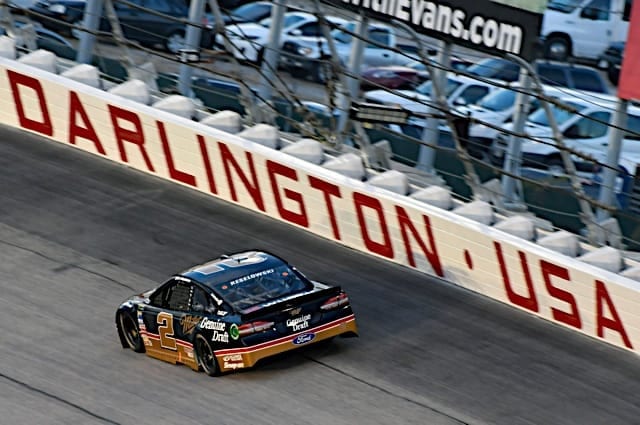 The XFINITY Series’ visit to Darlington Raceway marked the first of three opportunities for Ross Chastain to show what he’s capable of in top-notch equipment. And in his first start with Chip Ganassi Racing, all went well for the 25-year-old, who started on the pole and led 90 laps. That all changed with 36 laps remaining when Chastain tangled with Kevin Harvick, sending the No. 42 Chevrolet into the outside wall. Chastain responded by sending Harvick spinning with a hit to the right rear corner.

For his part, Chastain opted to focus on how grateful he was for the opportunity to run for CGR when asked about the incident post-race. Meanwhile, Harvick was none-too-pleased when he emerged from his No. 98 Ford.

“I tried to stay as low as I could and he just rode on my door,” he explained. “That’s just a really inexperienced racer and a really bad move there and got the air and got on beside me and just kept going up the race track. I couldn’t do anything with the wheel.

“So, you’ve got a really inexperienced guy in a really fast car and made a really bad move, and then wrecked me down the back straightaway and hooked me to the right. That’s probably the reason that he’ll never get to drive many of them again.”

It didn’t take long for the support to come pouring in, though. CGR owner Chip Ganassi chimed in, along with DC Solar co-founder and CEO Jeff Carpoff.

Sorry Harvick, Chastain will get at least two more chances behind the wheel of that No. 42 Chevrolet within the next few weeks.

But what really has NASCAR Nation up in arms in these days following the incident is what Harvick said. Sure, many were upset about the loss of a potential feel-good story for Chastain’s chances at winning that race, but the more I’ve read and listened to this week, the more it focuses on what Harvick said. He’s been called whiny, a sore loser and a host of other things I’d rather not repeat.

Step back for a moment and consider what Harvick may have been referring to with that comment. I don’t for a second believe that I know what he was thinking then. However, it wouldn’t be at all surprising if those remarks didn’t have anything to do with the initial contact and were more focused on the retaliation aspect.

Regardless of how you feel about the incident, we can all agree that on-track retaliation is a dangerous situation and can cause serious harm. Yes, yes, drivers take these risks knowingly… blah blah blah. The point is that there is enough danger in this sport that we don’t need intentional wrecking to be a part of that.

My initial thought listening to Harvick’s comments were to immediately jump to Chastain’s defense, because you won’t convince me Harvick wouldn’t have done the same thing if the roles were reversed. He was, after all, the driver in the middle with the lapped car on the outside. For all either of them knew at the time, that could have been the pass for the win, especially with so few laps remaining.

But the more I’ve thought about it, the more I see where Harvick may have been coming from; it is understandable for him to have been upset if it was about the retaliatory spin.

A little more food for thought though: fans clamor for a driver with a personality that’s not afraid to show their passion rather than those they would describe as “vanilla.” Enter that passion and everyone is quick to criticize. You can’t have it both ways, folks.

2. Team Penske’s 1-2 Finish Could Be a Step in the Right Direction

When the checkered flag flew over the Southern 500, Team Penske scored its first one-two finish since Richmond last April when Brad Keselowski led Joey Logano across the start/finish line.

“Probably more proud of that than the one-two finish because you’re thinking right around the corner here is going to be playoff time, and you’ve got to have some speed. So I think in the last couple races, Bristol and here, I know they’re unique racetracks, but to see the speed and momentum build, that’s key right now.”

At a time where momentum is critical and teams are looking ahead to the championship battle, it seems Team Penske might be finally hitting its stride after struggling for a good chunk of the season. That’s not to say they were running well, but Keselowski, Logano and Ryan Blaney haven’t really been much of a factor for most of the season. And that’s a surprise given how successful the Stewart-Haas Racing Fords have been this year.

“I’m hopeful today is the catalyst to get that work done because it shows that when we do hit it, we’re capable of executing at the level needed to bring home trophies.”

Sometimes all it takes is a little confidence booster to bring a team’s performance around, and a one-two finish is definitely the type of result Team Penske needed with the playoffs right around the corner.

While that all sounds great, let’s not forget that Blaney struggled mightily throughout the race and ended up 15th when all was said and done.

Really happy for @keselowski and that team for their win at Darlington. Well deserved. Thanks for doing a half burnout for me. We struggled from the beggining, thought we improved on some runs. Have to work on that place a lot for next year. https://t.co/D6grIoMR5I

So as great as the finish sounds – and it is – the organization still has some work to do before the playoffs roll around in a couple weeks. But if all three drivers start finding speed week after week, look out.

3. Is the Big Three Beginning to Falter?

Much of the season has been focused on the Big Three of Kevin Harvick, Kyle Busch and Martin Truex Jr., and rightfully so, considering they combined to win 16 of the first 21 races on the schedule.

But for the trio of drivers who won at a rate of roughly three times every four races, suddenly that number is reversed. In the last four events, one driver of that trio has found Victory Lane (Kevin Harvick – Michigan). Could it be that the Big Three is starting to falter if only just a little?

The last four races have run on vastly different types of tracks: Watkins Glen, Michigan, Bristol and Darlington. Just one of them even led laps at Darlington, and that was Truex, who held the top spot for 30 circuits but got hit with an uncontrolled tire penalty that left him mired a lap down for a large portion of the race. Meanwhile, Harvick and Busch never led laps and neither looked like they had what it took to compete with Kyle Larson (who did?) or the Penske duo of Keselowski and Logano.

“Sure, they should be scared,” said Logano when asked if he felt like the Big Three was starting to show vulnerability. “We’re coming for them. I don’t know, they’re still really strong teams. But the fact that we can keep up and race them and pass them, that felt good. That’s been about a year since I passed one of those cars. So that feels really good the last couple races. I didn’t know I could do that anymore. It felt good.”

With all of that said, the Big Three is still the group to beat as the series heads into its final race before the playoffs, and a few off races don’t change that at all.

But add in the distraction of Tuesday’s announcement that Furniture Row Racing – yes, the defending championship team – is ceasing operations at the end of the year and it could close the door on Truex’s spot inside the Big Three.

A few inches. Just a few inches in the battle off of pit road on the final pit stop Sunday night at Darlington Raceway turned out to be the difference maker for Kyle Larson, who dominated, leading a race-high 284 laps before being forced to settle for a third-place finish. It was the fourth time this season he had led more than 50 laps but came up short when the checkered flag flew.

“It’s always important to come out the leader off pit road or be the control car on the restart,” Larson explained. “I felt like if I could have been in clean air, I would have been alright. All day when I would get in traffic, I’d get loose. There on that last run I was just really loose and allowed Joey (Logano) to get by. I knew the only real weakness we would have throughout the race was a short run and that’s what it kind of came down to.”

You almost have to feel bad for Larson, who was the first Chevrolet driver to show any promise this season after the manufacturer switched to running Camaros. After all, he’s got four runner-up finishes and has yet to find his way to Victory Lane this season.

“It stings, for sure, to not win at a prestigious race like this,” he continued. “I want to win every race, but I want to win a Southern 500 really bad. So, it would have been cool to win that. But, at the same time, to bring a car to the race track like we did this weekend is something to be proud of and a big confidence-booster going into the next 11 weeks.”

The key for Larson and the No. 42 team is to keep an eye on the big picture ahead. He’s solidly in the playoffs, and if the team can find a way to finish off these dominant races and snag a win, it’ll be easy to add Larson’s name to the list of those who will battle for the championship in November.

5. NASCAR Throwback Weekend Was a Success

Regardless of how you felt about the actual racing Sunday night, it’s hard to deny how important the Southern 500 Throwback weekend has become. A nod to the history of the sport and a way to remember those that shaped it, the weekend has been embraced by teams and media alike.

The race itself may not have lived up to the hype, but the energy leading up to the race and the number of fans in the stands spoke for themselves.

Because it was such a fun weekend and a fantastic trip down memory lane, click here to take one more look at the schemes all in one place.

If Harvick was that upset about the retaliatory spin, someone in the media should remind him about his “accidental” spin of Trevor Bayne during that late restart at Talledega a few years ago. I thought that was a dirty move, especially when the in-car camera showed him looking to the right, just before he turned into Bayne. A lot of cars got torn up for no reason. Cry Baby Kevin should just keep his mouth shut.

As a TV viewer for the Southern 500 Throwback weekend it was terrible. Where was the short interviews with the racers from the past? At least show them on TV. The far away shot of a group picture was missing a lot of drivers.