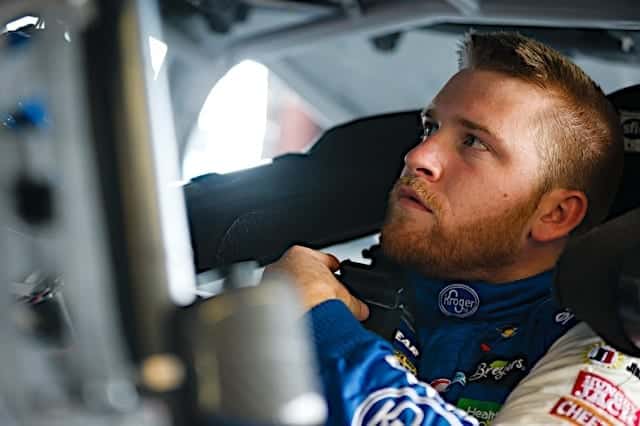 Darlington isn’t generally all that kind to drivers across the board, and sometimes it tends to be less so to those who are struggling to make ends meet week after week. It’s such a unique facility that there’s really no other track like it on the schedule, but it sure has the ability to derail a team’s season and emphasize the difference between the haves and the have-nots.

The long green-flag runs made for short numbers on the lead lap and even some of the sport’s elite drivers struggled. Oftentimes, you hear people say to race the racetrack rather than their fellow competitors, but sometimes that’s easier said than done, especially when it came to the speed disparity between fresh tires and those that had worn after several laps on the track.

In a race that saw very little attrition and 34 cars still running at the finish, it meant a bit of disaster for some of the more underfunded efforts. Meanwhile, others managed to eke out a night worth being satisfied with.

This week’s Frontstretch “Underdog of the Race” didn’t walk away with quite the finish that he had hoped for. Hovering right around the top 10 for most of the event and even running in the top five midway through the race, Chris Buescher ultimately fell to a 13th-place finish. But perhaps what’s more important is that it’s the fourth straight top 20 for a driver who’s spent less than 20 percent of the season running inside the top 15.

“It went really well overall,” Buescher told Frontstretch after the race. “We had good speed with our Bush’s Best Since 1908 Chevrolet Camaro ZL1. I am proud of this group they did everything I could ask, the pit stops were really really solid. The only thing we had two tires come apart on the right rears and that put us behind on track position from where we were. That was unfortunate but from start to finish, just a solid effort.”

The run is hardly worthy of a ton of major headlines, however, it’s worth paying attention to when it’s a momentum-building type of day. Sure, Indianapolis Motor Speedway next weekend may knock the No. 37 team down a notch or two, but there’s always that chance that Buescher can pull out a strong finish next weekend. After all, he did end up ninth when the chaos settled and checkered flag flew at the 2.5-mile oval last season.

David Ragan and Front Row Motorsports have been among the best underdog combinations of 2018 and were second in line behind Buescher on Sunday night. After starting 23rd, Ragan was 18th when the checkered flag flew on a night, but his race wasn’t without its struggles. After hitting the wall in practice, his team had to bounce back from that adversity and work with a car that didn’t have the correct balance when the green flag flew. The top-20 run is one that’s become an expectation of the No. 38 team this season, and anything less would be sub-par, at best.

Joey Gase, who already had to start at the rear of the field following an engine change, managed to run just 120 of 367 laps before tangling with Kyle Busch, who slid up the track, clipped the left rear corner of the No. 23 Toyota and sent it spinning hard into the wall. The terminal damage resulted in a 40th-place finish for Gase.

Lasting just a little over 100 laps longer than Gase, Matt DiBenedetto retired after just 254 laps and left Darlington with a disappointing 38th-place finish. It was the fifth DNF for the No. 32 team and its worst finish all season. Something about that result screams get Indianapolis here as quickly as possible. The positive that DiBenedetto can take out of this race? He finished one position better than seven-time champion Jimmie Johnson who looked more like an underdog than an elite driver on Sunday.

The last driver running at the end of the race was Jeffrey Earnhardt, whose night took a turn when Ryan Newman and Clint Bowyer got together while Newman attempted to pull off of the track onto pit road. The major contact sent the No. 31 car spinning up the track, and Earnhardt had nowhere to go. While making repairs under the damaged vehicle policy, the No. 96 team was nailed for having too many crew members over the wall and held for two laps.

His night only got worse, though, as he limped his way around the track, logging laps until the end of the race. A cut tire sent Earnhardt spinning to bring out the final caution and set up what turned out to be the upset Brad Keselowski was looking for. When the checkered flag flew, he was a dismal 34th, but for a driver who’s pieced together a 10-race season using four different numbers and three different teams, any track time is better than none at all.

The Darlington double-header began with the XFINITY Series teams toughing it out Saturday afternoon.

The VFW Sport Clips Help a Hero 200 was the first of three opportunities Ross Chastain has behind the wheel of the No. 42 DC Solar Chevrolet for Chip Ganassi Racing. While hardly an underdog ride, the 25-year-old, who regularly runs better than the equipment he has, was given a rare shot in top equipment. And he sure didn’t disappoint.

After starting on the pole, Chastain led a race-high 90 laps, won both of the first two stages and looked like he could be on his way to an upset win. Instead, he tangled with Kevin Harvick with 36 laps remaining. Harvick was out on the spot after a payback spin, but Chastain was able to soldier on to a 25th-place finish, hardly indicative of what he’d already done on the track.

Meanwhile, another driver notorious for getting more out of his equipment than it’s usually capable of in Landon Cassill scored a 14th-place finish in his first XFINITY start of the 2018 season behind the wheel of the No. 01 JD Motorsports Chevrolet.

Also walking away relatively unscathed was Jeremy Clements in his family-owned No. 51 Chevrolet. Scoring his best Darlington finish since an eighth-place result in 2016, Clements walked away in 16th still on the lead lap. It’s his second-best result ever in eight starts at the Lady in Black.

Fun night wound up p21 which was a solid day for us to be proud of. How about that wave thanks to the fans who were in @TooToughToTame you guys are the best! #nascar #wave pic.twitter.com/AeRytA7gg5

We wanted to send out huge THANK YOU to @JoeGibbsRacing for helping us out with parts and pieces getting our @Xtreme_Concepts Toyota ready to race on Sunday. #onetoyota @ToyotaRacing pic.twitter.com/BGLpe813v5

Well not how I was hoping our night was going to end and not sure what I could have done different but really appreciate all the fans support. Big thanks to @BKRacing_ for the opportunity and @sparksenergyinc @AgriSupply and @1eternalfan for teaming up with us https://t.co/pcwMcX2chy