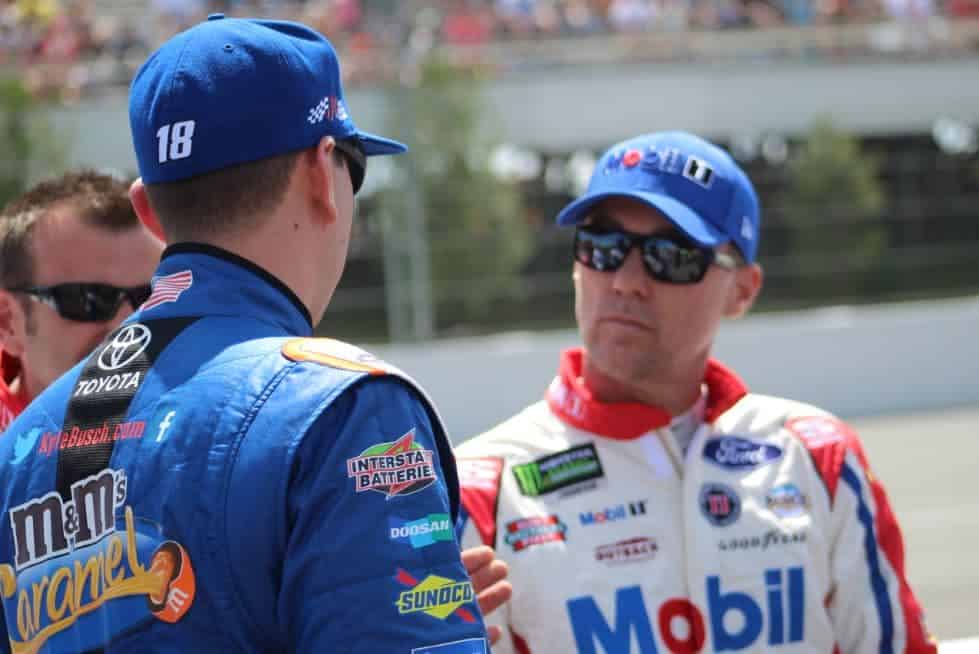 The Monster Energy NASCAR Cup Series wraps up its regular season this weekend at Indianapolis Motor Speedway. It’s the last chance for several bubble teams to clinch spots in the postseason and keep their championship hopes alive. The green flag flies on Sunday (Sept. 9) at 2 p.m. ET and can be seen on NBCSN.

Also, with only 0.1 points awarded for each lap led by a driver, the need for a dominator is less important when building a winning lineup. The 160-lap race will only have a total of 16.0 points up for grabs in this category. Take note when building your roster and focus on midpack drivers who can climb up toward the front on race day.

Last year, Busch was on the verge of winning his third straight race at Indianapolis before wrecking with Martin Truex Jr. on a late-race restart. That crash and resulting DNF ended a seven-race top-10 finish streak for Busch.

But the MENCS point leader should bounce back in a big way at Indy. He has an average finish of 10.9 at this track and will be a heavy favorite to win on Sunday. Busch should be the top choice on every site and in every format as he wraps up the regular season points title.

Harvick has the best average finish of all active drivers with more than one start at Indy. Even though he has only found Victory Lane once in 17 starts at the track, the veteran has been the definition of consistent. Since moving to Stewart-Haas Racing in 2014, his worst result at the Brickyard is eighth.

Expect Harvick to compete for a top finishing position and build upon an already historic season.

This week, Logano is priced among the sport’s elite drivers and for good reason. Much like Harvick, the switch to a new team completely revamped his success at Indianapolis. Logano moved into the No. 22 Team Penske Ford in 2013 and has finished inside the top eight in all five races since. He has also led laps in four of the last five, earning a runner-up result in 2015.

Logano will be a good pivot off the “Big Three” drivers this weekend. Expect him to finish off the regular season strong.

Truex and Furniture Row Racing have been in the news for the past few weeks as rumors circulated about the status of the team regarding next season. With confirmation coming at the start of the week about the team closing its doors at seasons end, the No. 78 team now has nothing to lose.

As mentioned above, the defending series champ was fighting for the win in this race a season ago before colliding with Busch and ending both their days. Prior to that race, Truex had finishes of fourth and eighth at the track with FRR. He is priced cheap compared to the drivers around him and should be a popular play this weekend.

Keselowski was able to sweep the weekend at Darlington Raceway and now heads to a track where he was the 2017 runner-up. Last season, he started 11th and climbed toward the front at Indy, leading 23 of 167 laps and just missing a maiden Brickyard 400 victory for Team Penske. He has led in six of his eight career starts at the track, including the last three straight.

Keselowski has the hot hand and should maintain his momentum this weekend. The No. 2 car is officially locked into the playoffs and won’t be afraid to be aggressive.

Surprisingly, Hamlin has yet to win a race this season. 2018 would be the first season in his career that he has failed to visit Victory Lane. The driver has shown the necessary speed the past few weeks but has been unable to capitalize and finish a race on top.

I don’t think he’ll win but the No. 11 Toyota should be a safe top-10 pick this weekend.

Suarez has also been brought up in NASCAR Silly Season rumors as of late. He is likely racing for a job while finishing out the season, the odd man out at Joe Gibbs Racing as they seek to add Truex for 2019. Lucky for him, Indianapolis is a place where he can impress.

Suarez should be a darkhorse pick this week, especially since he’ll be racing with a chip on his shoulder. Don’t miss out.

Buescher has been the best lower-tier driver by far over the past few weeks. He has four straight top-20 finishes and had arguably the best performance of his season last weekend at Darlington. In a race where top drivers and teams were getting lapped early and often, Buescher was able to keep himself toward the front and even ran inside the top five at one point. He finished the day 13th.

In two career Indianapolis starts, Buescher has an average starting position of 24th but an average finishing position of 11.5. He finished ninth in this race last season and is clearly the cheap option to target this week. 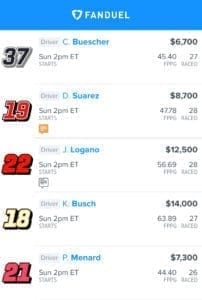