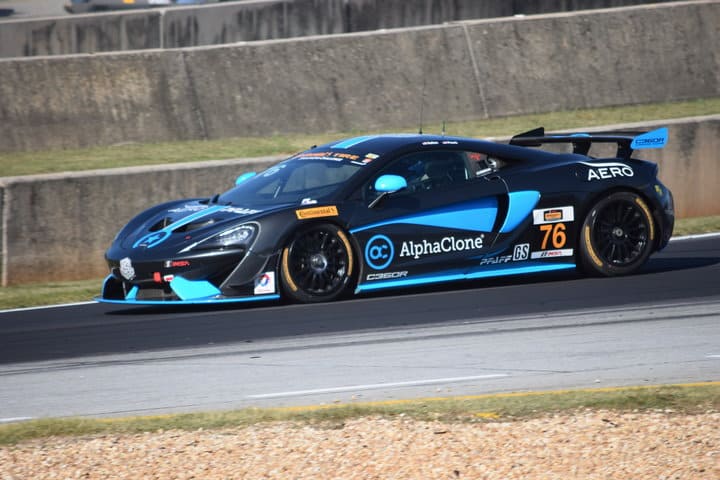 On Saturday, the IMSA Continental Tire SportsCar Challenge has their second to last race of the season at WeatherTech Raceway Laguna Seca.  Currently, 37 cars are entered.

In the Grand Sport class, 25 teams are entered.  There are quite a few changes of note here.

Bodymotion Racing’s No. 5 Porsche Cayman GT4 Clubsport MR is entered, but currently doesn’t have a driver lineup indicated.  The car has been shared all season by Stevan McAleer and Joe Robillard.

Paul Holton is out of the Compass Racing No. 76 McLaren for this weekend.  He’s been replaced by Nico Rondet, who drove the team’s No. 77 McLaren last year.  Holton is part of the McLaren stable of factory racers.  On-track testing of the new McLaren 720S GT3 has started in Europe.  Holton told Frontstretch back in May at Lime Rock Park that he was going to play a role in the development of the new car, so that’s the likely reason why he’s not there.

Cavan O’Keefe is listed as a driver of Rennsport One’s No. 18 Porsche.  This car has not raced in 2018, although it did turn in some laps at Daytona in January.   O’Keefe has not raced in the series since this race last year, where he drove a Maserati.  As of this writing, O’Keefe does not currently have a teammate.

Alexandre Premat is not listed in the Quest Racing Mercedes.  He’s been replaced by Roger Eagleton.  Also, both of the Automatic Racing Aston Martins are back on the grid.

In TCR, there are seven cars entered.  Here, both of the Rumcastle LLC Volkswagens are not entered, along with the RS Werkes Audi.  Roadshagger Racing, which debuted at Lime Rock, returns.  Brett Strom is helping to run that effort.  Had his own car not gotten wrecked at Lime Rock, the No. 67 Audi likely would have been on the grid as well.

Street Tuner once again has five entries.  There are no changes from VIR.