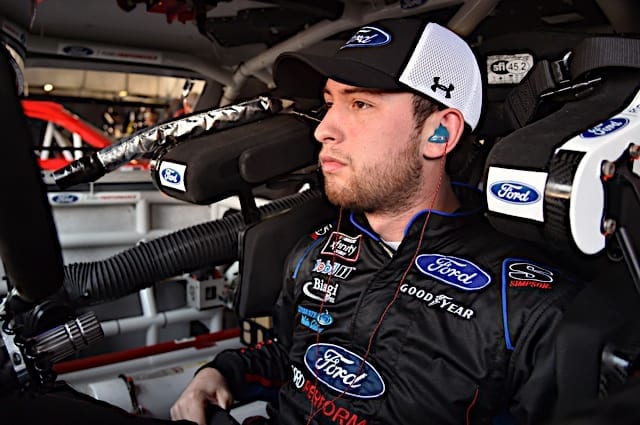 The 2018 NASCAR XFINITY Series season is something Chase Briscoe hasn’t experienced before —not only being a rookie but running a part-time schedule for two of the top Ford Performance teams.

Briscoe, 23, is the 2016 ARCA Series champion. In 2017, he won the season-finale at Homestead-Miami Speedway in the Camping World Truck Series for Brad Keselowski Racing. However, that team shut down over the off-season, leaving the Indiana native without a ride for 2018.

It didn’t take long — in fact, a day after the conclusion of the 2017 NASCAR season — for Briscoe to find a ride, with a partial schedule for Roush Fenway Racing. In late March, Stewart-Haas Racing announced he would be in the No. 98 XFINITY car for a handful of races as well.

But in 11 XFINITY starts this season, Briscoe has two top-10 finishes, with a best outing of ninth at Chicagoland Speedway in late June with RFR. Finishing in the top 10 in the No. 60 car may come as a surprise to some since it has three top 10s the entire season.

For Briscoe, 2018 has been a learning experience.

“It’s been a bad year in my opinion,” Briscoe told Frontstretch, summing up 2018. “Only having two top 10s, personally, I feel like that’s unacceptable on my end. Racing once a month is tough, especially when you’re driving a new car and jumping back and forth from team to team. It’s hard to get into a rhythm.

“The [No.] 60 car kind of had their work cut out for them a little more with three drivers with three totally separate backgrounds. That doesn’t really build a good notebook, and that’s been the biggest struggle on the 60 side. On the 98 car, it seems like we can’t catch any luck.”

Through 24 races this season, the No. 60 car sits 22nd in the owner’s standings, below underfunded teams such as Jeremy Clements Racing, Ryan Sieg Racing, Go Green Racing and DGM Racing. However, Briscoe believes the team is looking up, though he’s driven it just three times since Chicago.

“I feel like driving once a month, you can tell when you get in it, it’s getting better and better,” he said. “As a team, we’ve done a really good job of trying to find speed. At the beginning of the year, we were probably a 15th- to 20th-place car, and now, we’re about a 10th-place car. It’s hard to jump up spots like that in the XFINITY Series.”

Out of the three drivers piloting the No. 60 car, Austin Cindric, who is splitting time between RFR and Team Penske, has seen the most action with nine races. Briscoe has competed in eight, while Ty Majeski has been in the car seven times this year.

Ironically, the three drivers have totally different racing backgrounds. Briscoe grew up winning on dirt, while Cindric, despite being the youngest of the trio, is an experienced road racer. Majeski has proven to be one of the best short track drivers in the country, constantly winning big events in late models.

But since Briscoe isn’t running a full schedule, he isn’t eligible to run for a championship. That’s been one of the biggest challenges to manage.

“That’s the hardest thing for me, going from ARCA to Trucks to not be running for a championship,” Briscoe said. “The ultimate goal is to go [Monster Energy NASCAR] Cup [Series] racing, and this is the closest you can get to Cup racing. Any experience you can get is good.”

But since Briscoe isn’t running for a title, he believes it puts more pressure on him to win.

“Especially in my situation, not having a big sponsor or anything,” Briscoe said. “Ford puts their neck out on the line for me, so if I’m not running up front or winning races, there’s no need for them to spend money on me.

“When I’m only running 12-15 races per year, it’s hard to go out there and prove what you can do. The XFINITY Series has been a big jump from the competition standpoint, so it definitely adds a little bit of pressure.”

Moving forward, Briscoe will run five of the final nine races of the XFINITY season. He will run the No. 60 car this weekend at Indianapolis Motor Speedway, as well as Dover International Speedway and Homestead. He will pilot the SHR No. 98 Ford for a pair of races at the Charlotte Motor Speedway Roval and Kansas Speedway.

While it has been a tough year, Briscoe wants to continue getting better — proving he’s worth a full-time ride.

“I think just trying to run up front and be consistent,” Briscoe said of goals for the remaining races this year. “The Stewart-Haas cars have been a lot more competitive, so I feel like there’s a little more added pressure when you go over there to go run up front and win races.

“Over here [at RFR], just trying to consistently run top 10. The biggest thing is keeping this thing clean — it’s been tore up a lot this year. Just trying to learn as much as I can, especially with a part-time schedule, you’ve got to make all the laps, and if you’re wrecking out early in the race, you’re not learning anything.”

The No. 60 car has been involved in some sort of incident 19 times this season in 24 races, which leads to a frustrated Jack Roush.

“I know at one of the debriefs, he threw his glasses and said, ‘Hey, you guys are going to keep tear them up, you can come fix them,'” Briscoe said. “Jack [Roush] is super involved. We’ve been fortunate not to tear up too much, we’ve torn up some body stuff, but we haven’t killed one other than [at] Pocono [Raceway]. So far, I’ve been good on Jack’s side, so hopefully, we can continue that.”

In 11 races this year, Briscoe has an average finish of 18.8. His best finish of the year was ninth at Chicago, though his best placing for Stewart-Haas Racing was 11th at Charlotte Motor Speedway in late May.

Chase Briscoe needs to have a permanent race car. not jumping back and forth from one car to another. Let Chance show what he can do, is capable of, with a sponsor that wants to win. Yes, it may take a few races but he will drive his butt off.