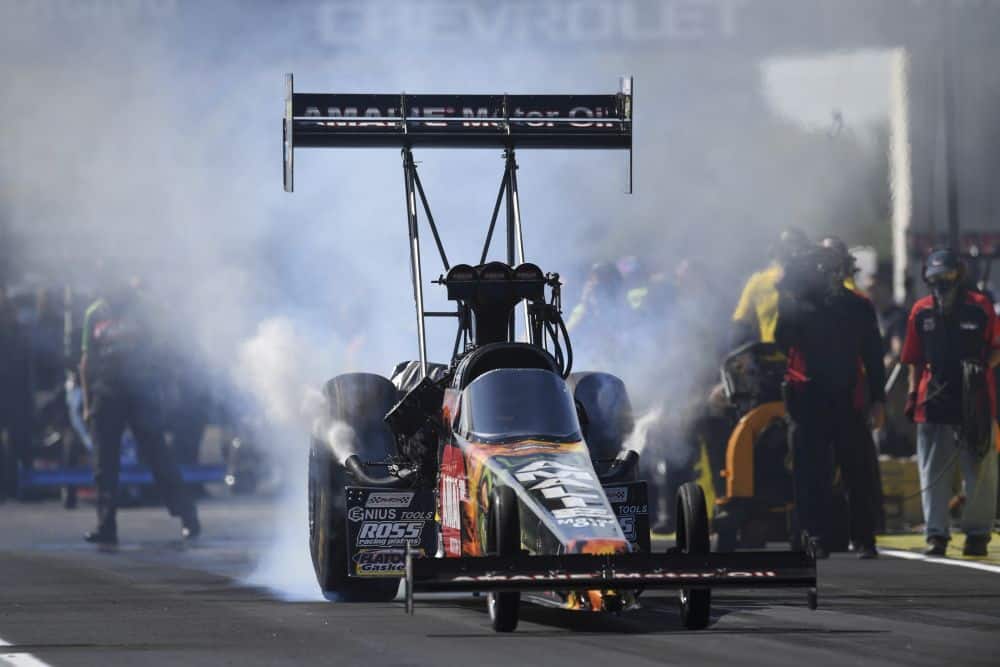 The biggest racing weekend of the NHRA year has passed, and after the dust settled, it was Terry McMillen, J.R. Todd, Tanner Gray and LE Tonglet holding the big trophies and the bragging rights.

For McMillen, it was just his second career Top Fuel win, but it was something he thought would never happen after he nearly left the sport three years ago.

“I’ve always said persistence outweighs resistance,” said McMillen. “That day in Charlotte, I had briefly lost faith in that statement. Ultimately it was the fans and Amalie that believed in me that day and picked me up. There are two things that everyone remembers about a season: they remember the season champion and who won Indy. I’m very proud of my team for accomplishing that goal. We won Indy, and no one can ever take that away from us.”

McMillen faced off against Doug Kalitta in the finals and made a run of 4.037 seconds at 300.66 miles per hour to beat Kalitta’s 4.067 seconds at 303.57 mph. He also beat Scott Palmer, Steve Torrence and Blake Alexander in earlier rounds.

“This is by far a dream come true,” said Todd. “You don’t know if you’re ever going to win Indy, let along go back-to-back. For whatever reason, this year just felt different. It felt like we had a car that could come in here and win. Last year, the confidence wasn’t there like it is this year.”

Pro Stock also featured another first time U.S. Nationals winner in Tanner Gray. This was his fifth win of the season and locked him in as the No. 1 seed for the Countdown. Gray faced off against veteran Jeg Coughlin Jr in the finals and ran a 6.641 second, 208.42 mph pass to beat Coughlin’s 6.639 seconds at 206.80 mph. He also defeated John Gaydosh Jr, Jason Line and Drew Skillman en route to the finals.

“I guess the main thing is that I want to strive to be the best driver that I can be,” said Gray. “I continue to work and don’t really settle for what I am right now. I think every driver’s dream is to win Indy at least once, and it’s pretty cool for me to be able to do that.”

LE Tonglet faced the tall order of beating four-time world champion Eddie Krawiec in the Pro Stock Motorcycle final, but proved he was up to the challenge — riding his bike to a 6.864 second, 197.10 mph pass over Krawiec’s 6.884 second, 197.02 mph effort.

“I try not to think about anything,” Tonglet said. “We just go up there and try our best, and whatever happens, happens. I don’t lose sleep over this since this is still a hobby for us. We just come out here to have fun.”

As for the Countdown, plenty of drama was had by drivers trying to secure those final spots to earn a chance to try for a championship. Bo Butner locked down the only open slot remaining in Pro Stock. Top Fuel saw early disappointment for Richie Crampton, as his chances went up in smoke with his tires. Mike Salinas, number one qualifier on the weekend, locked himself into ninth spot, while Scott Palmer, not wanting to risk an oildown points penalty with a less than perfect car, pulled his ride off the starting line in the first round and got the 10th and final spot.

Tim Wilkerson lined his Funny Car up early in order to try to keep his fate in his own hands and won his first round matchup, locking him into the top 10, while Bob Tasca, Cruz Pedregon and Jonnie Lindberg bowed out in round one.

When the smoke cleared in Pro Stock Motorcycle, the final four open spots were snatched up by Scotty Pollacheck, Steve Johnson, Angie Smith and Angelle Sampey, who tied Jim Underdahl but got the nod on the tiebreaker.

The Countdown kicks off in two weeks from Maple Grove Raceway in Reading, Pa.