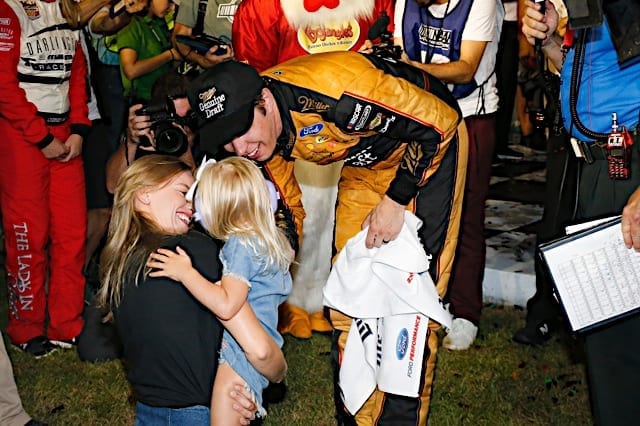 For the fourth straight year, NASCAR throwback took the center stage this weekend in Darlington. As the grandstands were packed, it’s truly a crown jewel race that is a must-see for any NASCAR fans and a must-win for any NASCAR driver. NASCAR Hall of Famers like Jeff Gordon, Richard Petty, David Pearson, Cale Yarborough and others have a Southern 500 victory on their resume and on Sunday, another driver added his name to that list.

Brad Keselowski tallied his first victory of 2018 on Sunday by beating Kyle Larson off pit road with less than 25 laps remaining. Keselowski has clearly not had the speed lately but how did his victory throwback the power rankings for this weekend?

Kevin Harvick honestly had the fastest car of the Big Three and that still didn’t mean much. The real problem facing Harvick this weekend was racing in the XFINITY Series on Saturday. Harvick and Ross Chastain were battling for the lead and when they entered the backstretch, things went south from there.

Harvick went on to blame Chastain for an incident that was clearly his fault. This has led to Harvick ultimately announcing that it’ll take a big deal for him to race in the XFINITY Series again.

So you’re saying that was all it took?

Kyle Busch had an interesting race on Sunday and much like the rest of the Big Three, not much came out of the No. 18 at least and it was just kind of odd, especially after the strong performance at Bristol by Busch.

Indianapolis has been a good track to Busch lately and it could be the place where he picks up his next victory.

Joey Gase goes hard into the wall after contact from Kyle Busch. pic.twitter.com/xKdKwtZ1AA

As noted in the tweet below, Chase Elliott is one top 10 away from passing his longest career top 10 streak. Since his victory at Watkins Glen, it has been expected for him run up front and that is what he has done. Elliott missed out on the issues his Hendrick Motorsports teammates faced Sunday night which included two engine failures and a flat tire on the No. 88.

The name of the game for Elliott lately has been survival and that is a good way to enter an elimination style playoff.

One more for @chaseelliott and he’ll have surpassed his longest career top-10 streak. pic.twitter.com/s2UCNi4cA5

Things have been going awry for the driver of the No. 78. First, he doesn’t do very much in a race he dominated in 2016. On Tuesday, Furniture Row Racing announced it will cease operations following the 2018 season leaving Truex on the free agents’ list.

The latest news points to Truex heading to Joe Gibbs Racing replacing Daniel Suarez who could possibly be out of a ride when the music ends when the 2019 season comes to a start.

NEWS: Multiple sources have confirmed to FOX that Martin Truex Jr. and Cole Pearn will go to Joe Gibbs Racing and the No. 19 car next season. pic.twitter.com/8sHhscVJnB

Erik Jones was kinda just there on Sunday but still managed to round out an eighth-place finish. This is the momentum that is needed to head into the playoffs and has a consistent run but something will have to change and the organization will need to get better in order to compete against the other teams who have multiple victories.

Kurt Busch was running the same paint scheme that he ran when he finished second in 2003 to Ricky Craven. Busch was one of those drivers who really was hurt by the pace of the race as he was trapped a lap down early and considering the number of cautions that faced the race, it was hard to get a lap back.

The lady in black didn’t want to dance with me tonight. Thought we had a top 5 car, but we got pinned a lap down at an unlucky time, then the radiator got clogged up. Luckily I had a @roushyates engine and it held together for us to be able to battle back and finish 6th. pic.twitter.com/dAEm5dWB1z

Ryan Blaney was a part of the most bad-a$$ celebration in the history of post-race celebrations. Blaney had a strong piece himself but much like the rest of the field, just didn’t have the pace to keep up with way faster cars like the No. 42.

Really happy for @keselowski and that team for their win at Darlington. Well deserved. Thanks for doing a half burnout for me. We struggled from the beggining, thought we improved on some runs. Have to work on that place a lot for next year. https://t.co/D6grIoMR5I

Do you ever have those days where you’re riding on a Sunday and Monday just comes out of nowhere and you hit it like a wall?

That is how Clint Bowyer felt on Sunday when he made hard contact with the No. 31 of Ryan Newman who was apparently pitting. Bowyer blamed lapped traffic for his terrific night and he had a reason to be irritated. The lapped traffic in all three series lately has just been a nuisance.

Gotta say, it worked on me… mmmm chicken ? https://t.co/eozRgyRSic

Kyle Larson had the speed to contend against the Big Three on Sunday Night and it showed by the fact that he was lapping cars left and right. A late race loss on pit road by mere inches cost him the victory. Indianapolis hasn’t been one of his best tracks but if the speed is there, Larson could make a run for a victory to close out the regular season.

Had a hell of a car last night with a great opportunity to win a big race. Didn’t work out unfortunately but was extremely proud of the car our team brought to the race track. Thank you @DCSolar @carpoff_jeff for the support. Hopefully get you a win in the cup series soon!