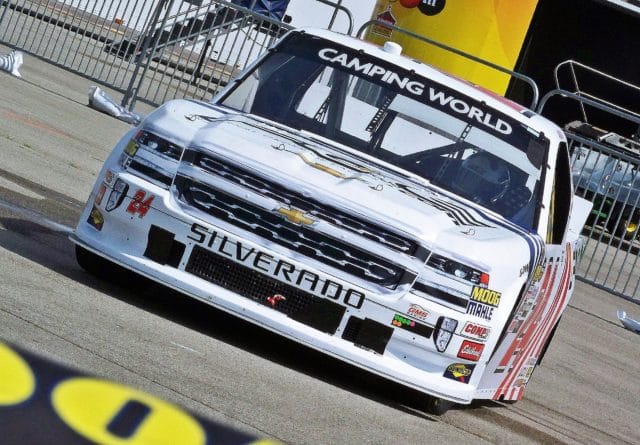 Every time NASCAR heads to Indianapolis Motor Speedway, it brings back memories of when the Camping World Truck Series would race at the short track currently known as Lucas Oil Raceway.

In the past, the series would typically open up the race weekend in small-town Indiana ahead of the NASCAR XFINITY Series at the same track. Then, the Monster Energy NASCAR Cup Series drivers would put on their show (or lack thereof at times) on the historic 2.5-mile oval.

Though the facility has gone through a myriad of name changes throughout the years, it often put on the kind of racing that drew me into the sport in the first place.

The track first opened in 1960 on the drag strip portion of the grounds, which was completed first in large part thanks to assistance from the NHRA. Born from a 267-acre farm that was purchased in 1958, the layout actually featured three different configurations, including the short track, an NHRA drag strip and a 2.5-mile road course.

Jump to 1995, when the first Truck race was held on the 0.686-mile oval. Mike Skinner, who won just about everything in the series’ inaugural season, led all 150 laps en route to his sixth of eight wins that year. A quick look at past winners at the track includes Ron Hornaday Jr, Jack Sprague, Dennis Setzer and Johnny Benson. In fact, it’s almost like a who’s who when it comes to those that built the Truck Series in its earlier years.

The Truck Series continued to visit the track, which has been owned by the NHRA since 1979, all the way through the 2011 season. But when the 2012 NASCAR schedules came out, it was curiously missing, as the series dropped from 25 events down to 22. The change coincided with the XFINITY Series move to Indianapolis Motor Speedway.

As the facility continues to age, the focus has changed a bit to focus on how the facility can be utilized year-round. According to an article from the Indianapolis Star, the track is in the middle of a “multi-million dollar renovation.”

“For us, it’s a matter of it’s a (nearly) 60-year-old property and what’s the future of it?” Kasey Coler, the track general manager, told the Indianapolis Star. “How do we expand the offerings? How do we not just be a Friday, Saturday, Sunday type of facility? We have this land, we have these facilities. It’s an aging facility, so it needs a lot of TLC.”

Last year, the NHRA ownership group purchased a 75-acre plot of land and applied for a $1 million grant through the Indiana Economic Development Corporation’s Motorsports Improvement Fund. The grant was approved and used to build a new pavilion.

“Because of the dreams we have, because of where it was a number of years ago, [the $1 million grant] was very critical to our business, but you can use that very quickly on a property,” Coler explained. “We were very fortunate to be able to invest that in the property and continue to improve what we’re able to do.”

With the pavilion complete, phase one of track renovations can begin, which focus solely around the drag strip. Phase two would move on to the oval track, with the ultimate goal of enticing NASCAR’s return.

Much like Darlington Raceway that was mentioned in this column last week, Lucas Oil Raceway is definitely a track that should be on the Truck Series schedule. In fact, it should have never been taken off in the first place. It’s the type of track that the series was built on, and the recent increasingly vocal majority have urged NASCAR to return the sport to its roots.

At this point, I’m not holding my breath for a Truck Series return to Lucas Oil Raceway (or Indianapolis Raceway Park or O’Reilly Raceway Park if you want to call it that instead), but it’s a track that’s definitely on my ideal schedule for the series.

I too dream of a return to IRP. And to North Wilkesboro. And to Rockingham. And to Hickory. And to South Boston. And to Lonesome Pine. And to Milwaukee. And to Colorado Springs. And…

This should be a priority for any schedule changes in the works. Moving the Xfinity series to IMS hasn’t changed anything for the better. Xfinity just cheapened the aura that used to be around the Brickyard 400. I think having Trucks and Xfinity at IRP makes a trip to the Brickyard 400 a more exciting proposition. You can make the trip, get two nights of short track racing, then the big show at the Brickyard. It also use to have a feel that if a driver “earned their stripes” in the lower levels at IRP they could soon earn the ability to race at the Big Track. I went to Indy the first year after the move, and while I had a good time, I would have preferred to see Trucks and Xfinity at IRP.