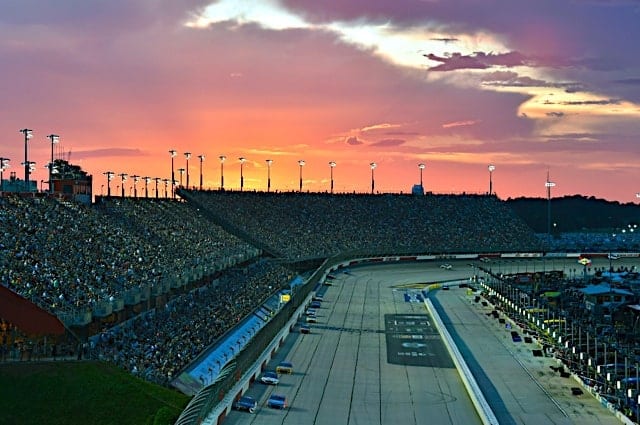 Luck is the word that was on my mind the entirety of Labor Day Sunday. Having arrived at Darlington Raceway only 12 minutes prior to the scheduled green flag of the Southern 500, I was lucky that a lightning delay pushed the start of the race back. Having slept in 30 minutes later than I had planned leaving from New Orleans that morning, I was lucky to avoid a vehicle fire and subsequent closure of I-20 east of Atlanta, minimizing what was already a lengthy delay in getting to Darlington in the first place. Having been away from home in the South for going on three weeks, I was lucky to have chosen to walk to the grandstands via Turns 1 and 2 instead of 3 and 4, and getting to see seemingly every beautiful woman from the University of South Carolina along the way.

And most of all, I left Darlington Raceway feeling lucky as a race fan. Lucky that we still have the Southern 500, and that we have it back on Labor Day, where it belongs.

The reality is, from 2004-2014, regardless of what Darlington Raceway chose to call it, the annual race (or races) at the Lady in Black was/were not the Southern 500. Running in the spring (or even November as was the case in 2004) meant that drivers never faced the scorching sun, dripping humidity and general misery that are the Carolinas during the peak of summer. And as for the fans, as great as racing at Darlington always is, the race was no longer the crown jewel that evoked memories of Bill Elliott and the Winston Million. Winning at Darlington is special, just like winning at Daytona, but there’s not a driver alive that would trade a Firecracker 400 trophy for a Harley J. Earl.

Fortunately for Darlington, the decade-long intermission of the Southern 500 proved to be an obstacle it could overcome, and Sunday’s race was the just latest success story for a truly historic venue. The first words out of Brad Keselowski’s mouth after taking the checkers Sunday were “finally, a major!” without hesitation. That’s coming from a Cup champion (and Firecracker 400 winner for that matter).

As Frontstretch’s own Amy Henderson pointed out earlier this week, even with some empty patches showing in the corner backstretch grandstands (and some obvious Bojangles tarps covering seats), Darlington looked full on Sunday; per capita, it was probably the densest crowd a Cup race has had since Speedweeks, sans maybe Watkins Glen. Speaking as someone that was in the stands, it felt full as well. And with more than 80 percent of the starting grid sporting throwback colors, it was abundantly clear just how serious race teams were taking this event. Even Derrike Cope’s car looked badass. Sunday’s race may not have been a classic, but it was absolutely worth braving 90 percent humidity in 97 degree heat for.

I can say this with certainty because attending Sunday’s race was the last stop in a true cross-country road trip. For the 18 days prior to that Sunday, I had been on the road, traveling old Route 66 from Chicago to Santa Monica, conquering what is referred to as America’s “mother road.” And the similarities between Route 66 and the Lady in Black are striking.

Both are living antiques to those who love them, antiquated relics to those who don’t. Route 66 exists today as a living history lesson for the road warrior, simultaneously blending the nostalgic look of the 1950s in diners and museums across the country with hundreds of miles of decaying, abandoned road bed and junked classics abound.

Darlington is a living history lesson of NASCAR’s past, a truly unique track that was designed to fit into its environment rather than cutting through it, blending tire grating action that still demands the best of modern race cars into the confines of a barebones facility in the middle of absolutely nowhere.

To those who relish the past, Route 66 harkens back to simpler times, evoking the nickname “Main Street USA.” Darlington harkens back to NASCAR’s prime in the Winston Cup era, when race teams were plentiful and it was the fastest growing sport in America. To those who don’t, Route 66 is slow, inefficient and even frustrating, passing through countless small towns in an aimless bob and weave. Darlington offers next-to-nothing in terms of amenities, with tight grandstands and offering a 500-mile grind of a race that, as Bob Pockrass noted during Sunday’s lightning delay, rivals the World 600 in terms of average run time. In an America where the love of the automobile is waning, and attention spans with it, both could seem hopelessly outdated.

And both share a similar history. Route 66 was unceremoniously decertified in 1985 after being bypassed by the Interstate Highway system; it would be nearly a decade later before Congress would pass legislation to commemorate the nation’s first highway as a historic site. The Southern 500 was unceremoniously dropped in 2004 in favor of a 500-mile race in Fontana, California (not far removed from Route 66 it turns out) that proved so enthralling that 20 percent of the fans in attendance were said to missing from their seats because they were “shopping under the grandstands” according to track spokespeople.

Fast forward to 2018, and both (fortunately) still live on, though it can be argued that the Southern 500 has fared better. For one, rather than going out with a whimper the way Route 66 did (the highway was bypassed over and over for decades leading up to its 1985 decertification), the last Southern 500 in 2003 before its 2015 rebirth was a massively popular race, with Terry Labonte scoring what would be the final win of his career, after a dominant Ryan Newman ran into trouble on a late-race pit stop.

While Route 66 definitely lives on today and has seen a revitalization in communities across the country (everything from the murals of Pontiac, Illinois to the street corner tribute to the Eagles in Winslow, Arizona), the reality remains that time has taken its toll; seeing the aging original road overgrown and chunked up for hundreds of miles is simultaneously mesmerizing and depressing. For every car museum along the route (and there are many), there’s five junkyards worth of classic cars and truck rusting beyond recognition along the way as well. For all the efforts of many dedicated to preserving the old route, the reality is Route 66 is an obscurity today, more known for its role in the movie Cars than as a destination road trip or historic artifact.

That’s not to knock Route 66, or its many fans, historians and benefactors. And perhaps it’s not fair to compare or to expect the same results in revitalizing, a 2,500-mile highway that takes weeks to traverse with a 1.3-mile speedway that hosts a five hour event once a year. But if we’re being honest, even among romantics, traveling Route 66 is a labor as much as a pleasure. It’s hard to navigate, it’s often difficult to drive, both in terms of speed and road conditions, and there are often tens, if not hundreds of miles between stops worth making. As much as there are segments of it that are worth driving 10 times over, there’s others where time has truly marched on and not coming back.

The Southern 500 could have easily gone this route. Barely an hour north of the Lady in Black, the old North Carolina Speedway in Rockingham sits quiet and overgrown, its own rebirth into NASCAR racing derailed by the financial insolvency of its owner. Darlington persevered, thanks in no small part to maintaining a Cup race date, even if it wasn’t the Southern 500. Race fans deserve a large bit of credit for keeping the Southern 500 relevant, clamoring for it even after NASCAR moved its Labor Day event back to the South (and put on races worth watching on the roughshod asphalt of the Atlanta Motor Speedway). The race teams, sponsors and even broadcast teams deserve credit for taking the throwback weekend concept and running with it (Darlington’s success has other series taking notice; ARCA now has a throwback weekend at its fall Salem race, while the CARS Tour took its first stab at a throwback weekend in Hickory last month), making the Southern 500 an even more unique event on the Cup schedule.

Whatever the reason, whatever the story, the Southern 500 is vibrant, alive, and kicking, and has retained its spot along the Daytona 500 and World 600 as a crown jewel in stock car racing. It’s living history every bit as alive as the races that made it historic.

All race fans are lucky for that.

Let’s not forget that BZF thought running the Labor Day classic was better off at California than Darlington. That should tell you all you need to know about his leadership.

And yet it was one of the most boring races of the season, won by a pit stop, not by on-track racing. Yeah, Darlington is old. That doesn’t automatically make it a great track.

Carl D.
Reply to  Another Viewpoint

Of course being old doesn’t make Darlington a great race track, anymore than being new makes Joliet a track where great racing occurs. You keep stating that the Southern 500 was won in the pits… so what? That’s part of racing. Had Larson won, you’d no doubt be complaining that the race was boring because one team dominated the entire race. This Darlington race was no barn burner for sure, but this track has certainly hosted it’s share of them. The throwback promotion doesn’t make the track great, but it certainly adds something unique to the weekend experience. If you’re looking for something a little flashier, by all means go to the race at Las Vegas, and leave Darlington to those of us who appreciate a unique, challenging track steeped in history and tradition. Just another viewpoint.

Here’s the finish of the 1980 Southern 500 that I drove down to. Pearson lost two laps early and made them up the old fashioned way.

Another Viewpoint
Reply to  Carl D.

You’re right about one thing. The race was a total bore BEFORE the obligatory Jeffrey Earnhardt caution changed the outcome. I don’t need glitz; I just would like to see actual racing. We don’t see it much at the cookie-cutters and we don’t see it at the old-school tracks like Darlington either. All the whining by the Luddties is not going to turn back the clock. And that’s a good thing, because the good old days were never really that good.

Carl D.
Reply to  Another Viewpoint

Nothing, no organization or sport survives and flourishes by retreating into its past rather than advancing towards the future.

Brian has his vision. How did the future work out?

Think it would be more accurate to say it was/is a family vision. So how exactly will going backwards solve things. Things that, if the truth were told directly impact them and the stakeholders, not us. An analogy would be when your favorite TV show is canceled. Hurts by a real impact? not really.