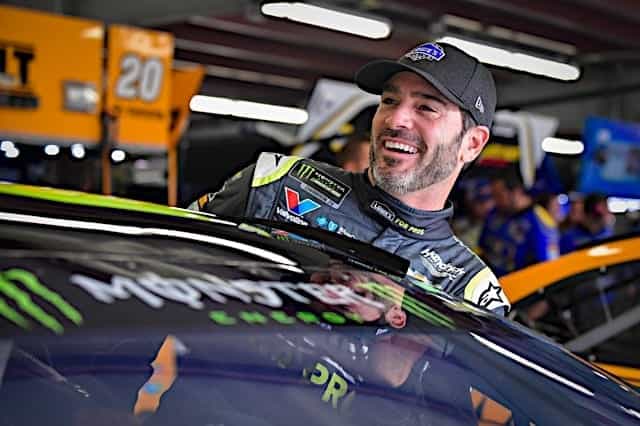 The landscape of NASCAR was changed earlier in the week when Furniture Row Racing announced it would be shutting down following the end of 2018 due to a lack of sponsorship. Oh by the way, Jimmie Johnson is still looking to secure sponsorship for the 2019 season.

In early March, Hendrick Motorsports announced Lowe’s would not be returning in 2019, after spending the past 17 seasons as the primary sponsor of the No. 48 car. And in the months following the announcement, the team has yet to announce a partnership for next season.

But with the success of the No. 48 team, winning seven championships and recording 83 race victories with Lowe’s, what more can teams do to pick up sponsorship?

“I don’t know the particulars of the No. 78 team, but I do know how Hendrick Motorsports works. Rick [Hendrick, team owner] is a very smart business man, and his business-to-business relationships he has with sponsors is what really helps us stand out, and help us have these long lasting relationships,” Johnson told Frontstretch on Saturday. “I believe Roger Penske is in a very similar manner.

“Obviously, unique situations, not common through the garage area, but anytime you can be more than just a marketing item for a major company, I think your chances are higher to succeed, higher to hang on to, higher to find in the first place. That’s really something that I think if other teams had that luxury would help quite a bit.”

Currently, Lowe’s and FedEx are the only sponsors in NASCAR that sponsor the whole season for its drivers. Shell Pennzoil sponsors almost all 36 races for Joey Logano.

Johnson confirmed that Hendrick Motorsports has renewed 14 sponsors from this season. He also remains confident about finding the right fit.

“We have a great product to offer at Hendrick Motorsports,” Johnson said. “Things are changing in their value and there’s negotiations that take place. This sport may be taking a reset of sorts. But, I feel the reset has happened and I see an uptick in some markets and some areas. We’ve seen plenty of new companies interested in being involved with Hendrick Motorsports or with the No. 48 car, so it’s the lens you’re looking through and I have an optimistic view.”

But he truly believes its the business-to-business partnerships that HMS has that will secure him moving forward.

“When the racing team is viewed more than just a marketing exercise and they actually bring value, that’s when they think twice and will be like ‘alright, we’ll cut something else than marketing,” he said. “A different program, but we’re keeping our NASCAR program.”

Over the past few weeks, rumors have begun to swirl that Lowe’s may in fact return to the No. 48 team, but in a limited role. Johnson would not confirm that.

As the regular season ends this weekend at Indianapolis Motor Speedway, Johnson sits 15th on the playoff grid. If no driver outside the top 16 in points wins on Sunday (Sept. 9), the No. 48 will remain the only team to make the playoffs every year since its inception in 2004.