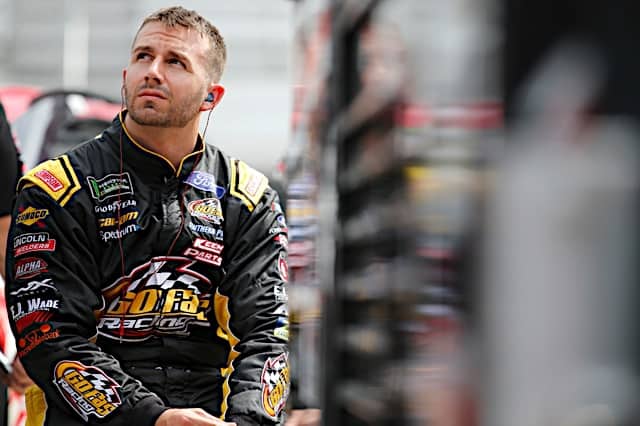 Matt DiBenedetto announced Friday evening that he was leaving Go FAS Racing at the conclusion of the season.

DiBenedetto, 27, is in his fourth season in the Monster Energy NASCAR Cup Series and second with Go Fas Racing. The California driver has four top-10 finishes in his career, his most recent being a seventh at Daytona in July.

GFR and DiBenedetto have slightly improved on their results from last year, going from a 27.1 average finish to a 26.5. But DiBenedetto still ranks 30th in points, worst among all full-time drivers, and that Daytona race was also his only top 15 of the season.

In DiBenedetto’s statement, the driver said that he was making a “leap of faith” and “betting on himself,” while also not announcing any concrete future plans. Judging by the language he used, it doesn’t seem like DiBenedetto was forced out of the ride.

Go FAS Racing, a joint venture owned by Archie St. Hilaire, Joe Falk, and former longtime crew chief Frank Stoddard after St. Hilaire and Stoddard merged their operations after 2013, used a wide variety of drivers every season before settling on DiBennedetto for all of the 2017 and 2018 seasons. In January, the team sold its charter to the Wood Brothers and Joe Falk partnered with the team, bringing his own charter for the one car operation to use.

I will have a media availability in the media center tomorrow at 9:45am pic.twitter.com/cZ4DsKQ7pI

Due to circumstances beyond my control, we will have to reschedule tomorrow’s media availability. We will let you know as soon as we get it figured out

aj allmendinger is retiring after this season and JTG is going to a 3 car team. This hasn’t been announced yet and the only reason why I know is I have a friend’s mother that works in the front office at JTG.
I have a feeling this is where Matt is going to land.

This guy acts like he is some superstar with the media hanging on every word. What a tool!