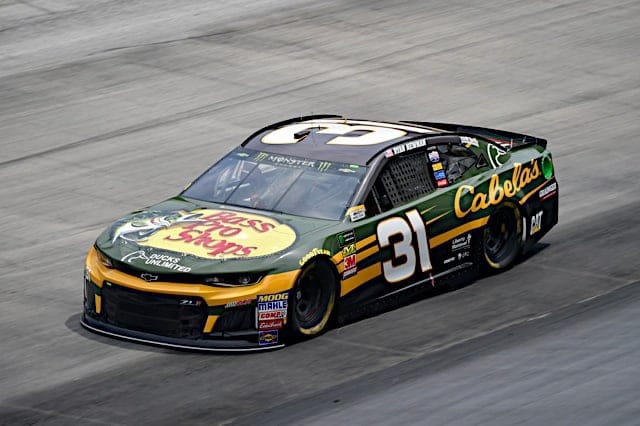 Entering the 2018 season, Ryan Newman and the rest of the Chevrolet camp had a lot of unknowns with the introduction of the new Camaro ZL1. Many of those unknowns have now been answered as the regular season comes to a close on Sunday (Sept. 9) at Indianapolis Motor Speedway.

Newman, 40, is winding down his fifth season with Richard Childress Racing. This year, however, has been a rather challenging one for the native Hoosier, sitting 18th on the playoff grid, having to win at IMS to secure a spot into the postseason.

“It’s been a horrible season. From my standpoint and what my standards are, it’s been horrible,” Newman told Frontstretch on Saturday. “We’re making it so that we’re not finishing on a horrible note.”

Through the opening 25 campaigns of 2018, Newman has yet to score a top five finish, though posting six top 10s. The No. 31 team’s best outing was at New Hampshire Motor Speedway in mid-July, crossing the finish line sixth.

As a whole, Chevrolet has been down, winning just two races, one of which was the season-opening Daytona 500 when Newman’s Richard Childress Racing teammate Austin Dillon scored the victory. But in the 24 events since the Great American Race, Chase Elliott‘s dominating victory at Watkins Glen International is the only win the new Camaro can hang its hat on at the Cup level.

“I think the Chevrolet Camaro has been – I don’t want to say a letdown because I don’t want it to be misconstrued, but it’s been a challenge,” Newman said. “I think the results show that when you have a seven-time champion like Jimmie Johnson struggling to make the playoffs and hasn’t won a race. He hasn’t forgotten how to drive a race car.

“It just shows that we’ve had our challenges collectively. That’s no dive at Chevrolet or the ZL1, but the facts are the facts. Hopefully tomorrow we can prove that we’ve made it a winning racecar.”

Over the past month or so, Newman is pleased with the turnaround in speed at RCR. In the past eight races, the No. 31 team has five top 10 starts, including Michigan International Speedway, when both he and Dillon qualified and raced well.

“The bright spots have been making our race cars better,” he said. “We are also making gains on things that we were struggling with, and not everybody does that. There is a time where you continue to slide down the hill and we’ve hit the bottom of our hill and are working our way back up. It’s just a matter of whether we can make it to the top.”

Meanwhile, Newman has an average finish of 18.7 this season, which is his worst average finish over the course of a season since 2008, his last year at Team Penske. The No. 31 car has been out front for 57 laps — the most in his tenure at RCR, 40 of those coming during the first four races of the season.

Regardless of the statistics, the former Daytona 500 and Brickyard 400 champion still believes he can get the job done.

Newman said: “I’m aware of our team and our situation. When our pit stops are struggling, I call them out. When I make a mistake, I call myself out. If we make a strategy call that doesn’t make any sense and in the end costs us positions, I call it out.

While the No. 31 team has had a few good runs this year, some of those were by happen-stance, others by having the pure speed. But Newman has only had back-to-back top 1os once this year.

“It helps to have those good runs after you’ve been struggling, but it’s also important to have consecutive good runs so that it’s not just a one-off,” he said on whether the team gains momentum with a solid finish. “Those one-offs give you hope, but they crush you even more afterward.”

As Silly Season is in full swing, Newman said he’s still working on his future plans. Thus far, he has one victory, 19 top fives and 60 top-10 finishes in 169 starts for RCR.

Sorry Ryan. It’s amazing you’ve been around this long. In NASCAR years, your as old as dino dung. Wish you very well on your next endeavor.