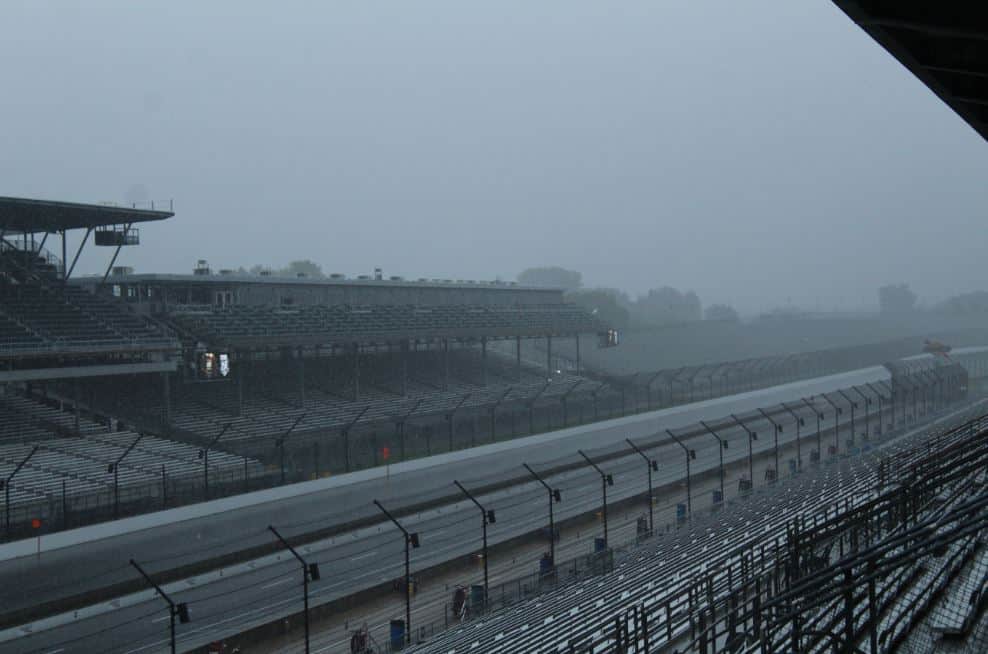 Moving NASCAR’s Indianapolis race to early September was designed to shake up the schedule. Its new spot as the Monster Energy NASCAR Cup Series regular-season finale increased its importance. A race that drivers still consider a crown jewel was pushing hard to put fans back in the seats.

A wet and weary weekend has left this year’s Brickyard 400 postponed to Monday (Sept. 10) and sitting on the fringes of the national sporting landscape. It’s hard to see the crowd topping last year’s dismal effort, not with the 2.5-mile oval still a misty mud puddle as of Sunday night. A race already suffering from bad timing (see: Colts NFL season opener down the street) now must withstand the sucker punch of awful weather.

Will Indy and NASCAR recover? Playoff storylines supposed to define this race fell short this summer. 14 of 16 drivers already have locked in their spots; the others must defeat Jimmie Johnson and Alex Bowman by winning. Kasey Kahne proved it’s possible in 2017 but those upsets are also exceedingly rare.

It’s clear that type of Cinderella story is exactly what NASCAR needs heading to the playoffs. But the sport’s top drivers including Kyle Busch and Kevin Harvick will already start up front with the rainout. (Martin Truex Jr. failed pre-race inspection multiple times and will start at the rear). The underdogs will have a tough task ahead of them.

Perhaps tire troubles will give them a shot? Multiple competition cautions are expected as NASCAR holds concerns over Goodyear’s compound. Pit strategy could also rule the day if the race becomes a series of short green-flag runs. Perhaps the Big Three could stumble?

Either way, it remains to be seen how many fans will withstand the weather (and the delay) to come see it. – Tom Bowles

Another washout, this time in NASCAR’s XFINITY Series means the Lilly Diabetes 250 will begin at 10 a.m. ET. On Saturday, NASCAR postponed the event until Monday and will now run a doubleheader. Cup full-timer Ryan Blaney will lead the field to the green flag in what’s going to be a marathon day of racing. It’s a schedule that will see Blaney, Chase Elliott, Austin Dillon, Ross Chastain, B.J. McLeod, David Starr and Timmy Hill run both events.

Once the race gets started, it should be highly entertaining, utilizing a high-drag restrictor plate package used for the first time at the Brickyard last season. In the 2017 race, there were 16 lead changes — the most in six XFINITY races at Indy. William Byron went to Victory Lane in that event.

This year, there is guaranteed to be a new winner at the track. None of the 40 drivers competing in the XFINITY race have ever won at Indianapolis. – Dustin Albino

Camping World Truck Series: Getting Back on Track Next Weekend

After three long weeks, the Camping World Truck Series returns to the track this Friday night (Sept. 14) when drivers make their second trip to Las Vegas Motor Speedway for the second race in the Round of 8.

With his surprise victory at Canadian Tire Motorsports Park, earned when teammates Noah Gragson and Todd Gilliland spun together coming out of the final turn, Justin Haley is already locked into the Round of 6. Meanwhile, Johnny Sauter remains as the point leader with Brett Moffitt hot on his heels. The duo finished sixth and third, respectively at Mosport. Grant Enfinger and Ben Rhodes currently sit below the cutline with two races remaining to shape the Round of 6.

On Friday at WeatherTech Laguna Seca, Action Express Racing announced its plans for the 2019 IMSA WeatherTech SportsCar Championship season.  Once again, the team will field two Cadillac DPi-V.R.’s full-time.  The driver lineups will be different, though.

In the No. 5 Mustang Sampling-sponsored entry, Filipe Albuquerque and Jõao Barbosa will return for their second year as full-time teammates.  Christian Fittipaldi, who serves as the team’s sporting director, has already announced his retirement from driving in 2019.  The 47-year-old plans to compete in January’s Rolex 24 at Daytona, then hang up his fire suit.  Fittipaldi’s retirement opens up a spot in the No. 5 for at least Sebring and Road Atlanta.  That spot is currently unfilled.

In the No. 31 Whelen Engineering-sponsored entry, Felipe Nasr will return to the team full-time.  He will be joined by Pipo Derani, who moves to the organization from Tequila Patron ESM.  Eric Curran, who currently shares the No. 31 with Nasr, will cut back to only the endurance races. – Phil Allaway

With Formula One off this weekend, most of the F1 world’s attention went toward a subject that is intensifying as we approach the last leg of the season. What is going to happen to Kimi Raikkonen and Charles Leclerc as it pertains to the second Ferrari seat in 2019? The F1 world was buzzing late last week as a potential leak to the situation was given on the Facebook page of Garage Italia. You may not know who Garage Italia is, but new Ferrari chairman John Elkmann does, and that is because Garage Italia is run by Elkmann’s brother Lapo Elkmann. A (now deleted) post by Lapo’s business read as the following.

“Proud to have believed in you since the debut in @f1. Proud to have accompanied you on the track, curve after curve. Happy to see you soon at the wheel of the Red @charles_leclerc”

While this post may not mean anything, and could just be a piece of encouragement, the Raikkonen fanatics took to the internet and started a petition to keep him in the prancing horse. It’s a petition that has reached up to 28,000 signatures the last time I checked.

But is that the best decision for Ferrari? If you asked me, no.

Charles, or Sebastian Vettel for that matter, would have left Lewis Hamilton behind in that final stint at Monza as Ferrari had more horsepower. Raikkonen ran the tires off it and settled for a runner-up finish. It has been clear that since the hybrid era began in 2014, Raikkonen has been on the back foot and is not the same Iceman we grew to love at McLaren, his first stint with Ferrari, and Lotus (on the track, Raikkonen is still a legendary person). For Ferrari’s sake, it is time to get the youngster Leclerc in the car so they can put their best foot forward to compete for a Constructor’s Title. – Drew Mongiello

Another short track stop on the ARCA Racing Series tour fell victim to weather this weekend, with the series’ visit to the Lucas Oil Raceway postponed due to constant rainfall all day Friday (Sept. 7). Rain prevented race cars from taking to the track at any point on Friday. As a result, the Shore Lunch 200 has been rescheduled for Saturday, Oct. 6.

“It’s always our goal to race on the originally scheduled date, but Mother Nature just didn’t allow it tonight,” said ARCA president Ron Drager. “Not only was the weather not favorable tonight, the forecast for tomorrow calls for a 100 percent chance of rain all day. So in conjunction with our partners at Track Enterprises, our Menards vendor partner and race entitlement sponsor Shore Lunch, our television partner for this weekend MAVTV, and the people here at Lucas Oil Raceway, we decided it was best to let everyone head home rather than spend another day here in the rain.

“We’ll look forward to coming back here on Oct. 6 with much better weather. In the meantime, we turn our attention to the Kentuckiana Ford Dealers Fall Classic at Salem Speedway next Saturday night.”

Per social media, ARCA officials indicated they are in discussions with MAVTV regarding a potential broadcast of the rescheduled race, though such an arrangement has not been confirmed at this time.

The ARCA Racing Series is scheduled to be back in action for “Throwback Weekend” this Saturday night (Sept. 15) at the Fall Classic at Salem Speedway. Coverage is slated for MAVTV. – Bryan Davis Keith

The race at Indy is only a ‘crown jewel’ because of the prize money, and if you give any credence to the ridiculous ‘playoff’ format. Personally, Indy has proved to me that it’s intended purpose for running Indy car races is the only legit reason to be there. from the ‘crowds’ there lately, it seems many fans agree with me.

“Crown jewel” was a myth created by the nascar PR machine and promoted by a complicit media. Indy never wanted stock cars –ie a bunch of Southern rednecks to poison the rarefied air of highly engineered open wheels. That is until they needed their rear ends saved after the IRL/CART debacle.

Money can be very persuasive when rationalizing a decision. Just ask Brian.