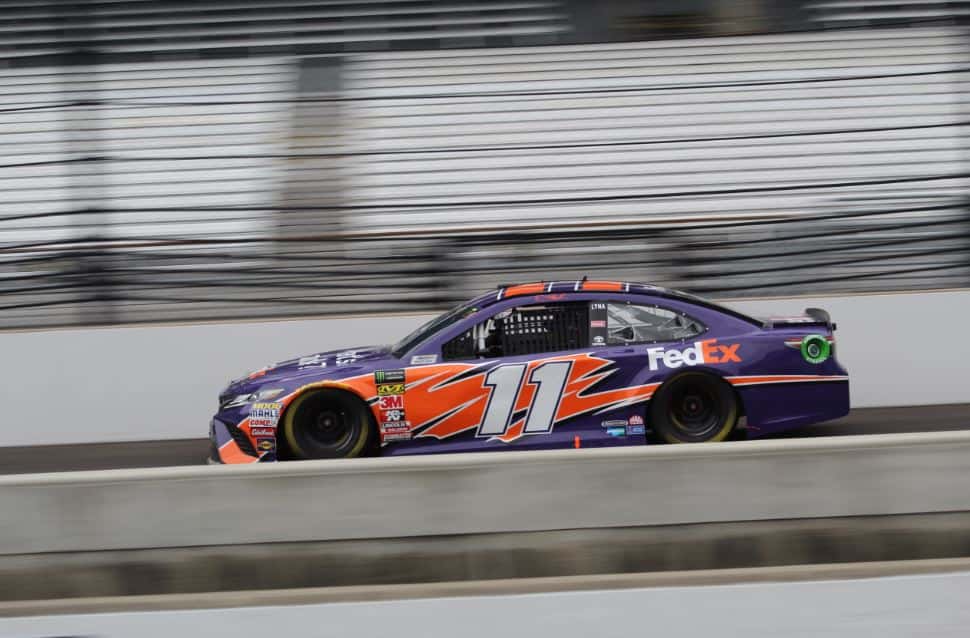 Denny Hamlin had one of the fastest cars in Monday’s Brickyard 400, though coming up just short of his first-career victory at Indianapolis Motor Speedway.

Hamlin took the green flag in 10th position for the Brickyard, but proved early on the No. 11 was one of the best cars. While some drivers decided to short pit, Hamlin picked up eight stage points and finished third.

Stage two was much of the same. However, crew chief Mike Wheeler called Hamlin to pit road with race leader Clint Bowyer, three laps prior to end the stage. The duo wanted to earn the playoff point, but didn’t want to risk running out of fuel. The No. 11 finished the stage 20th.

When the final stage began, Hamlin was cycled to the front, while he and Bowyer ran away from the field. Wheeler had Hamlin make his final pit stop three laps before the No. 14 car, allowing the No. 11 to pull away by more than a second when Bowyer exited the pits.

It looked like it was going to be a battle for the win between the two veterans, then a late-race caution flew for Landon Cassill and Jeffrey Earnhardt.

“We executed flawlessly on pit lane, our strategy was good, we had a fast car, just circumstances. Cautions killed us at the end which allowed those guys to go up there,” Hamlin said post-race. “Those meaningless cautions at the end by drivers multiple laps down – what they are doing crashing with a few laps to go, I have no idea. It cost us the race.”

Ultimately, Brad Keselowski and Hamlin bumped and banged with two laps to go to win the Brickyard 400, and his Joe Gibbs Racing teammate Erik Jones got around the No. 11 car for second. Hamlin took the checkered flag in third position.

“We want to win a race, get some momentum and we deserved to win this race,” Hamlin said. “We had one of the fastest cars. Us and the [No.] 14 were very strong. I hate the cars that caused the cautions had nothing to do with this race.

“All I care about is not winning this race. It’s one that was big on my races that I wanted to win and the team gave me the car that was certainly capable of doing that today. We executed flawlessly on pit lane, our strategy was good [and] we had a fast car.”

Hamlin paced the field for 37 laps, equaling the amount Bowyer spent at the front of the field, which was a race-high. It’s also the most laps he’s led in a race since the sixth race of the season at Martinsville Speedway, where he led a season-high 111 circuits.

This is Hamlin’s third time finishing third in the Brickyard 400, his best outings in 13 career starts at the famed track. The No. 11 team enters the playoffs seeded 13th, with just three playoff points this season.

Hamlin said: “I’m definitely happy with our speed, but it’s hard for me to see any positives right now. I’m hung up on all the negatives of not winning this race and really disappointed from my standpoint. That’s the way it goes sometimes.”

“We want to win a race, get some momentum and we DESERVED to win this race,” Hamlin said.

Maybe they’ll give him a participation trophy.

Poor Denny… I guess someone forgot to tell him that those pesky lapped cars sometimes get in wrecks. Damn the lousy luck… he was entitled to that Brickyard win!

I guess he figures Indy owes him one now. It seems he’s forgot the wins he got when those same drivers gave him the chance to win at the end.

Deserved’s got noyhing to do with it.
Get in line behind Mario and Michael as far as deserving at Indy

Never fails but I guess this is why Denny’s name comes up every time I am asked in a conversation what is wrong with NASCAR these days? Spoiled rich kid drivers who think that if they have the fastest car everyone needs to get out of their way and let them win – they forget, this is a RACE.

I do agree that it’s very frustrating when back-marker drivers with no chance to win affect the outcome of a race by bringing out a caution. However this has always been a factor in NASCAR races. This didn’t bother me until they started the double file restarts. Back when lapped cars occupied the inside lane on restarts, the leader started with the 2nd place car behind him and thus clearly controlled the restart and his own destiny. Now it has become more of a crapshoot on restarts where the leader does not have a chance to re-establish his lead before being challenged.

bob
Reply to  Bill B

Good take on what happened and perspective.

I totally agree with Hamlin it looked scripted as soon as the commentators started talking about a caution and Roger Penske had not won a Brickyard Race it`s a caution. Hamlin should have won that race. It is so unfair that somebody who was never a threat to win wins because cars or on the track that have no chance to win or be in the top ten. Most of the time the underfunded teams causing a wreck or simething at the end they changes the outcome of a lot if races. Take them out of the race before the end

Here’s an idea… Nascar could eliminate everyone not on the Stewart-Haas, Gibbs, Penske, and Hendrick teams after the first stage, then run the rest of the race with just those eleven cars.

Really, Denny was just disappointed and spouted off. There was nothing scripted about the end of that race. Nobody told Jeffrey Earnhardt “Wreck, and when you do, hit the wall so hard that the back of your car comes three feet off the ground. Everybody knows you Earnhardts love concussions.”