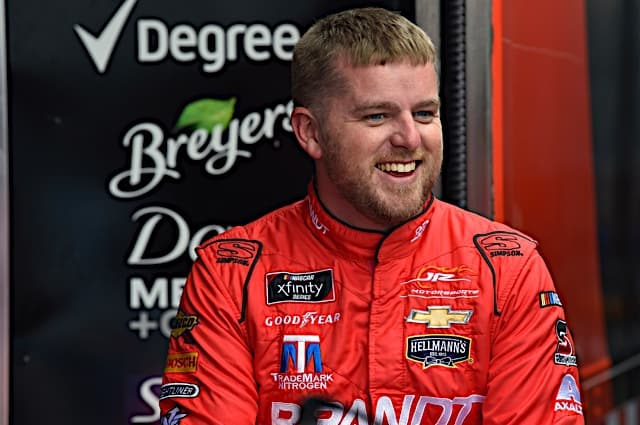 Justin Allgaier was able to hold off teammate Tyler Reddick to earn his fifth victory of the 2018 season. Before 2018, Allgaier had a total of five victories in his XFINITY Series career. Ryan Blaney, who started on the pole, finished third while Chase Elliot and Daniel Hemric rounded out the top five.

Blaney and Allgaier led the field to green after two days of waiting. The initial restart was about the only calm part of the race. Controlled chaos resulted in a record 7 cautions and some of those accidents involved playoff contenders Elliott Sadler and Austin Cindric.

Stage one was filled with solid racing action. The close-quarters racing was bound to ruffle up some fenders and on lap 24, it did just that. Ty Dillon got loose, spun, and when the field began coming by the No. 3 clipped the No. 1 of Sadler sending both into the outside wall. Dillon would drive away while Sadlers’ car would drive back on the hook. Cindric and Spencer Boyd would get damage from going through the grass putting both behind the wall.

After the debris, and grass were cleaned off the track, the field went back to green filling the remainder of the stage with side-by-side racing. The ending of the stage had a four-wide finish for the stage win. John Hunter Nemechek would pull out of line and earn the stage victory by mere inches over Justin Allgaier, Ryan Preece, and Cole Custer. That would result in the third straight stage win No. 42 car

The finish replicated the 2013 Freedom 100 finish with four cars going four wide at the line.

Stage two would kick off to begin some wild racing involving  Hemric, Christopher Bell, Justin Allgaier, and others. Jeremy Clements would find his way into the top-10 and run with the bigger teams. The battling within the field was strong but Hemric would ride away with the stage victory but the real chaos kicked off in stage two.

On lap 73, Custer misjudged the cars behind him and was clipped by the No. 19 of Brandon Jones. The contact sent the No. 00 down into the grass destroying the front end and causing him to lose control of the car. He went back up onto the track but luckily, everyone avoided his vehicle.

Cole Custer walks away after a violent crash. pic.twitter.com/LFrfGxrZij

Another violent crash highlighted the final stage involving Hunter Nemechek and Ryan Preece put out the red flag. Preece went to enter the backstretch with Nemechek under him. Preece spun down the track making hard contact with a tire barrier. Indianapolis Motor Speedway track officials had to repair the tire barrier which was the reasoning for the red flag.

As the laps began winding down, drivers were taking their positions for the end of the race. Allgaier was in the lead and with Reddick, Blaney, Elliott, and Hemric not being able to make a pass, Allgaier was able to tally the victory and inch closer to the regular season championship.

The XFINITY Series regular season comes to a close at Las Vegas next Saturday. Allgaier has a 49 point lead over Custer heading into the finale.