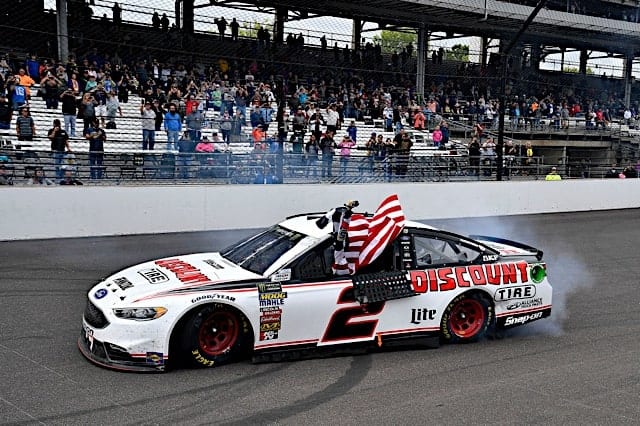 Matt Kenseth has not had a very successful comeback this season. After leaving Joe Gibbs Racing last year, Kenseth sat out the first three months of this season before returning to Roush Fenway Racing to run part-time in the organization’s No. 6 Ford. He’s since only performed slightly better than Trevor Bayne in the troubled ride, until Sunday.

Kenseth won the second stage due to pit strategy, but he also spent most of the race rallying through the field- he had the second-largest amount of green flag passes in the field- and also spent long periods of time as one of the fastest cars on track. A jack falling on the last pit stop of the day spoiled a possible top-five finish, and the 2003 champion had to settle for 12th. Considering that’s a ride that averages about a 24th finish regardless of who’s in the ride, that’s pretty impressive.

“We were fairly competitive,” Kenseth said after the race. “I felt like we had a top five to seven car. It’s hard to tell exactly because we weren’t always on the same tires, but we kept putting ourselves behind with the way the cautions fell and the way we did our strategy. And then the car fell off the jack when we were running fourth or whatever. That was pretty much the end of our day.”

It’s time for NASCAR to really look at minimum speed rules. After wrecking, the No. 88 somehow met minimum speed requirements in spite of seemingly half of the car creating smoke after getting out there. What’s more is that he did it with a lap in the 55-second range, basically off by a planet from the leaders.

As bad as it would have been pulling Alex Bowman out of the race when he could have still passed Jimmie Johnson in points, he wasn’t going to. Bowman would have needed to gain over 20 points on Johnson, hard enough without the wreck but impossible with the wreck.

The No. 88 wasn’t the only offender today. The No. 66 was dangerously off pace almost the entire da, and was somehow lapped before the first competition caution on lap 10. This isn’t a roast of driver Timmy Hill or owner Carl Long, but if you can’t survive 10 laps at Indianapolis without being lapped, maybe you shouldn’t be out there.

This was the second straight race where there has been a bit of controversy as far as these slow cars go; think back to Clint Bowyer and Ryan Newman‘s wreck last week at Darlington. Everybody with an able car has the right to be out there, but not if said vehicle is going to be lapped 10-15 times even without getting into an accident.

As far as the race quality itself… it was Indianapolis. A lap after the restart, everybody usually settled down and went back single file until the next caution. It was not as crazy as last season; there were plenty of hard wrecks, such as Darrell Wallace Jr. losing his brakes once again or the last caution between Landon Cassill and Jeffrey Earnhardt. But there were more than half the field running at the finish, no overtime, and although there were 10 cautions, two of them were competition cautions.

When… will Martin Truex Jr. turn it around?

Although he’s been locked into the playoffs for months, nobody has had a tougher road to get to them than Martin Truex Jr.

The defending series champion came into Indianapolis with four finishes outside of the top 10 the past five races, and only 59 laps led from a team that led over 2000 last year. Earlier this week, Furniture Row Racing announced that it would be shutting down at the conclusion of the season, which is going to be a major distraction no matter what the team says the rest of this year.

Then, to finally start the rain-delayed race at the Brickyard, Truex reported a brake issue on the pace laps. That didn’t stop him from marching up from starting last to as high as third before the brake rotor broke and went through the oil cooler to end his day.

“We got a great bunch of guys here,” Truex said after the race. “A great bunch of hard core racers. “Nobody is going to put their heads down and give up, I can promise you that. We’re going to come out swinging in Vegas.”

Where… did the pole sitter and defending race winner end up?

Kyle Busch started on the pole courtesy of being the points leader entering the event. The day was not a win for Busch, but it was a success, albeit with some adversity. Busch led 27 laps, but had mistimed tire problems and couldn’t muster more than an eighth at the finish.

Kasey Kahne had to back out of this race due to an issue with heat exhaustion after last week’s race at Darlington- an ailment that might keep him out of the No. 95 for the rest of the year. Leavine Family Racing hired Regan Smith to substitute for the injured Kahne.

Smith, who hasn’t raced since subbing last year for Aric Almirola in a handful of races, had his hands full. With rain washing out Saturday, he had no practice or qualifying time before strapping himself in on Monday. With that in mind, Smith did a serviceable job of keeping out of trouble and finished 20th.

How… did Brad Keselowski win this race?

A clutch driver with tires will almost always beat a driver with clean air at Indy. A little bit of luck of having a second restart to get close to Denny Hamlin before Hamlin could drive away helped seal the deal.

These two wins really couldn’t come at a better time for Keselowski. With the Big THree looking weaker than at any other point this season, especially Truex, Keselowski is riding a major wave of momentum heading into the playoffs. This win should establish him as one of the favorites for the rest of this year.

The No. 2 Ford is not as consistently fast as the No. 4 Ford or the No. 18 Toyota, both of whom can win any race, any week. But what Keselowski and crew chief Paul Wolfe lack in speed during the bulk of the race, they make up for in strategy and a knack of making their car work the best when the most points are on the line.

Why… is this going to be a crazy first playoff round?

Now that the playoff field is set, and with Hendrick Motorsports’ momentum stalling since the week off between Bristol and Darlington, this is going to be a very interesting 10 weeks to watch.

One interesting note: The four top seeds of the playoffs (Kyle Busch, Harvick, Truex, and Keselowski) were also the Championship 4 last year. The more things change, the more they stay the same I guess.

Kurt Busch and Bowyer both looked to have the race in their hands at various points today, especially Bowyer, but both will be starting the playoffs with just 12/11 point cushion from the cut-off line. Who is 13th and behind said line? Hamlin, who was this close from winning today.

All that’s known for certain, however: these next two races are going to be critical. Not only because of the obvious (momentum is the key to any playoff run) but also because I don’t think anybody wants to be on the bubble entering the ROVAL race at Charlotte at the end of this month. That might be the most unpredictable race in NASCAR’s history probably since the first race at Talladega; whoever wins at Las Vegas and Richmond will be breathing sighs of relief in Victory Lane.

Maybe start and park after losing two laps because of slow speed might be an option..

Does anyone miss Danica or “most popular”? Love seeing Chase Elliott and all of Hendricks brats lose.

Interesting to see that even after she’s gone peoplle still talk about her. More than 95% of those who weren’t successful in Nascar. Oh well.

For all the wrong reasons.

Everybody gets their 15 minutes. Perhaps Nascar would be more successful if it weren’t perceived to be a good old boys club. Both in the garage and in the stands.

It was way too much longer than 15 minutes.

The back-markers are a part of the sport. When you can’t field a 40 car field at many races anyway you wind up with some very slow cars. Exactly why did everyone think they needed a charter anyway?

It sucks when the back-markers wreck each other and have a huge impact on the finish of the race but just remember that it wasn’t that long ago that Furniture Row was a perennial back-marker. Things can change and if you can make the field then you should be allowed to compete as long as you can afford the gas and tires to continue.

My son coined the phrase “Turn 5” to refer to Derrick Cope in the Starcom ride a couple of weeks ago at Darlington.

I thought Denny was a bit harsh in his post race comments and I’m sure those guys are going to remember it when he is in a heated battle and he comes up to lap them. Karma is a bitch, just ask Stenhouse.

Here’s the thing though. Look at the top 20 in owner’s points right now and how early each organization found success, and how many puttered around for years before succeeding:

Joe Gibbs Racing- Won a Daytona 500 a year after forming

Stewart-Haas Racing- Won multiple races in year one of operation. Not counting HAAS CNC as the same team because the team itself doesn’t, and SHR was basically rebuilt from the ground up.

Furniture Row Racing- I’ll give you that

Richard Childress Racing- Okay, but they became a different team after hiring a first class HOFer and a current nominee as their first two drivers after Richard retired

Chip Ganassi Racing- Competed for a championship with Sterling Marlin in year two before he got injured.

This whole idea that you need to build from the ground up to run a successful Cup team or that it can take years to be a success in Cup is a myth. It turns out the best way to be a successful Cup team is to either be around for 65 years like the Wood Brothers, be a rich businessman/legendary football coach, or hire a Hall of Fame driver like RCR and SHR did. FRR is an anomaly from the standard, and while that doesn’t mean teams like Rick Ware Racing or Starcom could join them down the road, it’s incredibly unlikely.