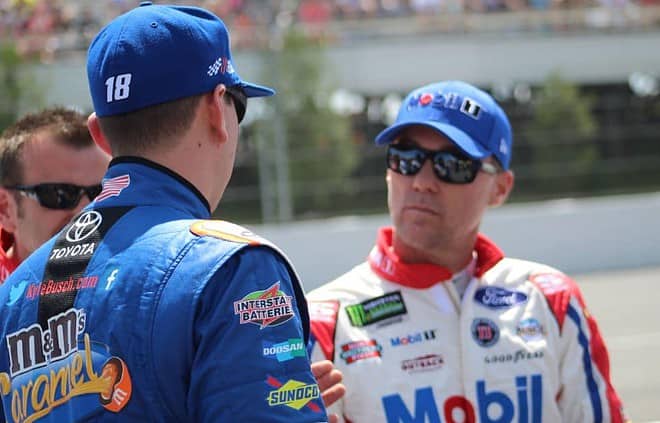 5 Points To Ponder: In The 2018 NASCAR Playoffs

ONE: Should We Fast-Track The Big Three Straight To Homestead?

Never in the five-year history of NASCAR’s 16-driver playoff format have we seen three wheelmen so far ahead of the pack. Kevin Harvick, Kyle Busch and Martin Truex Jr. start the 2018 Monster Energy NASCAR Cup Series playoff as overwhelming favorites. They won 17 of 26 regular-season races (65 percent) and have at least a 16-point edge on every other driver in the field. For Harvick and Busch, that number jumps to 31.

Among this trio, it’s Truex who is clearly the most vulnerable. He’s matched a season high with four straight finishes outside the top 10 after running dead last at Indianapolis. Furniture Row Racing shutting down as soon as the season’s over will serve as a massive distraction once it edges even closer. None of Truex’s four wins this season have come at any of the 10 tracks making up NASCAR’s postseason schedule.

But the No. 78 team will have passion on its side; they’re highly motivated to end their MENCS tenure together with back-to-back titles. Harvick and Busch, meanwhile, have never posted back-to-back finishes outside the top 15 all season. Combined, they have wins at seven of the 10 tracks on the postseason schedule this year (including the Charlotte oval, not ROVAL). So the chance of two straight disasters plus a winless three-race round for each of them… you have a better shot of the Browns winning the Super Bowl.

So yes, fast-track Busch and Harvick straight to Homestead. Truex? Tab him as “likely” but stranger things have happened.

TWO: Can Team Penske Keep Up Its Sudden Burst Of Momentum?

After a full year-plus of getting their ass kicked by Stewart-Haas Racing, it appears Team Penske is waking up a bit. Brad Keselowski has now won back-to-back races for the first time in two years and padded what’s becoming a Hall of Fame resume. Wins at Darlington and Indy, including the first at that open-wheel mecca in NASCAR for owner Roger Penske? That’s one special two-week stint that eases the pain of what has been to date a disappointing season for that program.

“My team executed everything perfectly,” he said Monday (Sept. 10) at Indy. “Caught a little bit of break, but we put ourselves in position for that break and then executed before and after it.”

Few people do pit strategy better than Keselowski and crew chief Paul Wolfe; their team has also executed on pit road these past few weeks. It allowed them to steal victories from right under the noses of both Kyle Larson and Denny Hamlin.

The problem is Keselowski wasn’t the dominant car in either of those events. In fact, he hasn’t led the most laps in any race since Michigan back in August 2017. That’s important considering running up front equals stage wins and additional playoff points. In a postseason where two, maybe three spots, are already spoken for at Homestead, those bonuses make a big difference.

The big assist in Keselowski’s corner will come in the Round of 12. He led 108 laps at Dover in the spring, making him a favorite in that race and then is the active leader in victories at Talladega. A win at either of those guarantees a spot in the Round of 8 where, well, anything can happen.

His teammates advancing are far less likely. Joey Logano has shown consistency, not speed thus far in 2018; top-10 finishes won’t get the job done. Ditto for Ryan Blaney, who has eight straight top-15 finishes but zero wins in his first season with the program.

A silent summer has allowed other drivers to slip in the Championship 4 conversation. But back in June, people were claiming Clint Bowyer had the inside edge on that fourth Homestead slot.

He still has it. Bowyer could have won two of the last three races if pit road and restarts went his way down the stretch. He remains in a position of strength, seeded fifth behind just the Big Three and Keselowski. That gives him a much-needed boost in a bid to make it through the Round of 12; a 15th at Kansas and a crash at Talladega show he could be vulnerable there.

But if Bowyer makes the Round of 8, watch out. He won Martinsville in the spring and sweeping there gives him an automatic ticket to Homestead. He was sixth at Texas and ninth at Phoenix this year which gives him an average finish (5.3) in that round rivaling the Big Three.

Kurt Busch, by comparison appeared to peak with the win at Bristol. He lacks both the consistency and playoff points to truly contend. And Aric Almirola, while a nice story, could eke out an upset victory in the Round of 16 (Richmond?) but should stall out in the Round of 12. He’s stumbling into the playoffs with just one top-10 finish in the last six races. Give credit where credit is due, though; he already has more top-10 finishes (10) in the No. 10 car than Danica Patrick earned in five years.

FOUR: Buy Or Sell On…

Charlotte ROVAL being a wild card. SELL. Will it be a survivor-type race? Absolutely. It’s also more likely someone outside the postseason, like an AJ Allmendinger pulls a surprise – even more so than Talladega. It’s unpredictable, drivers are struggling to stay on track and who knows if there will even be course changes during the race weekend itself.

But at the end of the day, this Charlotte ROVAL is too early in the postseason to be a true wild card. The edge the Big Three have over 13th in the standings is 32 and 47 points, respectively. One crash at Charlotte can’t take them out of contention. Everyone else seems to be a level below so any of them missing the Round of 12 won’t be a gargantuan surprise.

Denny Hamlin. SELL. Hamlin showed some signs of life at Indy but hasn’t flashed consistent speed. He also starts in a hole, 47 points behind Truex and Harvick and outside the top 12 cutline. His first track, Las Vegas, is a place where the driver of the No. 11 Toyota has almost as many career starts (13) as laps led (14). Now here’s a driver I can see spinning out in the Charlotte ROVAL and missing the Round of 12. Disappointing year for him where the confidence inside the program just hasn’t been there.

Jimmie Johnson. SELL. Our Dustin Albino had a post-race chat with Johnson on Monday at Indianapolis where the seven-time champ said he was “off the radar.” He’s exactly right. Suffering through a 49-race winless streak, he’s led just 29 laps, the lowest total of his career. The Chevy Camaro is down on short-run speed, much needed during late-race restarts in these playoffs. And the formidable Johnson-crew chief Chad Knaus duo don’t even have a sponsor yet for 2019. The bigger question here is whether they’re even able to win (Dover?) before the year is out.

Chevrolet. SELL. Chase Elliott has been at his best, historically, in the playoffs. Kyle Larson‘s year has been defined by missed opportunities. But neither one has cashed in this year on intermediates. Larson has come the closest, leading 101 laps at Kansas in the spring. But he’s also vulnerable in plate races, crashing twice and finishing 19th in the Daytona 500 which could sink his chances in the Round of 12 at Talladega.

Elliott, still boosted by that first win of his career at Watkins Glen could surprise into the Round of 8. He’s likely Chevy’s best hope but was a 10th-to-12th place car in the regular season on many of the intermediates in NASCAR’s postseason. That won’t get it done.

SELL… Erik Jones, Alex Bowman and Austin Dillon. I didn’t mention them because they won’t be around long enough to matter. Jones has speed, 10 times more than the other two, but it’s his first playoff appearance. He needs to take his lumps.

Who is your pick to win it all? 🏆 pic.twitter.com/0T1TDFt1bC

FIVE: Who Makes It To Homestead? And What About Those Non-Playoff Drivers?

It’s Busch, Harvick, Keselowski and Bowyer in a minor surprise. Truex gets knocked out when Bowyer wins in the Round of 8 and the No. 78 stumbles during that three-race stretch. I’ll go with Harvick over Busch, mano-e-mano in a Homestead battle for the ages. But you can basically flip a coin between the two.

And as for everyone else? The focus should be on another strong crop of drivers getting ready to leave us. Kasey Kahne may not even be back in a car for more than a race or two after his health struggles with dehydration. Jamie McMurray is almost certainly running his final full-time Cup Series season. Elliott Sadler is winding down a stellar NASCAR career over in the XFINITY Series.

And who knows what will happen to both Matt Kenseth and Ryan Newman? Another set of fan favorites leaving could bring another small hit to the sport’s popularity.

The author of Bowles-Eye View (Mondays) and Did You Notice? (Wednesdays) Tom spends his time overseeing Frontstretch’s 30 staff members as its majority owner. Based in Philadelphia, Bowles is a two-time Emmy winner in NASCAR television and has worked in racing production with FOX, TNT, and ESPN while appearing on-air for SIRIUS XM Radio and FOX Sports 1's former show, the Crowd Goes Wild.
@NASCARBowles
Previous Don Panoz Dead at 83
Next Nitro Shots: The Countdown Is On