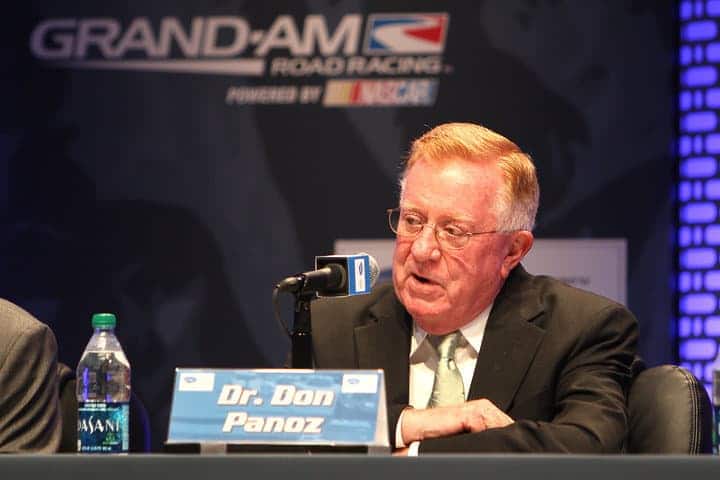 Dr. Don Panoz, Vice Chairman of IMSA and founder of the American Le Mans Series and Panoz Automotive, died on Tuesday after a bout with cancer.  He was 83 years old.

Panoz was successful in a number of different industries, from pharmaceuticals to hospitality.  He co-founded Milan Pharmaceuticals as a drug distribution company in 1961 at the age of 26 in West Virginia.  Today, that company is known as Mylan, best known for marketing the EpiPen.

After leaving Mylan, Panoz created Élan Corp., an Ireland-based pharmaceutical company.  His biggest accomplishment there was the development of a transdermal patch back in the 1970s, which can provide time-released medication through the skin to patients.  Today, this type of medication is most recognizably used as a stop smoking aid under brand names such as Nicoderm CQ.  The technology is also used for birth control and pain relief, among other uses.

Panoz first entered the auto industry (along with his son, Dan) with the founding of Panoz Auto Development in 1989, now known as Panoz, LLC.  The company builds limited-production sports cars and roadsters.  Likely the most recognizable car from the company is the Panoz Esperante, a two-seat coupe sold starting in 2000.

Panoz first discovered motorsports when he traveled to France and went to the 24 Hours of Le Mans.  Enthralled by the pomp and circumstance, he wanted to have an American equivalent.  Panoz first got involved in racing with the wild Panoz Esperante GTR-1, a front-engined GT1-class entry that debuted at Sebring in 1997.  After an auspicious start, the team started winning races quickly.

With the death of the GT1 category, Panoz switched to LMP900 prototypes.  The Panoz LMP-1 was a front-engined prototype, the first from a major team in over 30 years.  The loud Élan engines were the car’s trademark, but it was very quick as well, challenging the Audi R8s of the time.   Later on, the team switched to the GT class with a racing version of the Esperante.

Following the end of Nissan’s factory-backed Garage 56 effort at Le Mans, Panoz took over the DeltaWing project, created a new version with a roof, and raced that competitively through the end of 2016.  Today, the rechristened Team Panoz Racing races the new Panoz Avezzano GT4 in Pirelli World Challenge’s GTS class.

Outside of sports car racing, Panoz was involved in open-wheel racing as well.  The company produced the G-Force chassis for use in the Indy Racing League (now the Verizon IndyCar Series).  They also produced the DP01, which was used in the final season for the Champ Car World Series in 2007.

Sports car racing in the United States was in a tough spot at the time Panoz entered the scene.  Ownership of IMSA had changed hands multiple times in a short time.  Andy Evans assumed control in 1996 and moved to change the name of the sanctioning body to Professional SportsCar Racing at Sebring in 1997, after the season had started.  Within a year, Evans had proven so difficult to work with that a rival series, the reborn United States Road Racing Championship (USRRC) with SCCA sanctioning, launched for 1998 and claimed the Rolex 24 at Daytona as their marquee race.  Much like the CART/IRL split of a couple of years earlier, there were two separate series running nearly identical equipment while sports car racing as a whole was in decline.

It was in this environment that Panoz stepped in and launched his vision that eventually became the American Le Mans Series.  It started with his purchase of Road Atlanta in 1996, which served as the centerpiece of Panoz’s motorsports holdings.  A substantial renovation of the facility saw the circuit modernized with a new pit lane and the ultra fast “Dip” replaced with a chicane.  Terrace seating was also installed.  The facility reopened with a special one-off race in 1998, the first Petit Le Mans.  Panoz also eventually controlled Sebring International Raceway and Mosport International Raceway (now Canadian Tire Motorsports Park).

In 1999, Panoz launched the ALMS.  With Professional SportsCar Racing having collapsed at the end of 1998, it effectively served as it’s replacement.  Racing with Le Mans rules in the United States was a foreign concept at the time and took some getting used to, but it ultimately caught on.  Meanwhile, the USRRC died midway through their second season.  Current interim NASCAR CEO Jim France helped launched Grand-AM to replace the defunct USRRC.

For the first few years, the series was vibrant with high car counts as ALMS ran similar equipment to Grand-AM through 2002.  However, as time went on, the two series diverged, forcing teams to pick and choose.  Car count dropped off and their TV deal deteriorated to the point where most races were only available on the internet.  Eventually, in 2012, ALMS and Grand-AM began merger proceedings that ultimately formed the current version of IMSA.  Panoz was invited to stay as Vice Chairman of IMSA after the deal was completed.  As part of the deal, Road Atlanta and Sebring were placed into the ownership of IMSA Holdings, LLC.  Canadian Tire Motorsports Park was sold to a group that included Ron Fellows.

Panoz’s position in the history of American sports car racing is very important.  He provided the catalyst to allow it to recover from the doldrums of the late 1990s.  A number of drivers posted their thoughts about Panoz on Twitter upon hearing of his passing.

RIP Don Panoz. I was fortunate to race for Dr. Panoz at Petite Le Mans in 2005. Few people have done more to support sportscar racing on this planet.

Thank you Don. For your wild creations, your humor, and your passion for sports car racing. For my first "contract" for $20 and later a real one. For what you have given to so many in our corner of the racing world. Without you, we wouldn't have what we have today. Thank you.

So sad to hear of the passing of Dr. Don Panoz. He had such a personal impact on my life as well as my families. His contributions to racing were obvious, however his care for people are what leave a lasting impression on me. His presence and humor will be greatly missed.

Saddened to read the notes of Dr. Panoz’s passing. Grateful for the contributions and passion Don brought to our sport. I am sure many will raise a glass in his honor at Paddy’s this Petit Le Mans. #Sláinte

Panoz is survived by his wife Nancy, five children, grandchildren and great-grandchildren.  We at Frontstretch send our condolences to the Panoz family.