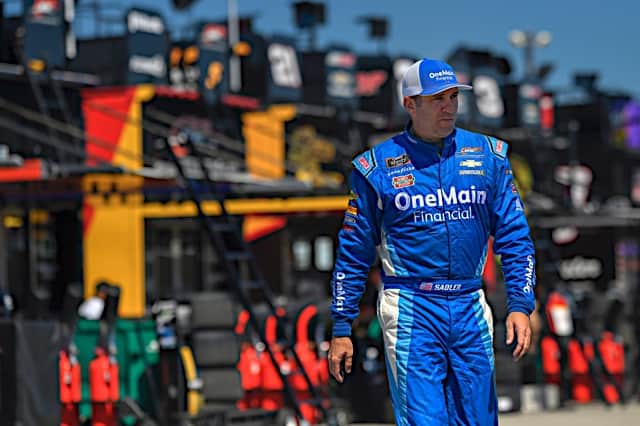 Just under a month ago, Elliott Sadler announced he was stepping away from full-time NASCAR competition following the 2018 season. Since then, he’s had a lot of time for reflection.

Sadler, 43, has spent more than half his life traveling the NASCAR circuit, spending 12 full seasons in the Monster Energy NASCAR Cup Series — the elite racing series in the country. However, the Virginia native made the NASCAR XFINITY Series his stomping grounds, thus far finishing second in the points four times, with 13 career victories.

Sadler’s biggest reasons for stepping away is to spend more time with his beloved family — getting to see his two children, Wyatt and Austyn, grow up, hoping to watch them live their own dreams.

But Sadler’s NASCAR legacy won’t be forgotten. He just hopes people recognize that he did it his way.

“I want people to know that I did it the right way and did it the fair way,” Sadler told Frontstretch last weekend at Indianapolis Motor Speedway. “I enjoyed myself. I love this sport and had as much fun as I could have doing it. I’ve definitely cherished the fans who have voted us the most popular driver, or walk up to me in a restaurant and shake my hand, or people telling me, ‘You’re my kids hero.’

“All those little things that wouldn’t have happened to me if I just stayed at home. I hope they remember me of being a guy’s guy who did it the right way.”

Indeed, the right way. Sadler started off his national touring career at South Boston Speedway — his hometown track — finishing eighth in a family-owned ride. His first full-time season in the XFINITY series came in 1997, scoring the pole in the season-opening race at Daytona International Speedway. He drove the No. 29 to three victories in his rookie year, ending the season fifth in the championship standings.

The young hot shoe spent an additional season in the XFINITY Series before jumping to the Cup Series in 1999, competing for the historic Wood Brothers Racing. In 2001, he scored his first Cup victory at Bristol Motor Speedway, the company’s first win in eight years, dating back to Morgan Shepherd in 1993 at Atlanta Motor Speedway.

Nearly two decades later, Sadler is still battling for victories and even the championship. Sure, there have been some tough moments along the way, but he did his family proud, though he’s not sure if he lived up to everything he wanted in the sport.

“I definitely have a career of would have, should have and could have’s,” Sadler said. “I’ve been close in some Daytona 500s. I finished second in the XFINITY Series points four times, that could have easily gone the other way to be championships. There’s definitely some things that I could have definitely done better or have better finishes. At the end of the day, I have no regrets.”

Sadler believes missing out on a few race wins at the World Center of Racing, specifically 2009 when leading on the last lap of the Daytona 500, only to finish fifth, was a few of the lows of his career. He also thinks the second-place finish in the XFINITY championship last year to JR Motorsports teammate William Byron was a low, when Ryan Preece slowed him down enough with 10 laps to go that he couldn’t race for the win.”

Through it all, the 17-time NASCAR winner stays positive.

“I’ve got to practice what I preach,” Sadler said about staying positive despite heartbreaks in the sport. “I tell my kids all the time when I’m coaching that you’ve got to stay positive, you’ve got to move ahead, and you learn from your mistakes. I’ve got to do the same thing as well.”

The experienced driver still believes it’s been a successful year.

“It’s been pretty good,” Sadler said. “To lose both races at Daytona by as close as we did. [At] Talladega [Superspeedway], we were leading and almost got wrecked on pit road, speeding penalty. At Dover [International Speedway], we were right there. We’ve been close. We want to pull it off. I would give ourselves a B for being fast and consistent, but not going to Victory Lane yet.

“That’s on me, I take that responsibility. I’ve got to do a better job during the race, communicating with my guys to make sure I’ve got something at the end to go after it.”

Meanwhile, the two-year anniversary of Sadler’s last series win is quickly approaching, though he believes that could change at any moment. The last time he was approaching a two-year anniversary of a consecutive winless streak, he pulled the car into the Winner’s Circle at Talladega in 2016 — the exact race he had won two years prior. The No. 1 team won three races that year.

“I think we’re close. We had a decent run the past couple of weeks,” Sadler said. “We’ve got some speed in our cars, so we will continue to try and go down that path.”

Believe it or not, Sadler doesn’t think that announcing his retirement puts more pressure on him to get a victory before his career is up.

“I’ve always put pressure on myself to win because at the end of the day that’s what you race for is trophies,” Sadler said. “No added pressure, just want to do a good job for my guys… The deal with the championship is we know it’s our last hoorah at it, so we can kind of throw caution to the wind. That allows us to go after it and go from there.”

One of the really good guys. Hew will be missed.

Elliot Sadler Wrecked himself, and almost wrecked Preece, when trying to pass for the third place position in last years Xfinity Series Finale. To say “Ryan Preece slowed him down” does not capture the reality of what happened in that case. Elliot made a mistake while William Byron had no issues getting by Preece. Let’s be fair!

I can’t believe Sadler is still blaming Ryan Preece for his not winning that race last season. If he wasn’t fast enough, or good enough to get past Preece, what makes him believe he could have run down and passed the leader for the win!

I met Elliott many years ago at Las Vegas. Class act then and a class act now. Every year since at Las Vegas Speedway I would seek Elliott out in the garage area to talk with him about how his season was going. He is a racer at heart and loves what he has does! I just wish that my racing career could have been even close to what Elliott’s done. Hope he gets the championship that he deserves this year in his last season. If he does, that will be great if not it wasn’t meant to be. If he doesn’t win the championship give the guy the credit he deserves. Like I said earlier Elliott is a racer at heart and loves what he does.

Let’s be honest here, Sadler lost his main sponsor and no other sponsors have been willing to back him. JRM was quick to replace him. He kept a ride in both series because of who he knew, not how good he was.

Elliott…pfft. Milked the baby series for all it was worth! Then whined most of the time. The only reason he still had a ride all these years was because of One Main Financial. Do you really think Kelley and Rick gave a rats butt about him, no $$$$$$$$$$$$. Go pick up your kids from school. You had your turn in Cup and the kiddie series. One MAIN has been more than generous to you. Buh bye.

I remember when the 19 team wanted to get rid of him. Rather than leave when you’re not wanted, like most drivers would do, he sued the team to keep his seat, which, due to the lawsuit, he managed to keep for the rest of that year. Of course, he did poorly – as you would when your team is not behind you. I think that this move (the lawsuit) made him poison to the majority of the Cup owners and that despite how many times he said that his goal was to get back into Cup, he wasn’t going to find a team or an owner willing to take a shot on someone who might sue them if he doesn’t get his way.